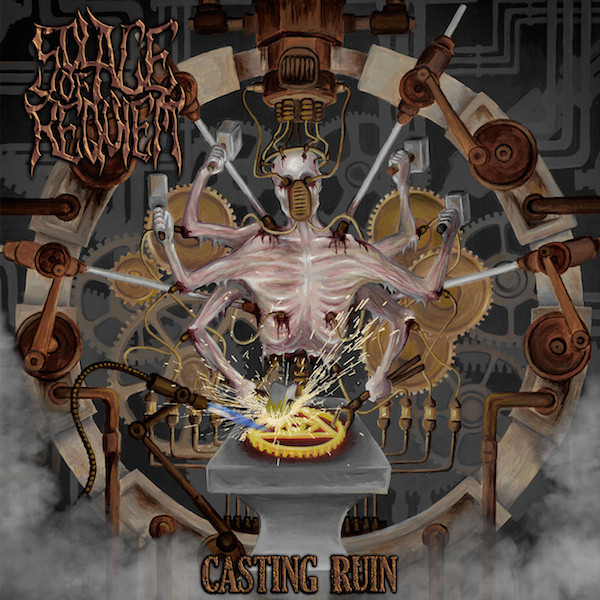 (In this post we premiere a full-album stream of the new release by Virginia’s Solace of Requiem.  Austin Weber provides the following review by way of introduction.)

As a hardcore death metal junkie, I pride myself on my extensive knowledge of the genre. Especially the many underground, unorthodox, obscure, and defunct acts of the genre. As such, I feel like an idiot for being unaware of the Virginia-based group Solace Of Requiem until now. But even in my shame, I can rejoice in having spun their new record, Casting Ruin, numerous times already. To mix my metaphors, it’s a voracious technical death metal beast and a feast for the ears, one whose smorgasbord of sounds has been intricately intertwined into a singular weapon of immense hatred.

Solace Of Requiem write with a diverse array of metal influences, and the in which way they string those influences together in various combinations is the crux of what makes Casting Ruin stand out. Overall, their style weaves around massive bone-crushing columns of racing riffs and brimstone-exploding blast beats, topped off with highly venomous vocals. But to further dissect it, the death metal side of their sound often brings to mind the jackhammering propulsive beatings that Hate Eternal brought to life. In addition, they accent each song with a plethora of aggressive melodic leads and round them out with scathing infusions of blood-curdling black metal blasphemy.

A symphonic undercurrent with classical and orchestral motifs then further enhances most of the songs, including the monstrous savagery present in “Heaving Bile And Ash”. They also display a penchant for beginning and ending several tracks with samples — of such things as chains, clinking machinery, and echoing water droplets. If I had to guess, maybe the cold clang of chains and mechanical whirrings was intended to represent our mental self-imprisonment, societal restraints, and existence as a helpless cog in a larger grinding machine, with the graceful sounds of water drizzling down showing the flip side — freedom and the serenity found freely in nature. 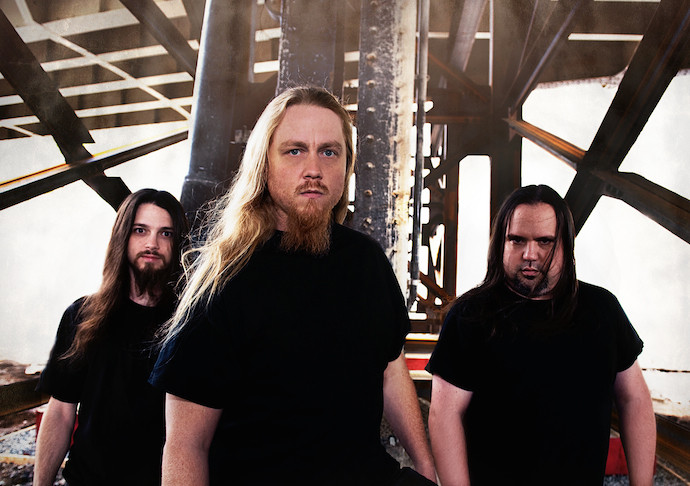 The band’s unique push and pull between frenzied melodies and steamrolling spasms frequently converge into memorable collisions that lend their music the sensation of a roller coaster. The songs on Casting Ruin are largely noncyclical in structure, making for a jagged, twisting mass whose course cannot be controlled or predicted. This lack of repetition in the songs gives each of them a unique depth and flow and makes for a staggering amount of music to absorb.

A highlight of their schizophrenic delivery is “Song Of Shards”, a track that hits a nice mix between skull-crushing technical death and black metal, complemented by a fitting orchestral pulse. The track is a perfect example of how Solace Of Requiem divide their songs, with a constant push and pull between breaking the speed barrier and grooving at a slower pace that’s no less evil and haunting.

“Wading Into Mire”, which explores a prominently black metal terrain, is another great example of the album’s diversity and the band’s ability to combine the facets of their sound in varying mixtures. At first somber and eerie, while later atmospherically focused on a feeling of rot, the song is laced toward the end with a skein of synths that segue into an intriguing tribal rhythm that somehow fits the rest of the song. 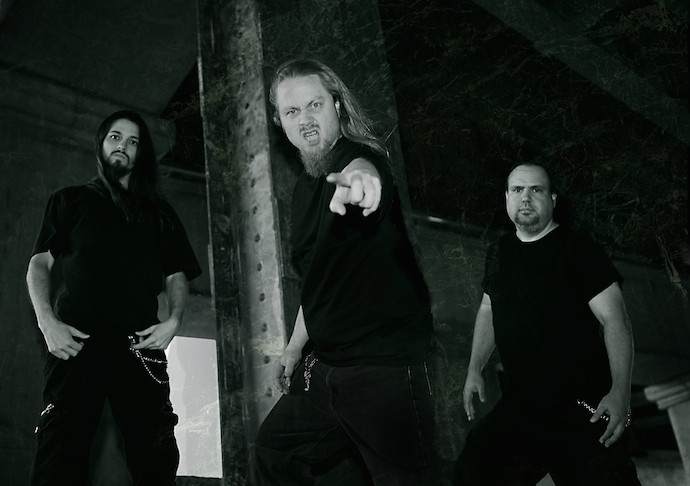 Casting Ruin is a high-caliber album devoid of weak tracks. That makes picking a favorite difficult, but for me “Pools Of Ablation” stands as my absolute favorite of the bunch. A track composed of equal parts thick, rumbling death metal, melodically insane outbursts, epic black metal fury, and tinged with a grandiose choral overlay, it’s the perfect embodiment of the many facets of their sound, even as it differs from the chaotic flow of the other songs due to its more straightforward direction.

While the sound of chains and the echoing sound of water dropping that ends the song is puzzling at first, the next track, closer “Bio-Alchemy”, makes sense of things as it picks up where the previous track ended and layers the soothing watery echoes with simple yet effective guitar strumming. A massive black metal storm then eases in from the lower reaches of sound and swells to a deafening roar, the music soaring with a celestial choral sample that exudes an air of majesty, and culminating with the sounds of water gracefully reverberating again, perhaps in a cave?

Solace Of Requiem excel at crafting advanced-level pummelings that hit so hard they’re akin to the feeling of being violently tossed and crushed inside a cyclone. It’s often unpleasant and cruel, yet even as it tears you limb from limb, Casting Ruin sticks with you — long after your body parts are no longer properly conjoined.

Casting Ruin comes out August 29 through ViciSolum Productions and is available through the following Bandcamp link. Listen to the full stream below.

THIS STREAM WAS PROVIDED FOR A LIMITED PERIOD PRIOR TO THE ALBUM’S OFFICIAL RELEASE AND HAS NOW BEEN REMOVED AT THE LABEL’S REQUEST. IT CAN NOW BE STREAMED AT THE BANDCAMP PAGE LINKED ABOVE.