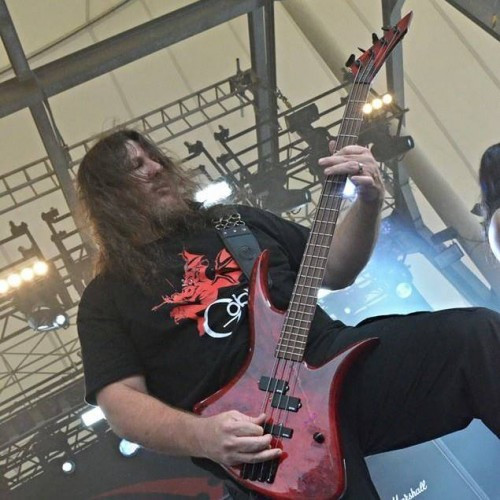 Editor’s Note: Terry Butler has had an enviable career as a metal musician. He was one of the early members of Massacre (along with Kam Lee, Rick Rozz, and Bill Andrews), a band whose comeback album Back From Beyond was released earlier this year. He was a member of Death from ’87-’90, playing bass on Spiritual Healing (which is being reissued in remastered form by Relapse next month); he was a member of Six Feet Under from 1993 to 2011; and he became a full-time member of Obituary in 2011 and appears on the band’s new forthcoming album Inked In Blood, which is due for release by Relapse on October 28 in the U.S.

This week NCS contributor KevinP talked with Terry about Inked In Blood, Obituary’s decision to release it through Relapse after successfully completing a Kickstarter campaign to finance the making of the album, Obituary’s forthcoming tour with Carcass, Massacre’s comeback album, and more.

K: We are less than 2 months away from the new Obituary album, Inked in Blood, how do you think it turned out?

T: I think it sounds amazing. We took our time writing the album, after all it had been several years since the last one, so why rush it. We mixed it ourselves and took time to make sure we liked the mix.

K: It just dawned on me that this was your first album with the band. Feels like you’ve been there much longer for some reason. It’s been over 4 years now, right?

K: Do you think being there that long before recording/writing an album helped you and/or the others?

T: It definitely helped as far as knowing how Donald and Trevor approach writing and arranging songs. I’ve known the guys for over 25 years, so we definitely get along and understand each other. 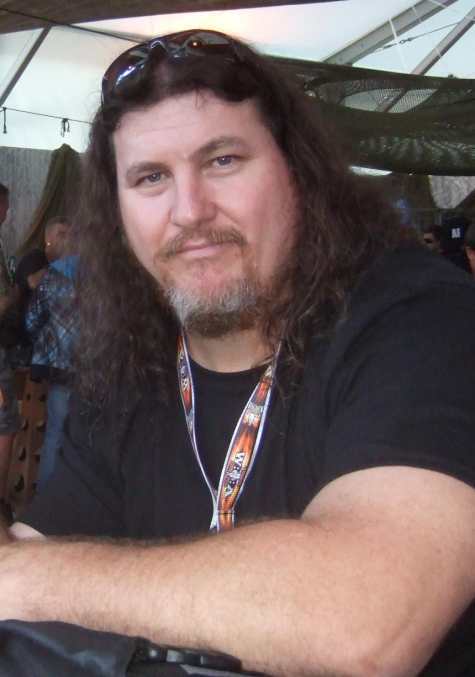 K: Did you contribute to the writing this time around?

T: Not this time. Trevor had a lot of material for the last few years and wrote all the songs. I was there to help put my 2 cents worth in, helping with some arrangements.

K: So you just released the track “Visions in My Head”. Why was this song chosen and how indicative is it of the rest of the album?

T: We’ve played the song live for 4 or 5 months now. It got a great response, so we felt confident releasing it. It’s a good representation of what the album has to offer. It has elements that make Obi what we are.

K: This may sound typical to say, but it has kind of an old meets new sound to it. I hear some elements of Cause of Death (1990) along with what the past 2 albums are doing (groove-wise).

T: That’s what we were going for on that song. Ken Andrews (lead guitarist) really put some cool elements in there. Some of the other songs sound more old school, more like the first 2 albums. Obituary really isn’t going to change too much from album to album. Why would we? We have our own sound and style.

K: Let’s talk about the Kickstarter campaign you held for the album. By all accounts it was an overwhelming success, then you recently announced a partnership with Relapse to release the album. Some people are confused, some are annoyed. I even saw people claiming this was a “scam”. I won’t ever claim to know all the intricate details about what goes into making and marketing a record. But can you clear the air as to why the Relapse partnership?

T: Yeah, people love to run their mouth before they know all the facts.

The partnership with Relapse is so they can help us distribute the album. We have to have some way to distribute it. Just selling it on our webstore isn’t going to work.

Everyone that donated to the Kickstarter gets something depending on what they put in. Some get a free digital download of the album, some get an autographed snare drum, some get to come to the studio and watch a rehearsal, etc…

Every dime from the donations was put right back into the album production and promotion. Obituary have been ripped off so much in the past, this allows us to completely control all aspects of the album. 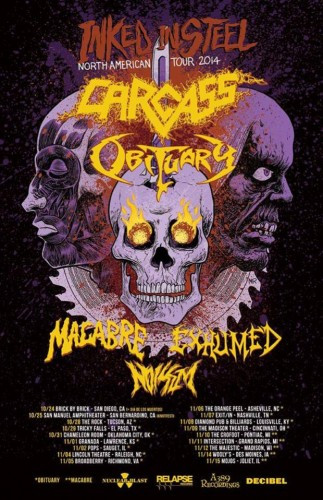 K: So the new tour with Carcass begins the day the album is released, Oct 28. How did that come about?

T: We are great friends with Carcass. I met them in 1990 when they opened for Death in the States. We’ve all stayed friends over the years. They contacted us and offered us the main support slot for their tour, we said hell yeah, of course. We control the release date for the album, so we said: why not the first day of the tour? We will also do some kind of release party I’m sure.

K: In case people forgot, but you are also in Massacre and released a new album earlier this year, Back From Beyond. How’s the response been and how do you feel about it now that you’ve had a few months to reflect on it?

T: Yeah, Back from Beyond came out in April and the response has been very good. Bringing a band back from the dead took some effort but it was well worth it. I think it’s a great album and we are looking forward to playing on the DTA tour and getting our name back out there.

K: Tell me if you find this weird, I do not like From Beyond (1991) at all. Yet I enjoy the new album. I feel the riffs are just better, musicianship is much improved, way better groove, the drumming much more competent.

T: How old are you ??? LOL… that is a bit weird. I mean to me From Beyond is perfect mix of Thrash and Death Metal. Naturally the new album sounds better sonically and Mikey is a different style of drummer than Bill. But I am very pleased to hear you like the new album. At least you like one of them. Ha ha. I respect your choice obviously.

K: I’m an old school elitist prick. But almost everything about From Beyond annoys me. A lot of people I know think I’m nuts, but I know I’m right. LOL.

T: We will agree to disagree. There are albums people love that I think are dog shit. So I won’t hold anything against you.

K: Speaking of DTA , weren’t you supposed to be involved in the original set of dates? What happened?

T: I’ve been asked in the past to do some shows but I was busy with Obituary.

K: So it simply a scheduling issue, nothing else?

T: At this point it has been a scheduling issue. It’s a touchy thing. At first it was a tribute thing now it seems to be turning into a full-time thing. I know the family wants the shows to happen. The purists hate it. 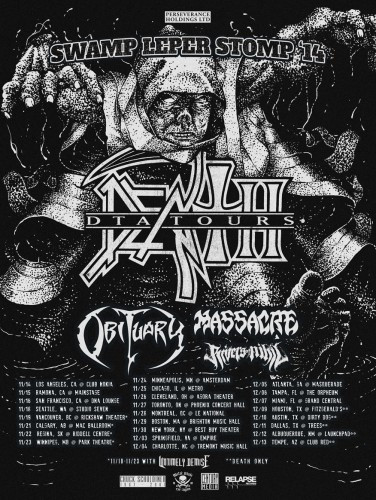 K: I liked the idea of it originally with a limited set of dates; that made it special. But now that it’s a touring band it does kinda rub me the wrong way. Especially since you, James Murphy, and Chris Reifert are not involved.

T: Chris wants nothing to do with it. Rick should be involved as well. Maybe one day. Rick and I helped solidify Death back in ’87. It would be nice to get some of the pie, so to speak.

K: DUH, my bad and my apologies to Rick. I blame it being a crazy day for not mentioning him. I guess I can understand Chris’s point of view, he’s a purist to the extreme from what I know.

T: Yeah, Chris from the start said no. He is a purist. I see his point of view as well.

K: Have you ever really reflected on your career and the bands you’ve been in: Death, Massacre, Six Feet Under, and Obituary. All well-known bands in the genre. It’s like you are always attached to something that is relevant. I’d say that’s pretty damn difficult to accomplish over 20+ years.

T: Yeah I’m very fortunate to have been in some pretty killer bands. When I joined Massacre in ’86 I never thought that I would still be touring or making music in 2014. I still enjoy it immensely. A lot of people from back in the day are gone but there are a few of us old guys left. LOL

The metal gods have smiled upon me. 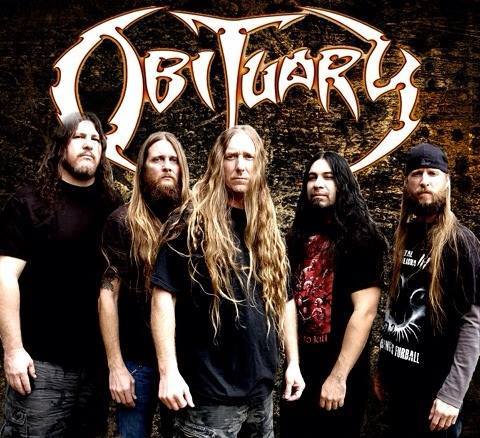 K: I’m no musician, but I’m always fascinated how someone in your position, who’s been in multiple bands that are in the same vein, avoids getting “burned out” on it all. Lots of people get away from the scene for years or they have wildly different side projects to express themselves or to get a change of pace. What’s your secret?

T: Well, its still exciting for me. I have a wife, 3 kids & 4 grandkids. So being away from them is a downside, but I love the idea of a fan coming to the show with some friends to see my band play music. I still get a charge from that. I love to get to the club and do sound check, set up merch and watch the fans file in. There are days when you feel a little beat down from the road or tired and sick, but there are fans out there who choose to enjoy your music, so you have tighten up the boot straps and forge ahead.

K: Is the secret being Too Extreme! or hardcore radikult?

K: So what does your musicial diet consist of these days (metal and non metal)?

T: Well, I’m a child of the ’70s so I like a lot of ’70s hard rock such as UFO, Uriah Heep, Thin Lizzy. I don’t like a lot of the blasting technical stuff these days. It just sounds too sloppy for me. Especially live!!! No disrespect to those bands but I like to hear riffs.

I still love and listen to the classic metal bands such as Mercyful Fate, Venom, Celtic Frost. I’m a big fan of the N.W.O.B.H.M. as well.

K: Terry, thank you for your time and for fanning the grandpa death metal flames. See you on the road with your walker (not Jeff, but an actual walker).

T: Ha ha. Thank you Kevin. See you out on the dusty trail. Cheers