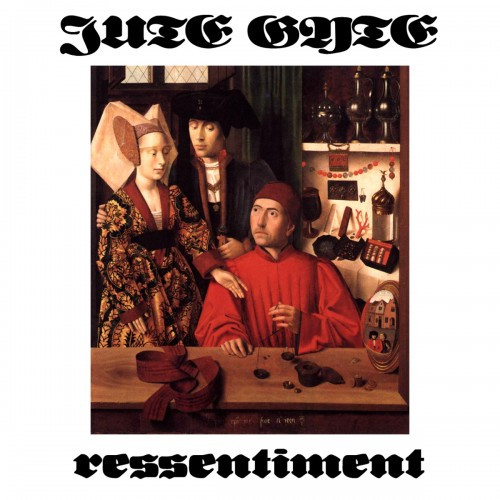 As it stands, this is the third time I have written about Jute Gyte here, the consistently crushing solo project of Missouri native, Adam Kalmbach. After writing up his previous album from this year, Vast Chains, my sense of curiosity led me to email the man behind the band and inquire as to his lack of social media presence. I was greeted with the answer that he, in so many words, has a disagreeable personality and does not play well with others, thus the lack of an official band Facebook page or other account.

I found this very interesting, as it speaks volumes about himself as an artist. If we are being honest, what musician doesn’t want to hear his work praised? Either as a form of validation or as an appeal to narcissism, or both?

It would seem to me that Adam Kalmbach’s desire to stay hidden in the shadows may show how much darker and cathartic of a release creating music must be for him. Further evidence for this suspicion may be found in his lack of press releases. The man drops several releases a year, but because there is no band page or other online presence, the music simply appears without a whisper.

Yet this lack of traditional self-marketing has not stopped me or others from hearing his new albums and spreading the word about this most fascinating project.

Thus, I was happy to receive a recent email from Bandcamp stating that yet another Jute Gyte full-length had just been released. This latest offering of filth,en titled Ressentiment, continues to alter and deconstruct the elements of black metal, twisting them into a far darker art. While whole paragraphs could be dedicated to breaking down the philosophical ideas behind that title, let’s just stick to the music, much as I do love the title and its meaning.

Ressentiment stands as yet another soundtrack to apocalyptic endings and split-second trainwrecks embodied in a tortured microtonal form of black metal comparable to none. Put succinctly, Jute Gyte is a world unto itself, and the nightmare realms explored within are so strongly fermented by disgust that it’s almost too much for the average person to want to venture inside. But for those who crave ugly sounds, Jute Gyte is among the best at creating it.

Like many of his releases, these new songs are of an extended, multi-part nature, covering a range of tempos and vacillating between abyssal faster riffs and swallowing, emptier, shrill chords that scrape at the insides of your brain. Jute Gyte has always had a knack for kicking things off with a stunning massive opener, and in this regard, “Mansions of Fear, Mansions of Pain” lives up to this established trend. Existing as a newly opened wormhole into hell, “Mansions of Fear, Mansions of Pain”, paints with ugly and sour tones, culminating in numerous highly nauseating moments.

Jute Gyte has always left me feeling quite bleak about things; it simply does not let you draw any other conclusions. I would venture to say Ressentiment takes things to new skin-crawling heights, as exhibited on tracks such as “The Central Fires Of Secret Memory” and “Your Blood and Soil Are Piss and Shit”. Meanwhile, the feeling of revulsion Jute Gyte generates with such great fervor also continues within Ressentiment, most notably so on the wicked depths of “Like the Deepening of Frost in the Slow Night”, and it’s explored even further on the cacophonous closer “The Grey King”.

Jute Gyte is music stripped of typical listenability, leaving only the raw guts (from which we largely shy away) to inhabit the entirety of its space. This is truly otherworldly music, as caustic as it comes, and twice as vitriolic as what you’re probably listening to. Ressentiment exudes an aura of horror that burrows deep, transmitting its unsettling nature into your mind with the efficiency of a sickening virus intent on poisoning you to death.

One Response to “JUTE GYTE: “RESSENTIMENT””