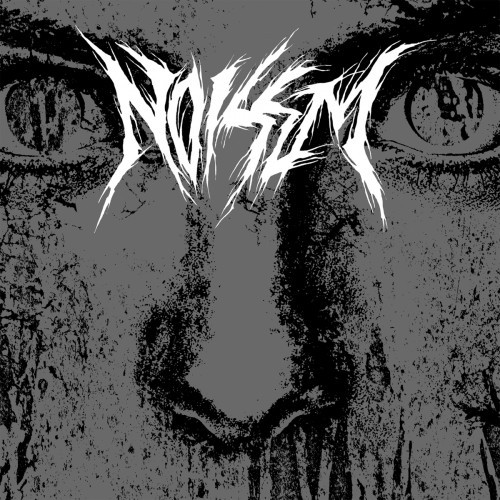 (NCS contributor Leperkahn recently winged his way to France for a period of study abroad — and on the way he penned a couple of reviews, including this one.)

I was just about to get really productive, and start catching up on the backlog of reviews I’ve been meaning to do. I was so ready to get that fulfilling feeling of being back on track, at least in a small part. It was really gonna happen this time – for the first time in a bit of a while, I had the motivation to write, and the emptiness of a couple of long flights en route to Paris to do them. I had it so nicely planned and organized.

Then Noisem released a new 7”, and all of that went to absolute shite.

As I write this (on said plane), I’ve had a digital copy of it for maybe a day at most. I’ve now listened to it probably ten times, if not fifteen. This is a roundabout way of saying HOLY MOTHERHUGGING SHITE THIS THING ABSOLUTELY BLOODY SLAYS.

For anyone who may have feared that last year’s absolutely scathing debut Agony Defined was a fluke, that the positively palpable energy that gushed like blood from a severed artery was merely lightning in a bottle, never to be caught again, rest easy, for some of the material on Consumed very well might top everything else the band has released.

The A side is a new original song, “Consuming”, that mixes AD’s potent blend of balls-out grind, death, thrash, and hardcore punk with a an infusion of early Obituary, jointly expressed in the slower tempo and positively gargantuan riff that hits like an anvil to the skull after the typically light-speed assault that opens the song, and in Tyler Carnes’ vocals, which resemble a mix between his past self and John Tardy.

Oh, and I dare you not to “misplace” some vertebrae as you headbang throughout the pit that your surroundings will inevitably become when you set the needle down (or press play) on this. Also, anyone who makes it past the gang-shouted lyric “CONSUMED BY MY OWN, IN-I-QUI-TYYYYYYYY!!!!!!!!!!!” with his/her vocal cords intact deserves some kind of medal.

The B side varies with complete randomness on this release, being one of three cover songs: Terrorizer’s “Fear of Napalm”, Slayer’s “Aggressive Perfector”, or Cannibal Corpse’s “Skull Full of Maggots”. Two of these come with a bit of personal pride for me (along with the cover of Repulsion’s “Slaughter of the Innocents” that graced a split 7” with Richmond’s Occultist): When I reviewed Agony Defined last year (my first review for NCS), I named five records that came to mind, three of which the band has now covered songs from: Repulsion’s self-titled, Cannibal Corpse’s Eaten Back to Life, Slayer’s Reign In Blood (“Aggressive Perfector” was on the reissue copy of the CD that I bought, which counts in my book), Deicide’s self-titled, and Death’s Scream Bloody Gore.

But anyway, back to the songs (and away from my indulgent, shameless plugs). Noisem stay true to each of these songs pretty faithfully, yet make each their own — so much so that, when listening to the split without paying attention to changing songs, I’ve legitimately mistaken each cover for an original Noisem song (especially the Terrorizer cover, due to its placement on my digital copy right after “Consuming”).

This speaks to Noisem’s success, so early in their career, in implementing a unique character into their riffs and songwriting, so that a Noisem riff is recognizably a Noisem riff, just like you’d know a Tom G. Warrior riff anywhere, or a John Tardy vocal line anywhere, or a Brann Dailor drum track anywhere. It’s this elusive quality that has had me listening to this band time and time again (probably too much for the good of my own health), rather than almost any other new death metal band. It’s the same reason why you listen to Obituary rather than to their second-, third-, fourth-, or fifth-tier knock-offs, why you listen to Entombed rather than any random ninth-generation Swedish death metal band, why you listen to Mayhem rather than any number of miscellaneous black metal demos.

Each of these iconic bands became iconic because they had a unique voice within the style of music they played, even if most couldn’t necessarily be described as “progressive”, at least in the sense the term is commonly used today. This same unique voice lies in every riff and song I’ve heard from Noisem, and that’s what makes them so exciting, and why I’m now listening to the split for the twentieth time in roughly 24 hours.

I’ll conclude with the caption I posted when sharing the Bandcamp link to this split via Facebook:

LISTEN TO NEW NOISEM, YOU FOOLS.

The split is available on red vinyl in the US via A389 Recordings, on gold vinyl in Europe via RSR Records, and blue vinyl with an obi strip in Japan via Amputated Vein Records. Links are below:

I can’t find the Japanese link yet, but it’ll probably be on Amputated Vein’s website at some point somewhat soon.