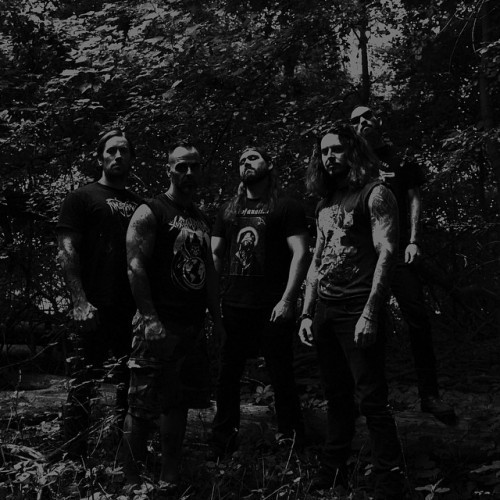 Eric (guitars) was most recently in Knife. But he’s been doing music since he was a teenager, too. One of his early bands was a death metal band called Kathode (that also had Andrew W.K.).

K: So when you formed Temple of Void last year, what was the idea or plan behind it?

A: I wanted to do a doom band that sounded like old Paradise Lost, that was my mission statement. I met Eric, he had a melodic sensibility to his guitar playing, dark and melancholic. He digs Paradise Lost. So we formed the band.

Detroit didn’t have a real doom band active in the scene per se, so we wanted to fill that unearthly void. As we wrote music…well, things never pan out exactly as you expect em to. We’re a lot farther away from the Paradise Lost germ that we planted. But we’re very happy with how things progressed. When you start a band with new people you just have to play to strengths and let the music take you where it takes you. So we incorporated a lot more death metal than anticipated. And fuckin love it.

K: There is a familiarly to your sound, while also maintaining a freshness. I can’t say I hear Paradise Lost myself, but the super-deep growls are very reminiscent of Mikael/Opeth.

A: I don’t think Eric or I could ever put ourselves in the same guitar league as Ackerfeldt and company. But Opeth is a band that we all dig. They’re definitely an influence, but probably more so on a subconscious level.

And it’s great to hear the comparison because Ackerfeldt is my favorite death metal vocalist. Fuckin Bloodbath, man. I think when people throw around comparisons to Autopsy, Bolt Thrower, and Asphyx, that’s probably a better descriptor. It’s cool to read that people pick all that stuff out. It’s definitely part of our DNA. And a few people have mentioned hints of Cathedral, which is interesting to me.

K: What else struck me (besides the quality of the music) was how professional everything sounded. Crystal clear production, everyone is super tight, totally heavy. I was thinking “how is this their debut”? But now knowing your age/background, it makes much more sense.

A: Go listen to a record I did when I was 18. It was garbage. You learn as you mature as musicians just the same as you learn your craft as a professional, whether you’re a mechanic or a painter. You get better with experience.

So putting us in a room together we’d already learned from prior mistakes. And we’re better off for it. When it was time to do Temple of Void, it was all pro from the start.

We recorded at two different studios to capture the sound we wanted. And went to a third person for mixing. So that was a different way for us all to work. It took time… but we think the results were worth it. And a fourth guy for mastering. So there were a lot of hands that helped shape the album.

K: What are you talking about lyrically on the album?

A: Mike writes all the lyrics. He basically culls from horror films, fantasy novels, poetry, etc. And re-tells the tales in his own voice with his own spin. He’s a talented lyricist. We called the album Of Terror and the Supernatural for a reason. That pretty much sums up the lyrical content. Mike’s VHS collection is second to none.

K: Talk about your setup/rig/amps you like to use, and if it differed for this recording than what you use live. We have some uber geargeeks on the site that like to know these things.

A: Eric and I both use Les Paul’s. Only a Gibson is good enough, man. We amped them in the studio through our respective heads (Mesa and Marshall). But we DL’ed (direct input) the signal, too. So then we ran them through an HM-2 and blended the signals. I’m a big fan of DL’ing guitar signals and then experimenting with blending various tones afterwards.

Brent played his Rickenbacker through an Orange Terror bass head. All of us use various effects pedals throughout the album. The phaser is becoming a signature sound we’ve worked into the band.

K: I’m not normally a “cover art” guy, but this is quite striking (to say the least). Who did it and what kind of idea did you give them?

A: Bruce Pennington is an old (literally) fantasy artist. Brent had some work of his and he showed it to the band. We were blown away. He would do a lot of S&S / fantasy novel covers. So we thought fuck it, let’s track this guy down.

We had to go through a middleman to contact him because he’s old and probably doesn’t even use a computer. But we tracked him down and licensed this piece of art from him. It seemed to fit our band, our name, our aesthetic, and helped build towards our own mythos.

K: When the album comes out on Sept 30th, where can people pick it up from (physically & digitally)?

A: The album is being released by Saw Her Ghost records on double-LP and cassette, sawherghost.net And it’s coming out on CD via Rain Without End records, naturmacht.com.

It’s available to pre-order on CD at the moment. And LP pre-orders will be up in the next week or so, I expect. You can also pre-order it on sites like Amazon. It’ll be on iTunes and all that shit.

K: Is the CD version only limited to 300 copies (as listed on Metal Archive)?

A: First press will be 300 on CD. Metal Archives is in fact accurate. First press vinyl is also 300 2x LPs.

K: Any changes planned for subsequent pressings? World domination is hard to obtain via 300 units.

A: Let’s get the first one out and then we’ll discuss future pressings. Yeah, world domination ain’t what it used to be! You used to be able to push 1000 7″s in a month in the 90’s and early 00’s. Now it’s a lot rougher out there and smaller labels can’t afford to press up large quantities at a time.

K: So when can people expect to see you rolling through their hometown?

A: If their hometown is Detroit then probably pretty soon. Same goes for Chicago. We’re going to drop the album in a month and then start promotion. Hopefully start making it further afield. We’d like to hit up some Midwest dates like Milwaukee and Cleveland and play with some headbangers in NY, too. If you want to book us, drop us a line. We’ll fuck up any city we can.

K: Being semi-old farts I figured you might have some connections from the golden days that you could ‘cash in’ on.

A: Yeah. We’re gonna make it happen. We’ve just been working on the local scene prior to the album coming out. It’s harder to tour when all you have is a demo to peddle.

K: Alex, best wishes, hope the kitty is okay, and I have a hankering suspicion I’ll see you around on a tour or festival one of these days.

A: Thanks, Kevin. $200 later and King Cat is doing alright. I appreciate the interview, man. Seriously.

Temple of Void’s Facebook page is here. Of Terror and the Supernatural will be released September 30. It can be pre-ordered here or on Bandcamp via this link:

Check out some music from the new album next: