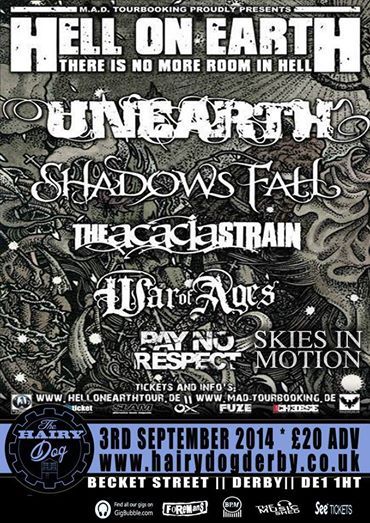 (In this post Andy Synn reviews a live performance from September 3 in Derby, England.)

I kind of knew already this was going to be a good night, even before setting foot out the door.  For one thing I have never, ever, seen a bad Unearth show — the Massachusetts maulers always bring it hard and hit that sweet spot between metal and core every time. Plus The Hairy Dog is a great venue, both sound and layout wise (and the fact that I wasn’t driving, so could enjoy a few beers, definitely helped too!).

But what would really make the evening special, and a tad bittersweet, was the fact that this would be potentially my last chance to see Shadows Fall live, as the band have announced they are going on an extended hiatus from touring. And, you see, Shadows Fall have been one of my favourite bands ever since I caught them supporting Kittie in Manchester back in February 2002, long before the release of The Art of Balance brought them to the attention of the metal-loving public at large, so this show really would mark, in many ways, the end of an era for me.

First up though we had the sweet solos and crunchy breakdowns of War of Ages to contend with.

Cheekily referred to by some (naming no names) as “Baby-Unearth”, the band’s mix of melodic riffs, chugging breakdowns, and heroic soloing certainly owes a significant debt to the headliners, though more recently they’ve started to focus more on clean sung choruses and standardized song structures coming across more like “As I Lay Dying Mk.2”.

The set did focus (unsurprisingly) pretty strongly on material from their last three albums, which appealed a little less to me personally, as those records are the ones which showed the band switching to a much more predictable, mass-appeal style (and they weren’t exactly Cannibal Corpse to begin with), but every song was performed with palpable passion and panache, the band clearly loving every second of their time onstage.

They may not be the most original or unique band on the planet, but I can definitely recommend giving them a chance to impress you live. They bring a real sense of energy and emotion to their live show that should manage to push aside any of your reservations and get your head banging with shameless abandon.

No “All Consuming Fire” though? For shame…

Up next were the breakdowns and… build-ups to breakdowns… of The Acacia Strain. Despite being definitely popular (with a good number of the band’s shirts peppered throughout the crowd), personally the band’s sound does absolutely nothing for me, but I was certainly willing to see what makes them tick live. And, on one level, I can sort of understand it. It’s a simplistic, undeniably heavy, and pretty brutal sound, with little in the way of subtlety or nuance to distract from the ceaseless chugging and rampant misanthropy. It’s perfectly, even cynically, designed to get pits going and fists flying.

And that’s both the band’s biggest strength and greatest weakness – the simplicity of their sound makes for an undeniably effective formula for audio violence, but over time becomes incredibly repetitive, with almost every song based on building from one breakdown to the next, with only the occasional flashes of dissonant melody or shift in speed to break things up.

Added to this is the inadvertently hilarious onstage banter of frontman Vincent Bennett, whose constant carping about how “negative” and “violent” the band are makes him sound exactly like one of the German nihilists from The Big Lebowski (“We believe in nothing, Lebowski. Nothing!”). I mean I get it, they are very much an angry band… but that doesn’t exactly make them special… sweet zombie jesus, but utter negativity is nothing new in the metal scene!

The band’s saving grace is definitely their drummer though, as that man is a machine and his fills and rolls add a ton of character to each song, in spite of how they occasionally run together.

This being potentially the last chance a lot of the audience would have to see Shadows Fall, it’s not at all surprising that the crowd went positively berserk when the band hit the stage, kicking straight into a juddering “Idle Hands” and not letting up until a final, climactic run-through of “War”.

With a setlist primarily split (as far as I can remember anyway) between The Art of Balance (“Idle Hands”, “Thoughts Without Words”, “Destroyer of Senses”), The War Within (“The Light That Blinds”, “Eternity is Within”), and Retribution (“War”, “King of Nothing”), the band were on positively blistering form, shredding, screaming, and battering their way through a set of phenomenal songs that raised the question of exactly why the band never got the recognition (or support) they should have.

Individually the band were pretty much flawless, and even more devastating as a unit, their triple-pronged vocal attack and lashings of high-speed riff work scything through the assembled crowd like a knife through willing flesh, particularly on an unexpected airing of the classic “Crushing Belial”.

Jason Bittner remains, by some measure, one of the tightest drummers I have ever seen live, providing an absolutely rock-solid foundation for the band’s shreddy, thrashy, streamlined metallic mayhem, while Brian Fair continued to prove himself to be one of metal’s most versatile and likable frontmen, switching from vicious shriek to brutal bark to emotive croon without missing a beat.

This was a set that really reminded me, and the rest of the crowd, just how versatile the band’s sound can be, and how feverishly intense their live show is, and emphasised just how much they’ll be missed. Brain Fair assured us that this wouldn’t be the last time we’d see the band, which dulled the pain somewhat, but still… this felt like a fitting, but sorrowful, swansong for a band who never got the credit they deserved.

And so, finally, we come to our headliners. And what more is there to say about the whirling dervish that is Unearth on the live stage? They always bring their A-game, and they always kill it live.

With a setlist built (unsurprisingly) around their seminal album The Oncoming Storm (quite possibly the best metalcore album ever written? Discuss in 500 words or less, and show your work), the band proved themselves to be heavier, tighter, and downright tougher than the majority of their peers, mixing high-velocity melodeath shredwork with brutalising, almost Death Metal level breakdowns and a real sense of righteous indignation.

Ken Susi and Buz McGrath remain one of metal’s unsung guitar duos, trading off fiery licks and buzz-saw riffs with absolute precision, while new drummer Nick Pierce gives the band a new level of intensity, adding his own sense of character to every song while also pushing the band that much harder and faster, not least on a truly vicious run-through of “Watch it Burn”.

Ultimately though it’s Trevor Phipps who really holds the crowd in the palm of his hand, inciting absolute chaos with every prophetic proclamation. From the focussed ferocity of “My Will Be Done” to the darkened fury of “Failure” he has the audience hanging on his every word, whipping them up into an absolute frenzy as his cohorts unleash pure molten metal behind him.

Of course, no Unearth show would be complete without an airing of the near-legendary “Zombie Autopilot” (repeated cries from the audience earning a “shush, it’s coming later!” from Phipps), and the band didn’t disappoint, pairing it with a thunderous “Black Hearts Now Reign” to end the evening with a TKO of primal passion and crushing riffage.