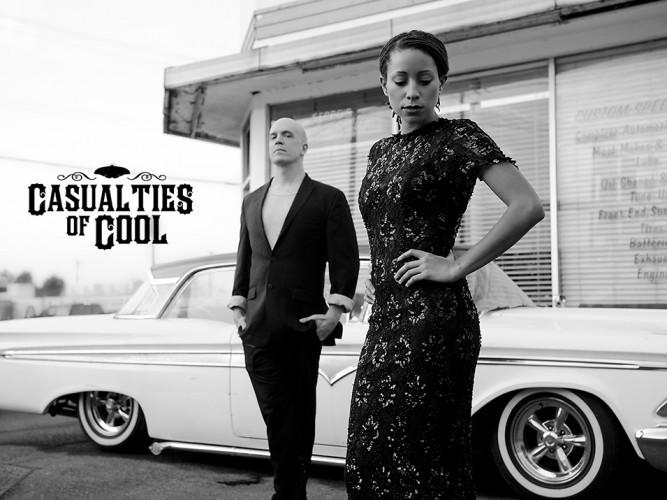 (In this post our man in the UK, Andy Synn, reviews a live September 4 performance in Islington by the collaboration between Devin Townsend and Ché Aimee Dorval known as Casualties of Cool.)

Last Thursday I was lucky enough to see Casualties of Cool, the world’s finest proponents of Ambient Canadian Space-Country, perform a gorgeous, mesmerising set at The Union Chapel in Islington. And it’s taken me a while (I have been somewhat busy/ill in the intervening time) but I’ve finally got round to penning some thoughts about the experience.

To start with, for those of you who don’t know, the venue itself is pretty magical, a beautifully apportioned and enclosed chapel with rows of pews on ground level before the stage (and pulpit) and several more on balconies up above. The stained glass windows and hanging wrought-iron chandeliers add a touch of weight and worth to the surroundings, while the candles flickering in alcoves in each overhang only enhance the warmth and beauty of the place.

When it came to the show itself… well, there’s a reason this was sold under the title Casualties of Cool, and not under Devin’s own name. Because for once this really wasn’t a Devin Townsend show.

Even apart from some inadvertently hilarious technical issues right as the band were about to come onstage, the whole feel of things was very different from what you might have expected from a Devin Townsend show (barring maybe the similarly entrancing show for Ghost held in this same venue some years back).

Though Devin himself was as warm and as welcoming as always, ultimately he opted (after some friendly cajoling) to let the music do the talking this time around, operating more as lead guitarist/co-vocalist than the de-facto frontman we might be used to, and allowing his collaborators, particularly the wonderful Ms. Ché Aimee Dorval (with whom I’m now ever so slightly in love), to occupy their own share of the limelight.

Ché’s interactions with Devin were themselves a highlight of the evening. Whether she was softly admonishing him about talking too much and telling him he was only allowed to say thank you “three times”, or exchanging simple smiles during the quietest moments of the set, it was obvious that this was a collaboration and a friendship that brought great joy to both of them.

Her voice was, in many ways, the real star of the show. Soulful and captivating… at times wistful and ethereal, at others overflowing with raw emotion… she brought the audience to the brink of tears and the edge of rapture time and time again, whether during the sublimely beautiful “Flight” or the melancholy strains of “Bones” – two of the night’s high points in an evening brimming with memorable moments.

Indeed, the whole set was particularly memorable not simply because of the elegant grace of the performances, but because each of the songs from Casualties of Cool was changed and reinterpreted for the evening’s performance. It wasn’t just a repeat of the album, it was a reworking and a remaking of it, done purely for the live setting. And that made it very special indeed.

Songs were performed slightly slower, or faster… given extended intros or drawn out jam segments… sung lower, or higher… just ever so slightly differently than on record, giving the whole thing a much more improvised and unique flavour quite unlike the regimented tightness of Devin’s more metallic live offerings.

Despite the fact that the show must have been well-rehearsed beforehand, such were the many layers of ambience and atmosphere added and woven into each song, the whole set still retained a feeling of freedom and spontaneity that meant the audience felt they were witnessing an event, something that, even when seen again, would never be seen in quite the same way.

Utterly mesmerizing, sublimely moving, and almost magical, this was a very special, very unique night, not just for me, but for everyone lucky enough to be in attendance.