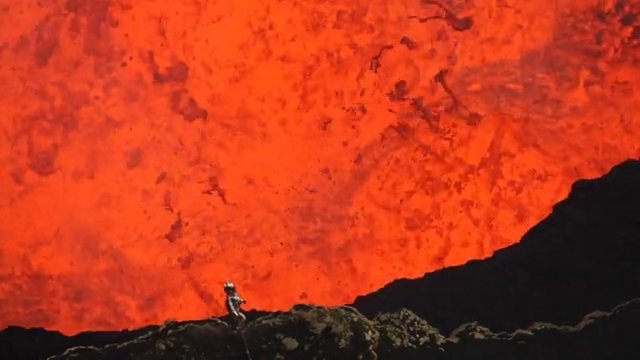 I don’t think I have to explain why this is metal. I’m including a second video that shows different scenes from the same excursion.

Diving into an Active Volcano from Sam Cossman on Vimeo. 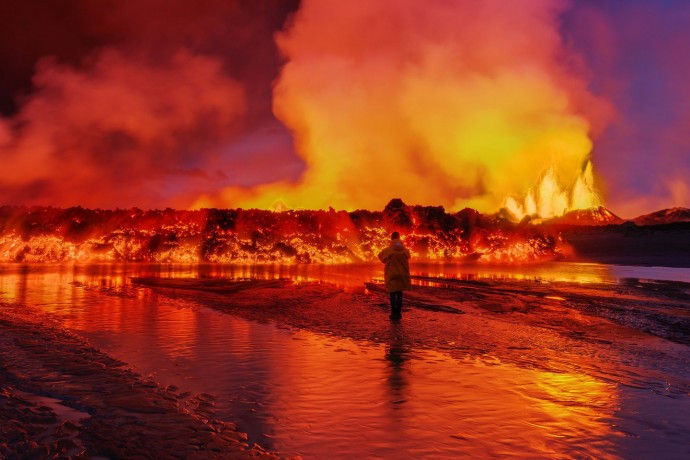 While on the subject of films of active volcanos, I have another one for you, but we’re moving dramatically northeast from Vanuatu for this one.

Iceland’s Bardarbunga volcano has been erupting since Aug. 29 of this year, with lava being ejected from the Holuhraun lava field located about halfway between Bardarbunga another volcano named Askja. Reports indicate that the lava has been flowing out of the collapsed crater of Bardarbunga in a nearly 30-mile long dyke before reaching the Earth’s surface. This event has made possible dozens of fantastic photos, one of which you can see above. Other wonderful photo collections are located here and at the web site of writer/director/producer Jon Gustaffson.

Gustafsson also filmed the eruption from a helicopter on September 4, 2014, shooting over the shoulder of another filmmaker. He made the video you’re about to see, which is set to music by Veigar from a short film named In A Heartbeat.

Volcano at night – Iceland September 4 2014 from Jon Gustafsson on Vimeo. 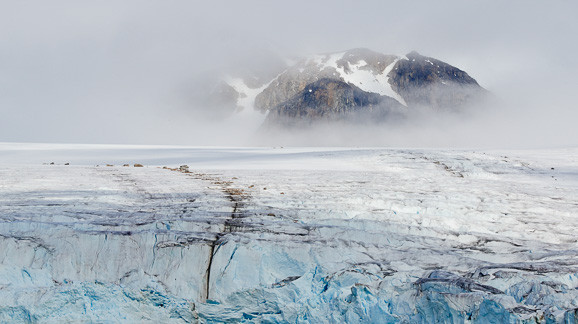 Peter Cox is a Dublin-based photographer and photo instructor who occasionally leads workshops in remote places. In July of this year he took 11 students with him on a chartered vessel into the Svalbard archipelago of Norway in the high Arctic. He filmed parts of the expedition using a pair of GoPro Hero 3+ cameras, one of which was mounted on a DJI Phantom 2 drone for aerial shots, and created a short video of the trip that I’ve embedded below.

The development of GoPro cameras and drones such as the DJI Phantom has made possible some amazing videos, and this one is spectacular. It includes not only the amazing Brasvellbreen ice wall with a river running through it and down into a waterfall, but also some pretty cool shots of Arctic wildlife. I’d love to go on a tour like this someday, even though I don’t know shit about photography.

Svalbard – The High Arctic from Peter Cox on Vimeo.

Ah yes, the majesty of nature. It produces volcanos and ice walls and… oh, shit. 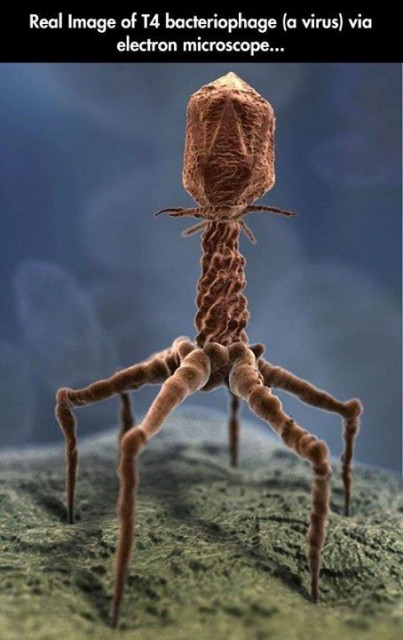 As you can see, this is billed as a T4 bacteriophage photographed with an electron microscope (probably colorized). According to The Font of All Human Knowledge, bacteriophages are viruses that infect bacterial cells and destroy them. So I guess maybe they’re our friends. But shit, that’s scary looking. Sort of like this, which was drawn by Nathan Rosario. 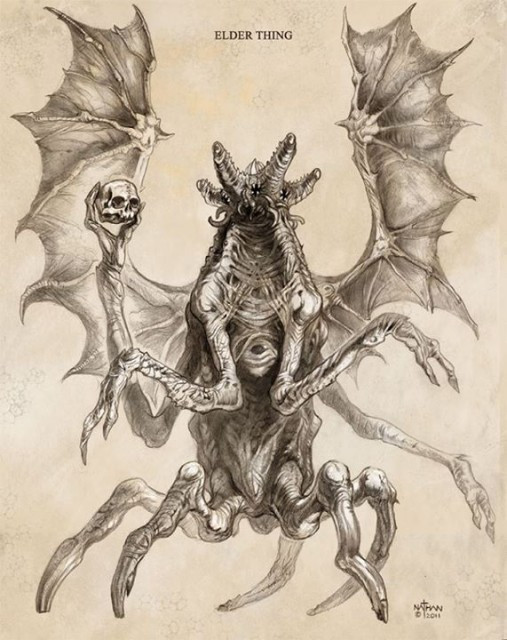 Or maybe like what appears at the beginning and end of this hilarious video (thanks Andy):

To maintain proper symmetry, let’s move from the microscopically small to the really really really large. I’m talking about what may have been the largest animal ever to walk the Earth: DREADNOUGHTUS.

In the following recent video, Drexel University professor Ken Lacovara describes “a new supermassive dinosaur species he discovered and unearthed with his team between 2005 and 2009”. “Weighing in at nearly 65 tons, Dreadnoughtus schrani is the largest land animal ever found of calculable mass and also by far one of the most complete skeletons ever found for a dinosaur in this mass range!”

The fossil skeleton was discovered in southern Patagonia in Argentina. The living creature was estimated to be 85 feet (26 m) long, and the skeletal evidence shows that it wasn’t even fully grown at the time of its death. More information is available here.

By the way, Dreadnoughtus was a plant eater. Last week also brought reports of the discovery of new fossil evidence extracted from the Kem Kem fossil beds in eastern Morocco of the largest known carnivorous dinosaur, Spinosaurus. At more than 50 feet in length (15m) it was larger than the T-Rex. And it apparently spent a significant part of its time in the water, making it the only known semi-aquatic dinosaur (other massive creatures lived in the water but they are classified as marine reptiles rather than dinosaurs). Here’s an artist’s rendering. The report I saw from the BBC is at this location. 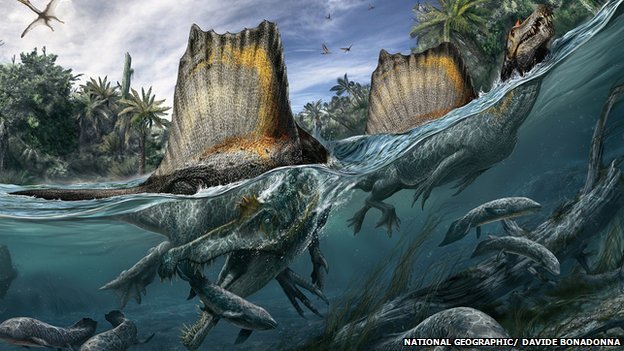 Alexis Karl, who lives in New York, describes herself as  a “painter of human animal hybrids, singer of dark ethereal ambient music, writer of urban fantasy and perfumer of unusual scents.” She made this skull, from a series entitled “Hybridas Morte”. It is metal (except it’s made from garnet, smoky quartz, onyx, and obsidian). (More info here.) 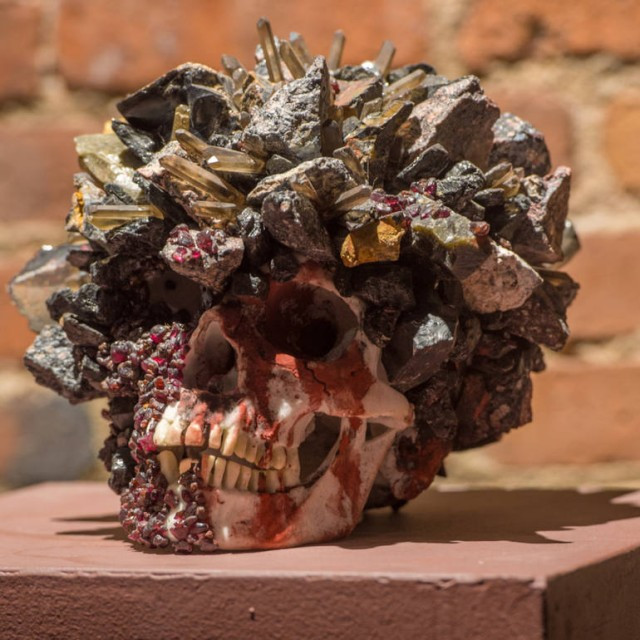 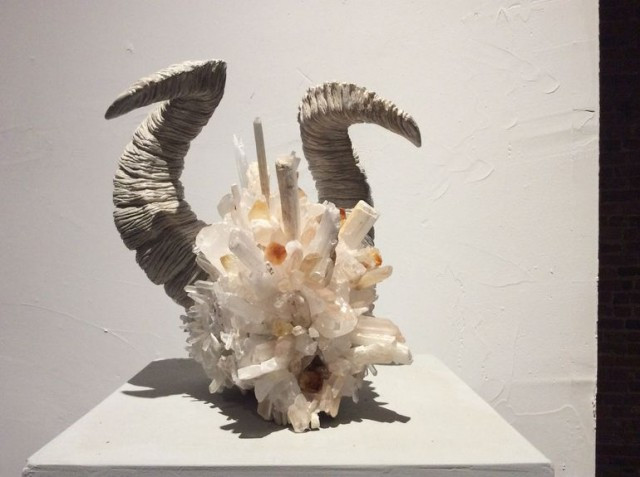 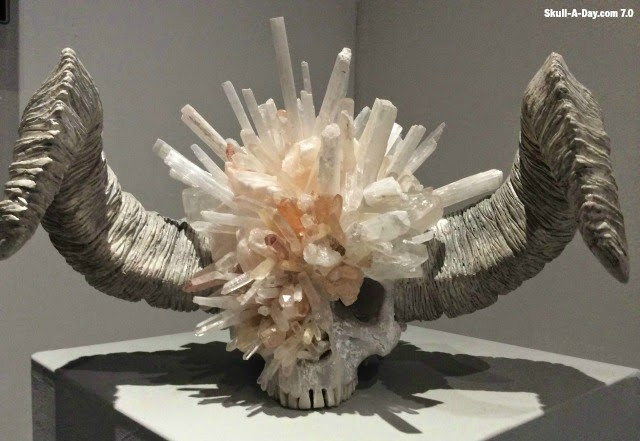 Well, skulls are on my mind now, so here are some more. These were carved and polished from geode crystals by a company called Skullis. They’re for sale here. 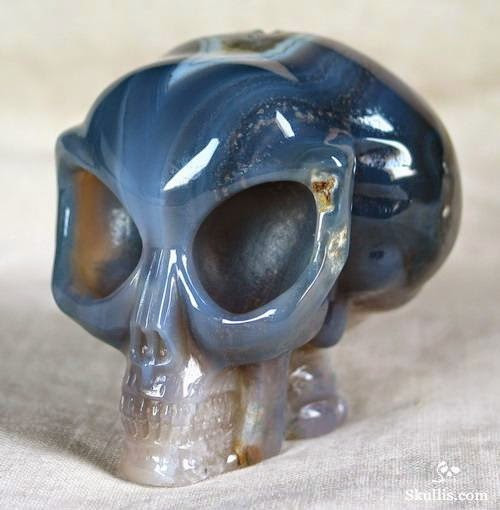 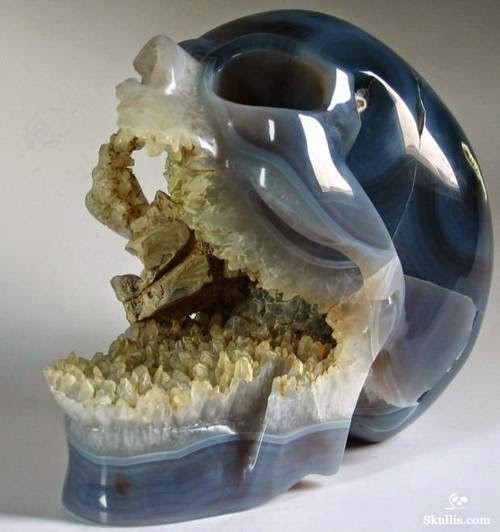 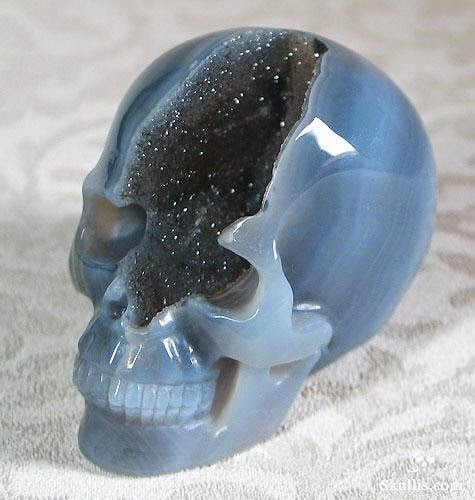 This next piece of washing machine carnage is metal on several levels. I mean, the subject of the video is literally made out of metal, and it’s also a completely unhinged and ridiculous idea. The damned thing almost seems alive as it shakes itself apart.

The dudes who made this explain: “Concrete counter weights were removed from outer drum unit, and a few other mods applied to keep it together long enough.”  Hail Whirlpool.

Fuck yeah, physics. It explains why front loaders shake themselves apart under certain conditions and it explains pendulum waves, too.

I’ve seen smaller versions of the pendulum wave before, but the one in this video uses 16 bowling balls, and it’s very cool. If you haven’t seen one of these demonstrations before, you’ll think at one point that everything has devolved into chaos, but keep watching.

To understand how to construct the pendulum apparatus and why it creates the imagery you see, check out this article.

To conclude this installment of THAT’S METAL!, I have two videos that involve bowed musical instruments — but not the kind of instruments you would usually associate with bowing, such as violins, violas, and cellos — and one that does involve a more conventional bowed instrument being played in an unusual setting.

In the second one, Sławomir Zubrzycki performs a piece by Carl Friedrich Abel in Poland on an instrument he built called the viola organista. Here’s a description of the instrument from The Age (where you can learn more about it):

Sixty-one gleaming steel strings run across it, similar to the inside of a baby grand. Each is connected to the keyboard, complete with smaller black keys for sharp and flat notes. But unlike a piano, it has no hammered dulcimers. Instead, there are four spinning wheels wrapped in horse-tail hair, like violin bows. To turn them, Zubrzycki pumps a pedal below the keyboard connected to a crankshaft. As he tinkles the keys, they press the strings down onto the wheels, emitting rich, sonorous tones reminiscent of a cello, an organ and even an accordion.

Leonardo Da Vinci made sketches of an instrument he called the viola organista, though he never built one, and others have suggested that Zubrzycki’s device more closely resembles one described as a “Geigenwerk/GeigenInstrument, oder GeigenClavicymbel” in the second volume of Michael Praetorius’s Syntagma Musicum from the 16th century. There’s a discussion of the instrument’s provenance at TYWKIWDBI. Whatever the original source of the invention, the sound it makes is wonderful.

And finally, the third video shows world-class violinist Roger Frisch playing the violin while undergoing brain surgery at the Mayo Clinic to correct a tremor in his hands. Apart from the what the fuck??? impact of doing this, the video explains the practical reason for it.

And that’s a wrap. As always, enjoy the rest of your fucking day.