I’m a couple of days late with this news, but it’s too exciting to overlook.

Almost exactly four years have passed since Sweden’s The Crown released their comeback album Doomsday King, which Andy Synn praised in one of his earliest posts for our site as “a masterpiece of wild fury and calculated aggression, blurring the lines between razor-sharp thrash and full-speed death metal.” The album made several of our 2010 year-end lists, and I included the song “Blood OD” on our list of the year’s Most Infectious Extreme Metal Songs. Needless to say, we’re very stoked about The Crown’s announcement that on January 15, 2015, they will be releasing their eighth album, Death Is Not Dead. Above, you can gaze upon the album’s cover art by Björn Gosses of Killustrations.

The announcement appeared on a new web site that the band have established, which also includes the news that on October 27 the band will be releasing (via Century Media) their first 7″ single, which will include one of the new songs — “Headhunter” — plus the band’s cover of “Unfit Earth” by Napalm Death. Pre-orders for that will begin on September 27. Here’s the cover art for the single, rendered by Giannis Nakos: 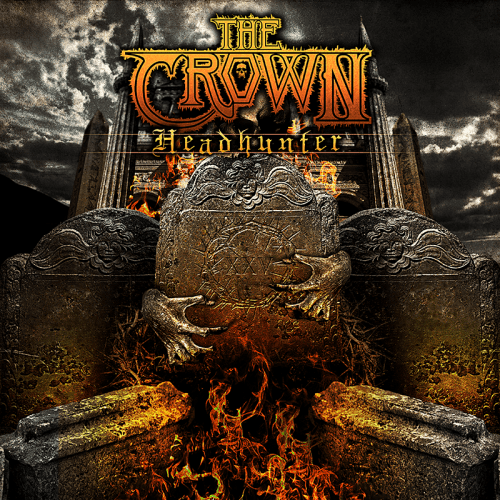 And finally, the band posted a short snippet of music from “Headhunter” — which sounds awfully enticing to these ears:

Here’s the link to The Crown’s new web site, and their Facebook page. Have no doubt that as more music becomes available, we will be writing about it.

5 Responses to “THE RETURN OF THE CROWN: “DEATH IS NOT DEAD””