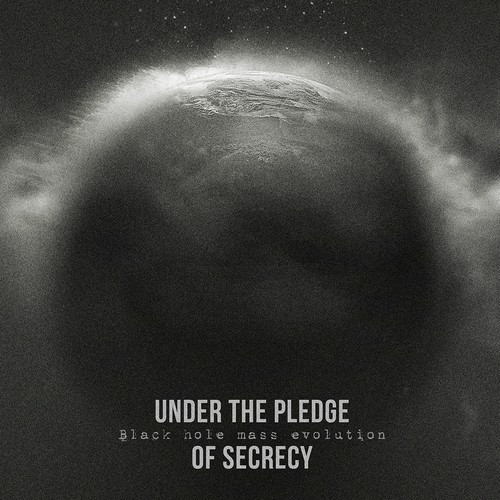 (Austin Weber provides the following introduction to our premiere of a song by Germany’s Under the Pledge of Secrecy.)

I was made aware of Under The Pledge Of Secrecy quite recently, and at just the right time it seems, as this talented German band have a new album, Black Hole Mass Evolution, coming very soon. I heard their last album, The Convoluted Line, described to me as sounding like Between The Buried And Me stripped down to their early primal aggressive style, and while I hear that, I would say they are also equal parts early Dillinger Escape Plan and early The Red Chord. Their Facebook and Soundcloud describes them as experimental grind metal, and those three intertwined certainly encompass the feel and flow of their music.

This is high-octane musical rabies, a convoluted yet precise wrecking ball of grind and death metal — shot through with a strong melodic counterbalance. Their music has always eclectically drawn from a wide swathe of sounds, though this new album embraces a greater death metal focus — a trait inherent in the rampaging track “The One Eyed God Prophecy” that we are premiering today.

The first few seconds bring the triumphant evil of Behemoth to mind, until the song ignites into a white-hot fury of thunderous roars, a conveyor-belt approach of frenzied riff after frenzied riff, bustling bouncy bass lines that exhibit a keen presence in the mix, and lightning-fast drumming interlocking with the guitars in pure rhythmic bliss. A multitude of grind bursts ratchet the intensity ever higher, feeding the frenzy and fire of the song’s scorching death metal primacy. After the pummeling, the track fades out into a section that sounds like a horror film score, an effective slip back into the abyss.

“The One Eyed God Prophecy” showcases a most unique form of death metal hybrid, and having heard the whole record, I can vouch for its varied and intricately juxtaposed compositions, which stand out with a vigor and frothing energy I can get behind. Black Hole Mass Evolution is coming; make sure your ears are ready and your order placed, this is not a record to pass over.

4 Responses to “AN NCS PREMIERE: UNDER THE PLEDGE OF SECRECY — “THE ONE EYED GOD PROPHECY””