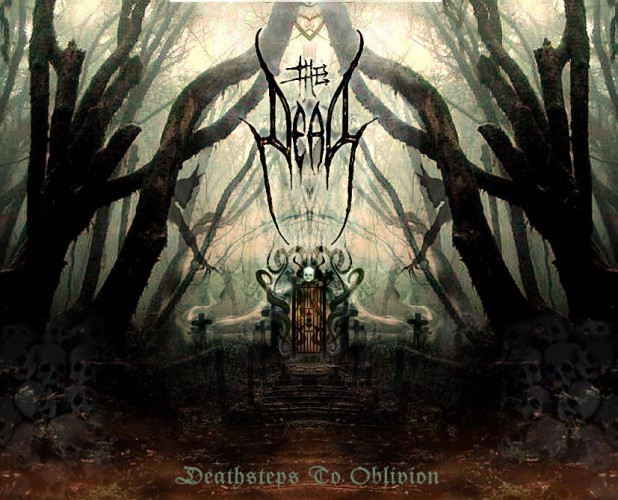 I originally intended to write about only one song from this album, as part of a collection of three striking songs from different bands that I heard back-to back a few days ago. I’m still going to do that — later today in fact — but after I made my way through the rest of this album I felt compelled to write about the album as a whole. Why?

Because Deathsteps To Oblivion is one of the most apocalyptically crushing albums I’ve heard all year, and also one of the most exotic — it really doesn’t sound like anything else I’ve heard. And for an album that’s terrifyingly bone-crushing, it’s also ridiculously addictive.

Deathsteps To Oblivion is the third album by a band from Brisbane, Australia named The Dead. It’s my first exposure to their music, so I’m not competent to compare this new one to what has come before. But if what preceded Deathsteps is in this same collapsed and cut-down vein, I want to hear it.

Part of what makes the album exotic is its unusual amalgamation of genre motifs. It’s as if some particularly antisocial musical alchemist succeeded in transmuting base elements of funeral doom, death metal, sludge, drone, Sergio Leone soundtracks, enough weed to put Sleep to sleep, and the vicious debates of a demon convocation, not into gold, but into a living, breathing leviathan serpent capable of hypnotizing its prey while its powerful coils squeeze the life out of them.

The music is almost entirely slow, built out of truly massive repeating riffs that are distorted to within an inch of their lives. The sludgy riffs hammer so powerfully that you can almost feel the ground beneath your feet splitting open to reveal bottomless chasms… and you are falling endlessly. The riffs aren’t flashy, but they’re damned ingenious, because they swallow you up in a way that makes you their prisoner long after the album ends.

The drum strikes are almost equally potent, and the cymbal crashes ring out vividly. The grinding bass rumble takes the massive tone of the music even deeper into the bowels of the earth, and when the bass player solos in “The Maze of Fire” and “Disturbing the Dead”, you can feel your guts begin to liquify.

The convocation of demons? That’s what the vocals sound like — a confluence of truly abyssal, abysmal death metal roars, bile-vomiting proclamations, terrifying demonic rasps and shrieks, and dreadful wailing yells.

The other aspect of the music that makes it exotic are the lead guitar parts. The sound of the guitar is positively eerie, with a squalling sound that resembles a distorted, reverberating harmonica (and you were wondering why I mentioned Sergio Leone). Maybe it’s a slide-guitar style of playing, maybe it’s something else — however the sound is achieved, it’s really fuckin’ cool.

The best songs on a very strong album from end-to-end are “”The God Beyond” and “Terminus”. The first of those songs is the only one on the record that storms — it begins with blasting drums and a hurricane-strength wall of guitar noise. But the storm breaks, and what comes after is the only part of the album that sounds like the survival of life instead of its utter destruction, with a warm repeating bass line and an extended guitar melody that seems like oxygen to a suffocating person.

“Terminus” is marked by a striking extended instrumental introduction, accented by the sound of tribal hand-drumming, and what comes after is both remorselessly brutal and completely transfixing.

Played at maximum volume, Deathsteps To Oblivion is cataclysmic, but as life-denying as the album is, there are songs on it that I’ll bet I never tire of hearing. Can you tell how much I like it?

Deathsteps to Oblivion is due for release on CD by Transcending Obscurity on about November 15 — but the album is available as a download on Bandcamp right now. Stream it below, if you’re smart.

6 Responses to “THE DEAD: “DEATHSTEPS TO OBLIVION””