As for the music, the band have recorded a three-song EP named Before The Devil Knows You’re Dead that will be released tomorrow. It will be available on Bandcamp, and shirts are already available at this location. The EP was mixed by Peter Tagtgren at Studio Abyss, with additional mixing by Eyal Levi at Audiohammer Studios. The EP’s cover art, which you cane see next, was created by Mark Riddick: 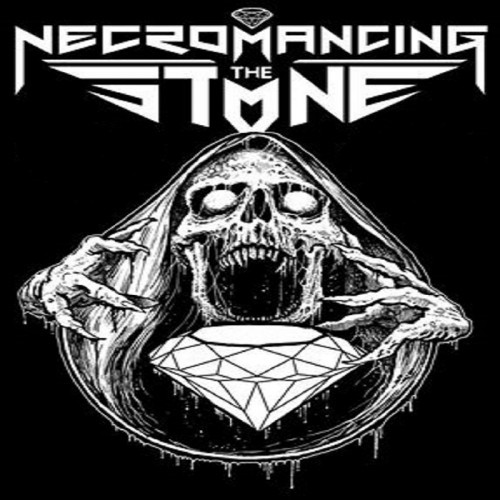 Here’s what the band have written about the EP on their Facebook page; you can draw your own conclusions about what the music will sound like:

Prepare thyselves, mortals of The Earth, for the end is truly nigh. You’ve seen the signs: deadly plagues, wars, famines, disasters both natural and man-made, and the continued popularity of monotonous deathcore have all foretold of the impending arrival of The Ultimate Threat, The Bringer of Doom, The Great Evil One Himself, Lord Breakdownicus Gratuitous.

Mankind has but one hope: Necromancing the Stone, the new no-nonsense traditionalist metal band that puts the “awe” in awesome. These five Titans of Metal have been living on our planet for centuries, most recently under the assumed aliases of James Malone (Arsis), Jeramie Kling (The Absence), Ryan “Bart” Williams (ex-The Black Dahlia Murder), and “Big John” Williams and Justin Wood (both of Brimstone Coven notoriety). The mission they have fulfilled for thousands of years: to protect the five fragments of The Earthen Stone, a mysterious and powerful object that is even more of the earth than all other stones (hence the name). But now, with the sinister powers of Lord Breakdownicus Gratuitous growing more gratuitously breakdowny every day, this quintet has united to save the human race, vowing to defeat the nefarious Lord Breakdownicus… with riffs.

Commented the bloated male corpse that has been passing for Kathleen Turner these past two decades, “This band rages like a nightclub fire!” Added her Romancing the Stone co-star Michael Douglas, “They rock so hard, they just might give you tongue cancer!”

I wondered when I saw the band’s name whether anyone below a certain age would get the reference to the Turner/Douglas movie.  I don’t know whether it has any connection to the music, but I enjoyed it — and it does make me think we’re in for some kind of retro rock or metal, especially with the presence of those Brimstone Coven dudes (whose music resembles a psychedelic, occult, Sabbathian kind of doom). I wouldn’t mind some fat riffs.

Well, we won’t have to wait long to find out.