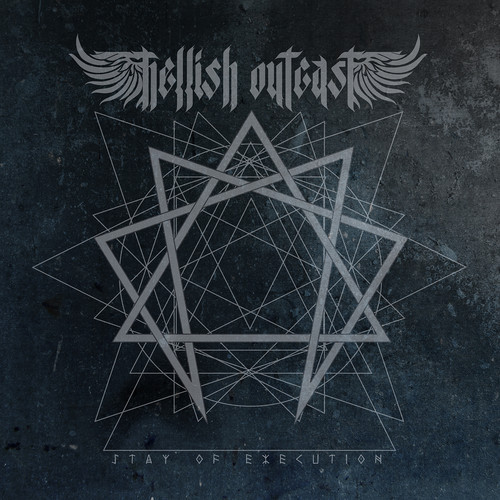 (In this post we present Andy Synn’s review of the forthcoming second album by Norway’s Hellish Outcast and an exclusive premiere of the song “Heresiarch.)

It’s always nice to see a band you love progress and move forward. Whether it’s in terms of getting proggier and weirder, or just downright heavier and nastier, it’s always such a joy to watch them grow up.

Case in point: It’s been two and a half years since Hellish Outcast unleashed their debut album of fist-clenching riffage and throat-bursting agony on the world, but it’s clear that they’ve not been idle in the intervening time.

No, they’ve been sharpening their knives, honing their skills, and biding their time. And now they’re ready for war once again.

Faster, heavier… fundamentally darker and more malevolent than ever, Stay of Execution improves on the band’s debut in pretty much every way, drastically ramping up the kill-count with a merciless display of calculated lethality and an undercurrent of sinister, progressive melody. 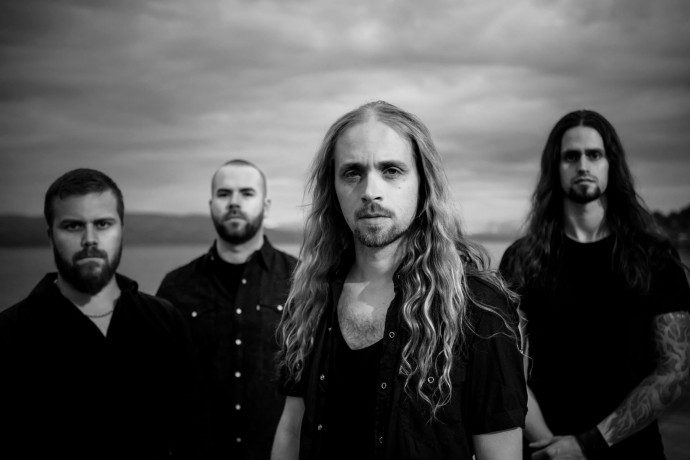 The megaton ultra-thrash of “Partition of Lust” kicks things off in unforgiving style with its potent mix of cybernetic Slayer-isms and outright Death Metal lunacy, its utterly visceral riffs backed by some impressively slippery bass work and some truly ballistic drumming, before the wrenching blast-and-burn of “I Can No Longer See The Sun” switches things up, introducing the darker, more progressive, and more bleakly melodic side of the band’s sound alongside the song’s hammer-blow riffage and throat-rending aggression.

The pounding pneumatic crush that introduces “Heresiarch” definitely has some kaiju DNA to it, stomping and brutalising with monstrous force, before the band drop into a mammoth chug-a-thon of raw, metallic power. This almost relentless punishment is accented with a truly ominous, eerily melodic chorus which only serves to intensify the breaking weight brought to bear by Martin Legreid’s iron-clad riff-work and Mads Lilletvedt’s multi-limbed, cybernetic drumming.

A desolate, progressively inclined finale of creeping acoustic guitar notes and hauntingly atmospheric melodies brings the song to an unexpectedly poetic close, before the dense, cluster-bomb blast-work and blitzkrieg thrash-attack of “Hunter Supreme” erupts into activity, its volcanic drums matching the manic gallop and muscular groove of the guitars pound-for-pound and blow-for-blow.

Thebon’s beast-like, multi-faceted vocals get a real workout during the brutalising, Cannibal Corpse-esque assault of “Gods of Fear”, while the rest of the band whip themselves into a maddening Death Metal frenzy of crushing bass lines and jagged, flesh-rending riffs. This is cleverly juxtaposed against the suicidal introspection and morbid melody of “Leave” whose undulating low tones and strained, hypnotic harmonies provide a perfectly positioned contrast of style and mood.

The jagged rhythms and bone-scraping riffs of “Machines” slowly transform into a slow, chugging crawl of grim, oozing misanthropy, grinding down towards oblivion, before exploding outwards once more in a coronal ejection of pure, molten rage, topped off with a radioactive dose of raw, shredding guitar work — which leads into the tortured death-rattle of the title track, where Thebon’s wounded vocals take centre-stage in the eye of a suffocating storm of scorched-earth riffage.

Utterly voracious, menacingly melodic, and stunningly, almost psychotically, aggressive, this is a true purpose-built predator of an album. An absolute monster of mutant metallic mayhem.

Without a doubt one of the best and most compelling albums I’ve heard this year.

Stay of Execution will be released by is Listenable Records on October 20, 2014, and can be pre-ordered here. Listen to “Heresiarch” below.

3 Responses to “AN NCS PREMIERE: HELLISH OUTCAST — “HERESIARCH” (AND A REVIEW OF “STAY OF EXECUTION”)”