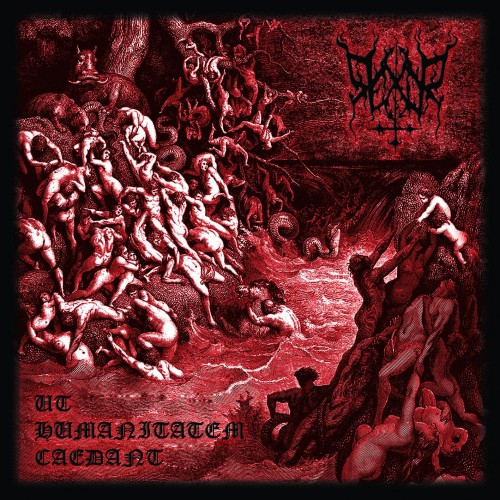 I suppose if I were a responsible person I would tell you to proceed with caution, like a traffic sign on a highway to hell that’s about to drop precipitously into a lake of blood. But instead, my advice is to take your seatbelt off and floor it — that’s the best way to experience the new song we’re premiering from Italy’s Rexor today, because that’s the way they drive, too.

Rexor’s debut album, Ain, appeared in 2008, and their most recent release was a 2012 EP named Nox Obscura Sortis. Their new album is entitled Ut Humanitatem Caedant, and its advent is nearly upon us. As a sign of what awaits within, we bring you “Demigorgon”. It begins with a prelude that’s heavy with an air of infernal majesty — and then it explodes. There’s really no other word for it.

The drumwork is off the hook, a frenzied, hyperspeed display of almost inhuman dexterity and vehemence. The riffs are like a hail of razors. The vocals are pure acid spray. But as this dynamic song progresses and begins to slow into a wounded stagger, the bass almost becomes the dominant instrument (at the very least it seized my attention). Harnessed together, all of these elements of the music deliver an experience that’s energizing, malignant, ominous, and draped in a melodic atmosphere of unavoidable doom. It’s black metal that’s ravaging and powerful.

Ut Humanitatem Caedant is being released by a triumvirate of labels, on the following dates:

You can find Rexor on Facebook here. And now that you’ve been warned (and instructed), listen to “Demigorgon”: