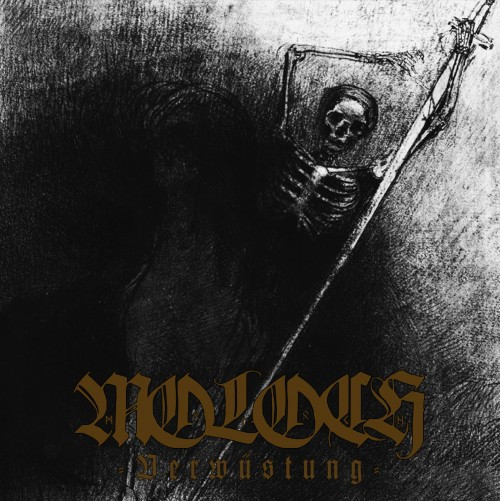 Moloch is an incredibly prolific one-man Ukrainian band, the alter-ego of multi-instrumentalist and vocalist Sergiy Fjordsson. Since 2004 (according to Metal-Archives) Moloch has released more than 90 demos, splits, EPs, compilations, and full-length albums, and the grand total is undoubtedly higher if we include recordings that were circulated only among small groups of friends and colleagues. In 2014 alone, Moloch has participated in splits with Sabbat, Krieg, and Nunslaughter, released two EPs (Horizont and Die Isolation), and produced an album named Verwüstung. Yet despite this breathtakingly large output, the only work with which I’m familiar — and only recently so — is Verwüstung. But it made an impact on me, hence this review.

As a Moloch neophyte, I’m unable to compare and contrast Verwüstung with any of Moloch’s other releases. For me, it stands alone, but it stands tall.

The album includes two types of music, reflecting what I gather are Fjordsson’s two divergent musical passions. The first track (“Todesstille”) and the last one (“Verwüstung”) are wordless dark ambient pieces. They are markedly different from the six songs that come between them, but they don’t feel tacked on. They feel more like steps in a ritual, with “Todesstille” clearing the mind in preparation for what is to come and “Verwüstung” providing a cooling-off period and a time of reflection after the emotionally harrowing storm of black metal that precedes it.

“Todesstille” (silent death) is hypnotic and meditative, with a foundation of low, droning, vibrating tones and high-pitched, ephemeral waves that pulsate and shimmer. The song is so entrancing that when “Blutmond” erupts, it comes as a shock. Like all the songs between the afore-mentioned bookends, it’s built out of riveting riffs and attention-grabbing drumwork. It’s full of blood spray and blizzard ice, and it provides the first taste of Moloch’s utterly wrenching vocal style.

And I do mean wrenching — his anguished, agonized howls and yells sound like the voice of a riven soul, split open and laid bare, holding nothing back. At the peaks of these emotional outpourings, he sounds like a lone wolf baying over the slaughter of his pack. That voice is a dominant aspect of the music on this album, and an integral part of what makes it so intense. I’m guessing that most listeners will either be caught up in his passion or want to seek refuge from it; I’m in the former camp.

The emotional intensity of the music is of a particular kind: The music is atmospherically cold and bleak. Both when Moloch is storming away in powerful assaults such as “Negativitat” (Negativity) and “Die Kalte der Ewigkelt” (The Cold of Eternity) and when dropping into doom-stricken processional dirges, as in “Nur de Tod its wirklich” (Only Death Is Real), the music is saturated with a sense of desolation verging on despair. Yet the mainly tremolo-picked riffs are so sharply crafted and the drumming is so varied and potent that the songs are gripping as well as frigid. And there are moments of genuine beauty; the guitar melody that eventually surfaces in “Spiritueller Selbtsmord” (Spiritual Suicide) is strikingly sad, but… striking.

And there are surprises in store, too. Just before the long closing ambient piece, Moloch delivers “Du bist nichts in dieser sterbenden Welt” (You Are Nothing In This Dying World), which begins with a long, slow, solo bass arpeggio and then transitions into something very close to the treble-shifted, lo-fi black metal of decades ago. Perhaps needless to say, it’s thoroughly depressing.

The cumulative effect of these songs is both electrifying and exhausting. It’s almost a relief when “Verwüstung” arrives. It’s more than 11 minutes of ambient music, with long drifting spaces periodically enlivened by echoing keyboard notes and swelling moments of melody. “Otherworldly” is the word for it. I was happy to float on its tides for the entire duration.

For many other very good bands, this is the kind of album I’d expect to surface after a year or two of hard work following the last release. I’m kind of dumbfounded that something this good is just one more surge in what seems to be a ceaseless flood of creativity from this band. It would take much more time than I have to explore Moloch’s burgeoning back catalogue, or even to listen to everything else the band has released this year, but I’ll tell you what: I’ll be watching for whatever comes next.

Verwüstung is available on Bandcamp as a digital download and in a wide variety of physical formats. The digital version on Bandcamp includes two “hidden” tracks not available on the album as I heard it — “Frédéric François Chopin symphony” and a previously unreleased demo track, “Nur de Tod ist wirklich”. The album stream follows these links:

One Response to “MOLOCH: “VERWÜSTUNG””