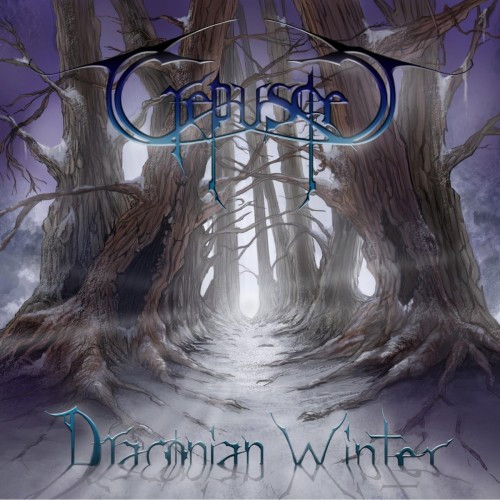 There are styles of heavy metal that I think, through no lack of trying on America’s part, are always going to be distinctly European. Folk metal and its various offshoots, alongside the hybrid genres of pagan melo-death (I’m still not sure that means anything but have seen numerous tours under that banner) and the sort of symphonic battle hymns that the combinations of the aforementioned genres, are all styles of music that European bands, and particularly the usual Scandinavian suspects, seem to have on lock down.

There have been some valiant attempts in the U.S., of course, as firing a shotgun into a wall is bound to hit something, and there have been a ton of bands over the years who have been inspired by groups such as Wintersun, Ensiferum, the viking metal explosion (itself a thorny briar patch of bands not easily defined), and their folksier brethren — but those bands have usually suffered from one of two problems: an inability to find a crowd here in the States and therefore no staying power, or a tendency to display a light shade of mimicry.

It has usually been all too clear that the musicians in these bands were massive fans of their influences, but they were never able to get out of their shadow creatively, leaving them feeling like the B-team to a better product that sadly, rarely seems to tour over here.

It seems, however, that in the past few years bands have finally gotten a grip on that massive torrent of keyboard swells and melodies and really begun to stand shoulder-to-shoulder with their influences — and I’ll be damned if it doesn’t seem like they are coming out of some of the more off-the-wall places.

For instance, if you had played me the music of the band Aether Realm without giving me any prior knowledge of where they were from, I immediately would’ve guessed they hailed from Finland. Such is the demonstration of how close bands from the US are now moving to their influences — especially as it seems that the whole scene is quieting down over there, save for the usual staple of three or four long-standing groups.

Which brings me to Redwood City, California’s own Crepuscle, a band whose name doesn’t really conjure up the style of music that the band kicks out, but a minute into their second song after the intro track, aptly titled “A Call To Arms”, and you know exactly what you’re in for. I feel like, once again, I have found another one of those bands whose influences are very clear from the get-go, yet who manage to surpass the “influenced by” label to actually make a stand within the genre.

There is a case to be made for knowing exactly what you’re in for before you cross the threshold of listening to a new album. I’ll fully admit that I’ve come to view certain standards of the metal genre as my “comfort food”. It’s music that I know well and I don’t need it to be wholly innovative or new every step of the way, so long as the band performs well within the boundaries they have set out for them.

I don’t need my melodic death metal to be the next big wave of music, but I do love when a band manages to eke out some amazing riff work or figure out how to pull off the Gothenburg two-step drumming with reckless abandon. If done well, you hardly notice that, yes, it’s clear a band exists within a certain sphere of influence and aren’t exactly pushing boundaries. I have found that Crepuscle’s newest album, 2014’s Draconian Winter, is one of those albums.

As mentioned, Crepuscle hail from Redwood City, California, a city where the only bit of trivia I can remember is that the videogame publisher Electronic Arts has its headquarters out there, Other than that, it’s one of the many nondescript tech-friendly port cities that run from San Francisco down to San Jose. As I suggested before, it’s not one of the places where I would’ve expected to find this sound done as well as Crepuscle do it.

The group have been active for some time, having existed in various forms under the previous name Draconian Winter before finally activating as Crepuscle and getting their first release out under that name as of 2013. The songs from that specific demo have all found their way onto Draconian Winter,  bunched alongside six other tracks, making the album a ten-song symphonic melo-death journey through snow-covered and cold-forested battlefields alike, all under a banner of orchestral strings, galloping drums, and lead guitar fretwork designed to get the melodies stuck in your head before you wrap with this disc.

Draconian Winter is one of those albums that impresses partially because it does come from such an unknown place. It has become more common these days, but it seems that bands who would be relegated to local stature are absolutely killing it when it comes to first releases. Crepuscle have done so on Draconian Winter, managing to pin down the sound they were aiming for with a ruthless efficiency. While we may be known in the States more for a focus on unrelenting brutality, Crepuscle have a deft touch to their music, conjuring up those frost-covered battlefields, war-torn banners, and weary men that their genre is known for.

Crepuscle have two live backing vocalists in keyboardist Aaron Robitsch and bassist Gavin De Vaughn, but on the album guitarist Eligio Tapia provides backing vocals in the high range while his lead vocals tend to bounce between a bellowing low and a mid-ranged roar. Combined together, all three styles ride atop a cresting wave of driving guitar sections and dancing, baroque keyboard playing.

Crepuscle are apt to drop a pretty heavy death metal section in the centers of their songs and do so with huge walls of guitars in front of them, leading to tremendous blast sections that sound like actual battles taking place, tearing their way through songs as opposed to the battle hymns and calls beforehand. The group have mastered a galloping drum section like few others have and it loans itself real well to constant headbanging, with many of the guitar parts seemingly written to encourage whiplash as much as possible.

Crepuscle also have the genre’s knack for a really good lead melody, and on Draconian Winter they rotate it between the guitars and keys at the drop of a dime. Often the guitar lead is a series of long, sustained notes that could be easily vocalized in a large crowd and they sweep over songs with a majestic grandeur. They even get their own time to shine in a brief acoustic interlude a little over halfway through “Draconian Winter”, before the next song marches all over it. Such is the life of a peaceful subject in the midst of war, it seems.

Although it has taken us some time to get around to talking about it, Draconian Winter is a pleasant surprise coming from way out of a left field. The band have studied their influences to a ‘T’ and then on this release have managed to edge super-close to standing shoulder to shoulder with them. There’s no sense of mimicry here because Crepuscle are authentic students of that huge, keyboard-heavy, war-singed sound and even manage to edge a little bit into Hypocrisy’s field of sounding ten times huger than they actually are.

With a super-strong full-length debut under their cap, Crepuscle have made a strong case that they are worth being heard. Now, of course, the fun part begins as the five guys who make up the band have to fight tooth and nail to get themselves out there. It certainly helps that Crepuscle have started by making as good a case as anyone could for such a first effort, having absolutely nailed their sound down and coming off as professional as bands who have been making a career out of this style of music.

Not only is Draconian Winter a damn fine debut, but it shows a huge amount of potential here for a just starting out/relaunched project. This disc is a good point to jump onto this band’s train, because you don’t have to wait for the group to prove themselves — they already have. Now we just get to sit back and enjoy as they get better and better at it.

One Response to “CREPUSCLE: “DRACONIAN WINTER””