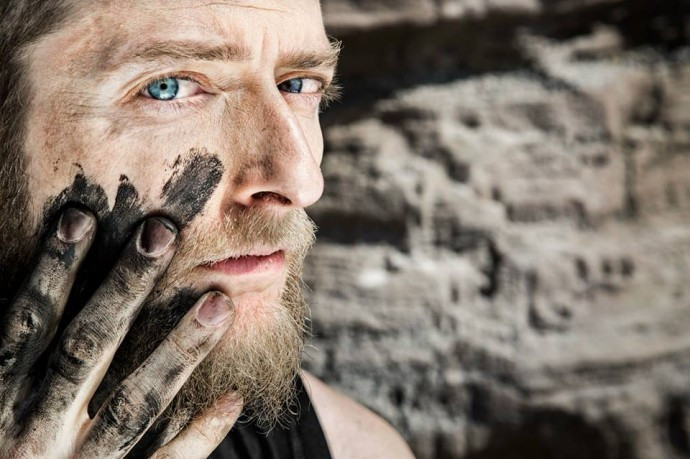 (Our interviewer KevinP, a notoriously hard man to please, somehow convinced Enricho Schettino, guitarist for Italy’s Hideous Divinity, to speak with him. This is what followed.)

K:  The band was formed in 2007 when you left Hour of Penance and moved to Norway.  What caused you to move and would you have stayed in Hour of Penance if you hadn’t moved?

E:  I thought I was gonna drop death metal as soon as I’d start a new life in a foreign country… god I was wrong. About my moving reasons… a Norwegian friend of mine once told me that people move there either for love or to escape from a war conflict.  In my case it was the first one. Have no clue about how things would have been in the band if I stayed, I just remember that at the time for me it was really difficult to stand the company of many Hour of Penance members.

E:  Yes. Got the proposal to re-join and I was extremely happy to play live again with them. I was not involved at all in their new album’s songwriting process but I thought it was fair.  I took it all extremely easy. Then we played in an Italian festival, apparently the sound was messy and I took all the blame. Asked if there was any problem, but everyone said “No no we’re fine 100%”… One week later, just before a fest in Switzerland, I got the call — with no face-to-face explanation to this date — saying, “We’re better off as 4 piece”. These are the facts, just want to stick to them, or at least I wanna try.

K:  So besides this incident in 2009, what was going on with Hideous Divinity between 2007-2012 before the release of your debut album?

E:  Very little until middle of 2010 (moved back to Italy in 2009), when I finally got a real lineup for Hideous Divinity and a couple of new songs besides the Promo I made in 2007.  We recorded a new promo end of that year that got us the deal with Unique Leader. A couple of dates, some of them awesome, like the Inferno Festival in April 2011, and then we recorded Obeisance Rising that summer. After endless delays, the record was out in Spring 2012, and the response to it was enthusiastic almost everywhere.

K:  So for anyone new to Hideous Divinity, naturally they are going to be reminded of your past band.  But what would you say is different this time around from your prior band AND your debut album?

E:  We try not to ripoff Behemoth. Ha.

Hour of Penance started as something different, during the time when to be “fast” was more than enough. They’ve reached success and now they’re maintaining it.  Hideous Divinity was “officially” born in 2010, good death metal bands were everywhere, and we had to fight harder to get recognition.  It was not only about speed, but also and mostly about songs. SONGS. Do people remember what a death metal song is?

K:  I’ll play along.  Refresh my memory for me.

K:  I find NILE to be boring as sin, but anything IMMOLATION does is solid gold.

E:  Boring as sin, haha, love the expression. Well, can’t talk objectively about them, they were mother’s milk. Immolation, well, can’t say anything about them other than “gods”. Erasing all those 300 BPM insignificant bands with a single guitar riff. That’s Immo.

K:   I guess to clue people in, I’d say you play blasting technical bludgeoning death metal.  You have any problem with that?

E:  I still don’t get it when people labels us “technical”. What is technical? Don’t you think this word is being abused? What makes us technical? Is it for the use of weird tempos or twisted riffs? Need your help here.

K:  Usually when a band throws a slew of “notes” at ya it gets branded as technical.  But too many times tech-death is pointless wankery. So I personally make a distinction between tech-death (Necrophagist) and technical death metal (Atheist, Suffocation, Obscura, etc,).  Hopefully that makes some sort of sense.

E:  It definitively does to me. Bravo. Not saying that bands such as Fallujah have no talent, they’re amazing musicians, but I miss their point. And many of them end up being copycats of copycats. The last revolution in that kind of technical genre to me was Origin: technical skills at the service of brutality. Result: songs like “Expulsion of Fury”… pure genius.

K:  Normally I don’t like really care for other bands of your ilk.  I find almost all of them to be silly sounding or trying too hard and it just comes across as pointless drivel.  Yet I like Hideous Divinity, there’s something about your sound that I like but  can’t really quantify.  What do you think it is?

E:  The only explanation I could give to you is: we care about the song. We care about its structure and hooks and mood. A HD song is not considered “written” if that hook that comes after a short while is still missing. Some of these hooks just happen (when you’re extremely lucky), some other are achieved after a massive work of writing-erasing-rewriting. This is 2014, almost 2015, and to write a death metal SONG is no picnic. 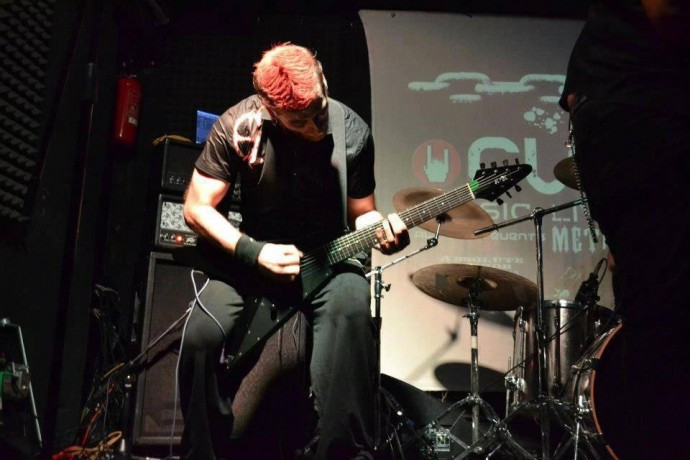 K:  Ok, let’s get back to your debut album, Obeisance Rising.  It was a concept album based on John Carpenter’s THEY LIVE.  What made you choose this movie?

E:  My love for John Carpenter plus the movie’s topic being so unbelievably hot even after 25 years. It seems that very few things changed since the Reagan era: we just move from cathode ray tube to touchscreen.

K:  Using THEY LIVE as a concept is what put the band on the radar for me, since it’s such a classic movie that is terribly underrated.  I mean, come on, ANYTHING with Keith David is awesome.

E:  Ahaha, he’s the man. The fight scene is legendary, but there’s so much more in that movie…

K:  Agreed.  Now I’ve come here to chew bubblegum and talk death metal. And I’m all out of bubblegum……Your new album, Cobra Verde.  Another concept album from a movie.  Tell us about it.

E:  I knew I wanted to repeat the movie concept, I just had to choose a strong story. Not an obvious movie, something not so mainstream yet epic, something that, quoting Garcia Marquez, could make you feel that “legendary breath”.

Herzog’s cinema always intrigued me. He’s an epic storyteller, a singer of ancient tribes and forgotten languages. It doesn’t get closer to my personal idea of “death metal” than this. Cobra Verde is a tale of solitude, violence, alienation, with a tribal dark rhythm that has no beginning and end.

So you have moments of insane violence (“Sinister and Demented”), dark reflection (the title track), epic anthems with battle beat (“The Somber Empire”)… everything in the album relates to certain passages of the script. That’s what a concept album (a definition highly abused nowadays in music) should always do.

K:  So you chose to do a cover of a Ripping Corpse song from their unreleased industry demo, “The Last & Only Son”.  Does that tie into the Cobra Verde concept at all?  Cause frankly I’d say “Morbid Fascination” and “The Hate Eternal” are superior songs.

E:  Dunno why I chose “Last & Only Son”. Maybe because I perceived we had more “room” to do some modern death metal changes without distorting the original song. Anyway, we loved the result, and, most important, Shaune Kelley did too. He was so surprised with our choice, he even had his difficulties finding the lyrics to that song…

K:   I agree with you on the quality of the cover.  I normally don’t care for cover songs as I rather just hear the original or it never does it justice.

E:  My favorite cover is “Media Blitz” written by The Germs and performed by Brutal Truth on their Need To Control album. 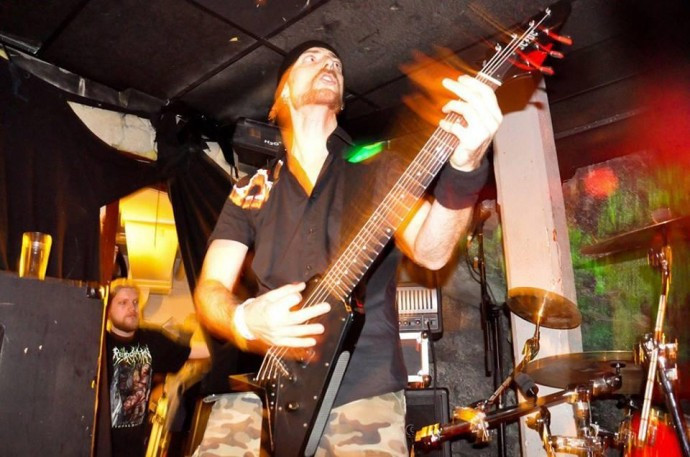 K:  Here’s one of those typical interview questions:  What live appearances you have coming coming up?

E:  One week from now we’ll be at the Ludwigshafen Deathfest, and first weekend of November we’ll be at Aalborg Metalfest. There’s something planned already for 2015 but we better wait until final confirmation. Plus, I’d like to give Cobra Verde the proper time to spread around.

K:  Any chance you’ll be playing in the USA next year?

E:  Being brutally honest, the fact that US airports and customs have become more strict about foreign musicians traveling without working visas, is a huge pain in the neck. Expenses will end up being too high for a band like us.  Besides, I find the US tour difficult for bands not into the US brutal death sub genre.

K:  I can’t disagree with you  on any of that.  My only suggestion would be look into Maryland Deathfest and 70,000 Tons of Metal.

K:  I was hoping to get your comparison between New York Italian food and real Italian food, but I guess you’ve not been to New York.

E:  I believe right now Italian food has become so globalized that maybe the best dish of pasta carbonara of my whole life awaits for me somewhere between NY and NJ… who knows? It’s funny how American food sometimes has no way in between extreme junk food and 110% ultra bio-vegan stuff. But that’s another aspect of American society that really intrigues me. You live in a country of madmen, but I guess you know that already.

K:  Thanks for your time, and since I live right near Disney (and consider it my second home) you’re welcome to come down and I’ll give you the grand tour of the parks anytime.

E:  That’d be awesome. Thank for you the nice conversation.

Cobra Verde will be released by Unique Leader on October 28 in the U.S. (Oct 27 in the UK and Oct 31 in Europe). Pre-orders can be placed here. Below you will find one of the new songs to stream.