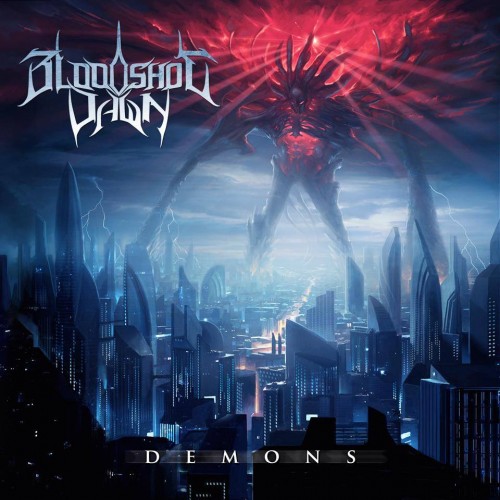 You see that guy up there straddling that futuristic city like a colossus, preparing to unleash arcane energies upon its helpless inhabitants? If you want to know what’s going through his head, the answer is a vision of a Bloodshot Dawn and the music on a new album named Demons. The first advance song from the album (“Smoke and Mirrors”) premiered earlier this month, and now a second one is out.

This new one is named ‘The Image Faded”, and holy hell, it features solos from Chris Amott, Per Nilsson, Andy James, and Teemu Mäntysaari, as well as the band’s own hot shit guitar duo of Josh McMorran and Ben Ellis. I don’t think guitars get erections, but if they did, the song would need one of those warnings about seeing a doctor if it lasts for more than four hours.

TheMadIsraeli already reviewed Demons for us here. I’ll just quote what he had to say about this song, since he called it:

Demons will be released on October 26. The album and related merch can be pre-ordered here. The new song stream is below.