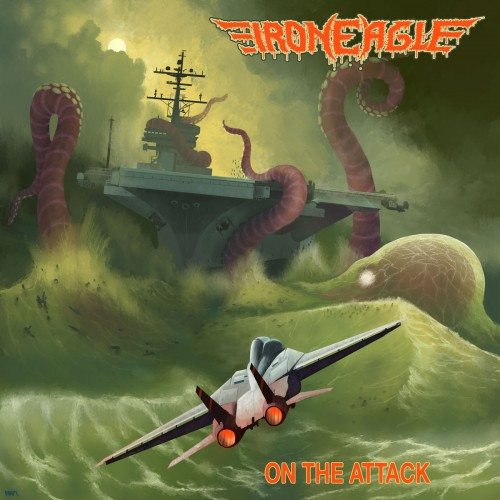 When a band’s first three listed influences on their Facebook page are Bolt Thrower, Discharge, and Bad Brains, that’s a good sign. When their line-up seems to include current members of Human Cull and a former member of the UK powerviolence band Witch Cult, that’s another good sign. When their album art depicts a giant fuckin’ octopus about to pull an aircraft carrier into the depths and starts with a sample about Godzilla — sold. And I haven’t even gotten to the music yet.

The band’s name is Iron Eagle and their debut EP is On the Attack, and is that ever a true title.

That Godzilla sample takes up the first few seconds of “Winta of Discuntent” and then the hammer comes down with a completely unstoppable, completely primal chug onslaught. And it goes from there to a crusty hardcore kerb stomp and back again. And that’s basically what happens over the course of all five songs.

The music swerves mainly between a massive attack of mid-paced death metal sledgehammer riffs and “let’s see how fast we can kick this place into smithereens” hardcore mosh fuel, with a raw, braying, larynx-shredding vocalist vomiting out unhinged vituperation over the top of the fuzzed-out mayhem.

When you get to “Why Complain?” and “Get Sick or Die Trying”, you realize these dudes can dish up gory, crawling, cadaver-strewn death/doom, too. Of course, they also spice up even those songs up with some accelerated violence to go along with the bone-carving chainsaw riffage.

On the Attack is one shaggy, heavy, brawling beast and one of the fall’s best surprises. The cover art is by Luke Oram. The album is available as a “pay what you want” download on Bandcamp. Stream it below.