Anicon’s ranks include members of Trenchgrinder (vocalist/guitarist Owen Rundquist) and Krallice (drummer Lev Weinstein), as well as guitarist/vocalist Nolan Voss and bass player Alexander DeMaria (ex-Alrunes). They have two long songs on the vinyl split, “A Crown On Every Head” and “Blood and Stone”, and a third song (“Current of Ash and White”) comes as a bonus on the digital download.

Perhaps what stands out first about Anicon’s songs is the tremendous technical skill of the musicians, especially when the music is blazing in the red zone, which is much of the time. I expected no less of Lev Weinstein, having seen and heard him before in other bands — his drumming reaches jaw-dropping levels of speed and dexterity — but the guitarists and the bass player also put on a real show.

This is black metal that’s often ripping and ravaging, but the music is intricate at the same time. Even when the pace drops into a slow rocking rhythm or a lurching procession, there’s a lot of instrumental flash on display, especially in the searing tremolo-picked leads and solos.

In addition to the music’s complexity, Anicon stands out because they succeed in lacing the often warlike assaults with interesting melodies. “A Crown on Every Head” is heavy, dark, and discordant, while the atmosphere of “Blood and Stone” is best described as “epic”, both scathing and heart-swelling. In its union of satanic shrieks, instrumental complexity, and dramatic, pulse-pounding melody, it put me in mind of Emperor in that nightside eclipse.

In a nutshell, Anicon are a great new discovery and a band worth watching closely in the future.

While on the subject of Anicon, they will be touring with another outstanding NY black metal band, Yellow Eyes, beginning later this month, and I’ve included those dates below, just after the music stream. 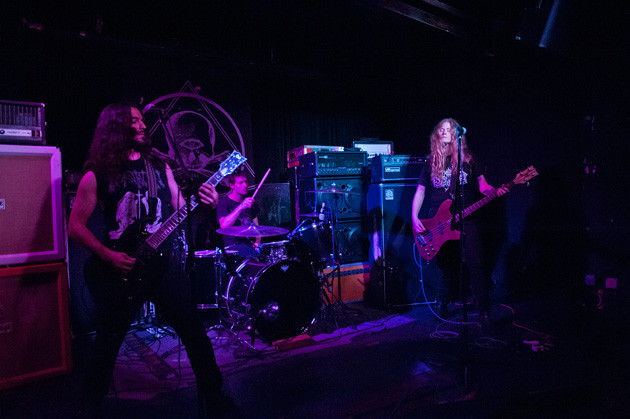 Belus initially interested me because their bass player and one of the vocalists is Lesley Wolf of the band Mortals, whose debut album Cursed To See the Future is one of my favorite 2014 releases (I’ve written about Mortals more than a few times this year). Their two songs are the nearly 11-minute “Amidst Decay” and a somewhat shorter track named “Venomous”.

Belus make good use of those 11 minutes on “Amidst Decay”, dynamically blending together elements of doom and black metal into a cohesive whole that’s really excellent. Slow, reverberating guitar and bass notes begin the song, evolving into a morose, heavy melody, with ringing, fuzzed-out guitars — and then the music explodes in a fury of blast-beats and raking chords with caustic blackened howls.

The pacing moves back and forth, a mix of slow, dismal, distortion-shrouded chords that cast a thick pall of gloom; morbid, slithering riffs accompanied by bursts of percussive artillery ; and furious tremolo’d assaults. In addition to blasting away in the ripping sections and booming solemnly during the doom-crawls, the drummer turns in displays of somersaulting acrobatics that are wondrous.

The pall of doom is almost completely cast aside in the high-intensity romp of “Venomous”, which begins with a punkish rhythm and fuzzy, rocking chords before transitioning into a storm of raking riffs, needling guitar melody, and nimble bass rumbles. The music is laced with dissonant melody over a grinding low end, topped with boiling-in-oil vocal extremity and propelled by yet another vibrant drum performance. The song briefly sinks into a pit of despondency before a bang-up finish highlighted by a rippling tremolo melody.

Like Anicon, Belus prove with these two songs that they belong on your radar screen, delivering a union of black metal and doom that’s creative and galvanizing. It will be fun to see what they come up with next.

2 Responses to “SHORT BUT SWEET: ANICON AND BELUS (A SPLIT)”