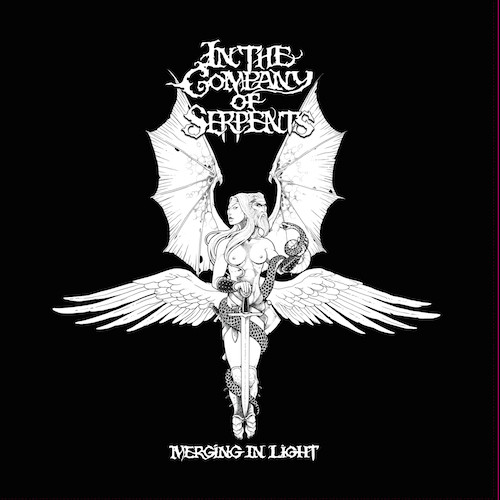 After two albums in 2012 and 2103, Denver’s In the Company of Serpents have blessed this year with a new EP, set for release on the winter solstice, the longest night of the year in the northern hemisphere. It’s stupefyingly heavy and viciously catchy, and although its title is Merging Into Light, the merger seems to be happening in the last brief instant before the glimmer is extinguished and everything goes dark.

The music is tank-like in the roll of its mechanics, the guitar and bass chords so distorted and sludgy that it seems like an experiment in the most efficient means of sonic spinal compression, the drum strikes so powerful that they come down like a pile-driver on concrete. The effect is near-cataclysmic. But oh man, the groove is so dominant — these are neck-grabbing songs that will bend your head up and down to their will. 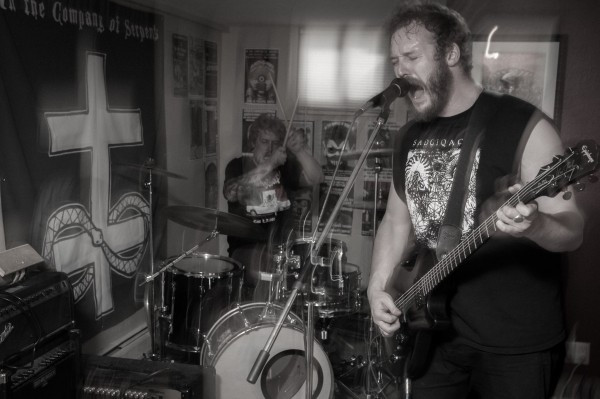 The three songs are serious demolition jobs, intent on leaving nothing standing but mounds of rubble. With raw howls that emanate from a throat filled with gravel and blood and a narcotic haze in the gloomy melodies, there’s a strong whiff of stoner in the doom, but with a more pulverizing effect than many who ply that trade accomplish.

All three songs are compelling, but the final track “A Union of Opposites” is the most eye-opening and disturbing. It interweaves huge tribal drum beats, eerie cosmic ambience, and a diseased lead guitar line that slithers through the massive chords like a python, or like the malignant flow of poison in the bloodstream, eager to reach the brain. With two minutes left, the pace slows to a stagger, with the beat of a failing heart on its last legs.

Merging In Light will be released on December 21 via the group’s Bandcamp page in a limited edition of 100 vinyl copies, plus a digital download. Thanks to a premiere by CVLT Nation, you can check out the EP’s final track below.

6 Responses to “SHORT BUT SWEET: IN THE COMPANY OF SERPENTS — “MERGING IN LIGHT””