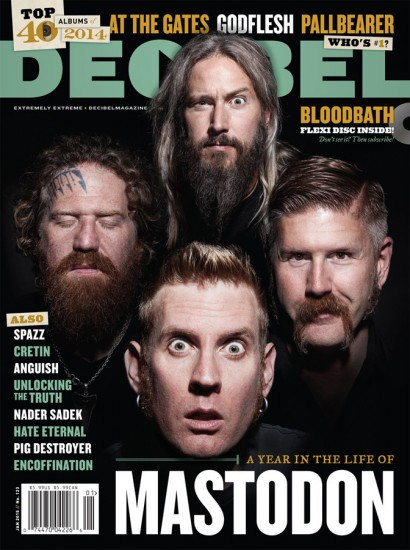 Above is the cover of the January 2015 issue of DECIBEL Magazine. It includes DECIBEL’s list of the Top 40 Albums of 2014. I haven’t received my copy yet, and for all I know, it hasn’t been mailed yet. But the Top 40 list has leaked, appearing yesterday on a Reddit thread. When I first saw that thread, I decided not to post about the list until I had received my copy of the magazine, but the list has started spreading around pretty fast, and the closely guarded secret isn’t a secret any more, so…

As is true every year, DECIBEL’s list is an interesting one that’s sure to spark spirited debate. The album in the No. 1 position is Pallbearer’s Foundations of Burden, followed by At the Gates, Horrendous, Tryptikon, and Godflesh in the #2 – #5 positions, in that order. The Top 10 also includes Thou, YOB, Vallenfyre, Panopticon, and Morbus Chron. Though I think all 10 of these albums are excellent, I’m especially happy to see Horrendous, Thou, Vallenfyre, and Panopticon in such high positions because I dearly love those albums and because the bands don’t have quite the high profile of most other bands in the Top 10 — though they deserve to be in that company.

The balance of the list includes many high-profile names I expected to see (e.g., Behemoth, Agalloch, and Mastodon) and others from deeper underground that, like those four I mentioned above, deserve this kind of exposure (e.g., Dead Congregation, Krieg, Cult of Fire, Teitanblood, Trap Them, Cretin, Midnight, Thantifaxath, and Lord Mantis).

As usual, there will be disagreements over the rankings — I would have put Solstafir’s album higher on the list and At the Gates’ lower, just to pick two examples — as well as complaints about omissions. But as usual for DECIBEL, I think it’s overall a solid list — and for my money DECIBEL still remains the best print metal publication money can buy. Also, since I’m incapable of making a “Best of the Year” list myself, I’m hardly in a position to be critical.

Also as usual, DECIBEL obviously compiled the list with more than a month left in the year, in part because of the lead time required for a magazine to be put to bed, printed, and mailed, and in part because of the tendency of just about everyone to role out end-of-year lists in December rather than January. So some recent and forthcoming releases missed out that deserved consideration. The person who posted the list on Reddit also noted that the list includes releases that came out in December 2013, perhaps to make up for the fact that some December releases don’t make it into DECIBEL’s hands, even as advance copies, before these lists are assembled.