Musical inspiration comes from a wide array of sources. Taken as a whole, it reflects all life experiences, emotions, and thoughts, from the most mundane to the most mystical. In the case of the Greek black metal band Thy Darkened Shade, the music emanates from a desire to invoke Chaos through the unleashing of Lvciferian energies.

It exists as a spiritual devotional, as a path toward self-realization, as a channeling of dark, liberating powers to listeners enslaved by a materialistic world, with each song — the music and the lyrics — constituting a ritual for the summoning of arcane forces. Thy Darkened Shade is a bringer of Promethean fire, the stunning music a means of achieving transformation.

To be clear, I’m not saying I personally know all of this to be true (though the ritual character of the album, beginning with its brief introductory track, is hard to miss). Instead, I’m trying to summarize what I’ve read in interviews of Semjaza, the man who created all the music on their new album Liber Lvcifer I: Khem Sedjet (with others participating in the vocals and the drums) — one interview we published (here) and an even more involved one here. These explanations manifest the inspiration for this music.

As for the music itself, one need not be as serious a student of the occult as Semjaza (and he is quite serious indeed) to appreciate the remarkable achievement of Liber Lvcifer I. You just need ears to hear, an open mind, and a lot of time — because there’s no way you’ll be satisfied listening to this 78-minute opus just once.

I don’t make year-end lists of best albums because I have too much trouble winnowing down all I hear. But I have no doubt that Liber Lvcifer I would be on any list of 2014’s Top 10 that I might be able to create, even if I had to sweat bullets trying to filter everything else into the balance of nine — it’s that remarkable.

The music is black metal because of the spiritual philosophy that inspired it and the connection between its creation and the insights of its creator. But the sound of the music itself is far from “conventional” black metal, with few of the musical tropes that most listeners would associate with the genre. It isn’t the typical flurry of tremolo-picked riffs, blasting drums, and caustic shrieks.

In fact, musically it has much more in common with technical, progressive, and avant-garde death metal bands such as Gorguts, Gorod, Obscura, and even Cryptopsy. It is an explosion of exuberance that, at least to these ears, conveys a sense of delight in the creation of the music and an almost boundless joy in the freedom of composition and performance.

The songs are for the most part electrifyingly energetic and amazingly intricate — purely in terms of instrumental skill, it’s one of the most impressive albums you’ll hear all year. But the songs are also cohesive, written and performed with a deft sense of melody, texture, and rhythmic magnetism. There are striking moments of mesmerizing beauty in the album, in addition to a virtually non-stop display of blazing, blistering, mind-boggling dexterity.

There are few extreme metal albums in which perhaps my fondest memory is the bass playing, but this is one of them. Performed on both six- and eight-string instruments, the bounding bass notes have the warm tone I associate with fretless bass, and the striking sound of those nimble notes is never very far removed from the main flow of the songs. Sometimes the tumult of the other instruments subsides so that the bass is given the spotlight, sometimes the bass notes rise up unexpectedly in the midst of the storm and then fall away quickly, but at all times it’s such a welcome and attention-grabbing sound. 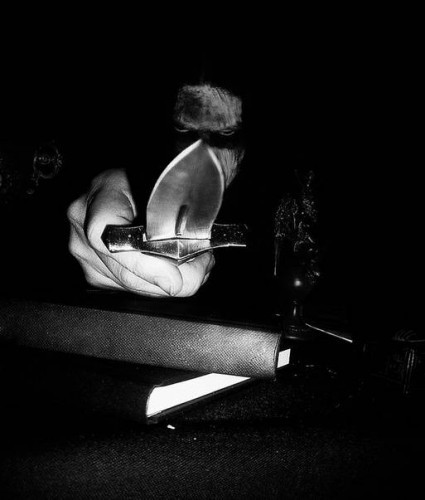 The guitar performance has center-stage most of the time, however, and it’s stunning, with the rhythm guitar turning in a cornucopia of patterns and the lead guitar arpeggios flickering and darting like the flames of a bonfire against a night sky. The guitar tracks are immaculately layered and interwoven to provide a richness of sound and an energetic intensity that’s truly riveting and never loses its attraction despite the unusual length of the album. In a sense, there is an ironic contrast between the bursting-at-the-seams energy of the music and the masterful control over the instruments used to create that feeling of unchained chaos.

The drumming is on par with the skill level of the guitar and bass. It’s wonderfully varied, eye-popping in its athleticism, and keenly attuned to the changes in everything else that happens within the songs. I don’t know who the drummer is — he’s identified only by the initials “H.G.” — but he’s really something else.

For the most part, the vocals are harsh growls and howls, full of passion and vehemence, but as mentioned before, perhaps more at home in the usual motifs of death metal than black metal. But the vocals are not all harsh. Carefully placed throughout the album, there are melodic vocal chants reminiscent of monastic choirs, and they too are among the most memorable moments on the album. I think my favorite such moments occur in “Revival Through Arcane Skins” and (thanks to a guest vocalist) in the closing track, “Daemon Phosphorus”.

In addition to these clean vocal additions, the album is also enhanced and enriched by acoustic guitar melodies, both baroque and neoclassical. They don’t appear often, usually at the beginning or the end of specific songs, but they feel right. You wouldn’t necessarily feel the need for them if they weren’t there, but having heard them, they seem to complete the songs in which they appear, providing a piece of the puzzle you didn’t even know was missing.

Music of this depth, richness, and intricacy is best served by a clarity of production that allows the listener to hear everything that happens — even if so much is happening that multiple listens are required to fully appreciate all the contributions. Thankfully, the production approach and the mix is in complete harmony with the music, for which production credit must be shared between V. Santura of Dark Fortress and Tryptikon, Semjaza, and Stamos Kolliousis. Mixing an mastering credit goes to V. Santura.

Whether you are a skeptic at heart about mysticism and spirituality or someone who embraces the idea of forces that transcend the plane of material existence, Liber Lvcifer I is a rare and remarkable album, a wholly absorbing listening experience that will repay the time you give it and one of the year’s best albums.

Liber Lucifer I was written and performed by Semjaza, with session drums performed by H.G. and chants and other vocal rites provided by The A. The album also includes a guest vocal appearance by Magus Wampyr Daoloth of Necromantia on the song “Daemon Phosphorus”. The cover art was created by Vamperess Imperium.

The album was produced by Semjaza, V. Santura, and Stamos Kolliousis, and it was mixed and mastered by V. Santura at Woodshed Studio. It will be released on CD, vinyl, and digitally on October 31.

The album is out now on W.T.C. Productions and can be ordered here. It’s also now available for download and streaming at Bandcamp — check that out here. Below you can listen to the entire album, and we’ve also included the band’s recent music video for “Revival Through Arcane Skins”.

12 Responses to “THY DARKENED SHADE: “LIBER LVCIFER I: KHEM SEDJET””