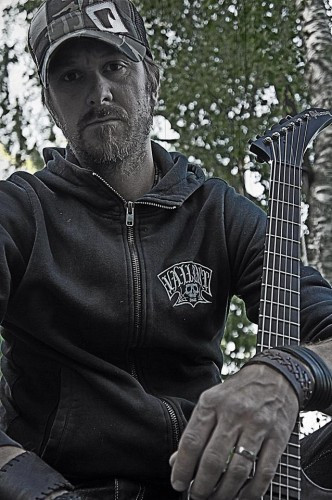 I think it would be “Lightning War”.  It’s a really powerful track with great vocals from Dave Ingram and great whammy leads from Rick Rozz.  A real steamrolling track, Bolt Thrower style!

3.  Since you mentioned Bolt Thrower, I describe your sound to people who haven’t heard it as ‘Bolt Thrower having angry violent sex with Amon Amarth’.  That accurate enough for you?

4.  So let’s go back to the beginning and the origins of this project.  What was your original idea behind this?

The original idea was a 5-song EP with Rogga Johansson growling on all 5 tracks.  But the 5 songs quickly grew into 8.  Rogga, as you know, has many projects and he did not have time for a full album, so he came up with the idea to use more singers.  So I started to hunt for vocalists around friends.

5.  In hindsight are you happy that this has grown into something larger than you initially planned?

Yes, it’s really great! Cool to have so many great guys on this project.  Next up we are going to take on the world. Hahaha

Have just started on the new (3rd) album, both artwork and around 6 songs are in the works.  Some recruiting has also started and some really cool names are on the list.  A cassette was released with two new tracks (“Counterbattery” & “Outnumbered”) earlier this year (already sold out).  A 7″ vinyl will be realesed early next year with the same tracks. Then we are going to work on a split with Rogga Johansson’s Megascavenger. 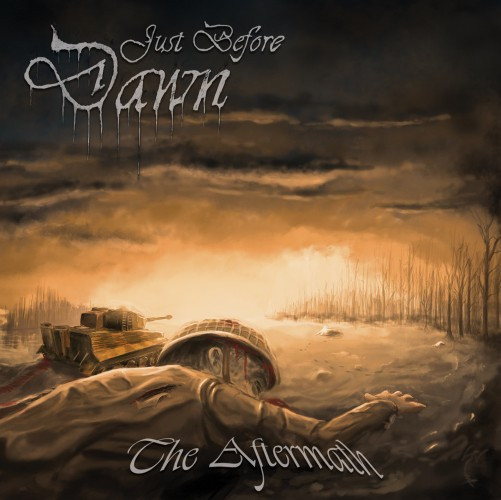 7.  Who haven’t you worked with yet that you really want to?  Do you have a “bucket list”?

Karl Willetts (Bolt Thrower) is one guy that would have been cool to work with, but he doesn’t do guest stuff (or so I’ve heard).   John Tardy & Brett Hoffman,  but those guys may not be so hard to get. Hahaha.  I think I’m gonna ask L.G. (Entombed) in the future also.  I almost got Dan Swanö to do a track but he jumped off last minute.

8.  So the first album was about war, the second is about the aftermath of war.  I can assume the 3rd album will be about the rebuilding process and peace treaties and will feature acoustic guitars, folk instruments, and girlie vocals?

No, the Aftermath is just a brutal name for an album.   The 3rd album is also going for the WWII theme for the most part.

9.  Too bad, as I was hoping for Klara & Johanna Soderberg, from Sweden’s greatest band, First Aid Kit, on the next record.

DAMN, Yes that would have been really cool!! I’ll ask ’em.  Hahaha.  They are really great.

10.  So any chance or plans to bring this to a live setting?

No, this is only a studio project.  I don’t have time for live performances.  I play live with my other band, Blood Mortized.  But if we get a shitload of money maybe we can bring the front to some festivals.

3 Responses to “AN NCS INTERVIEW: 10 BOMBS WITH ANDERS BIAZZI (JUST BEFORE DAWN)”