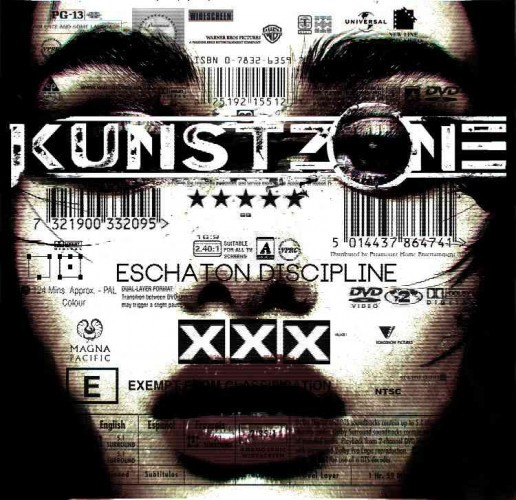 There are a couple of names that I expect to see whenever an industrial metal project slides across ye old NCS promo desk. If it comes from one of those names, then I immediately start looking for the other batch — because if the name Alex Rise seems familiar to you and you’ve been following NCS then you know of his Tyrant Of Death project, and there’s a circle of musicians around him that seem determined to crossbreed into as many different projects as there are available combinations, most of which tend to be heavy on the electronic noise and programmed drums.

One of the more commonly observed names is an enigmatic entity named Candy — who has gone to tremendous lengths to hide its identity — responsible partly for President Streetwalker (which to this day remains the earliest I have ever gotten in on the ground floor for a band), the noisy as all hell Khaozone, and a myriad of other works including contributions to T.o.D vocalist Lucem Fero (Omar)’s own solo releases.

The combination of Alex and Candy this time around has resulted in the project Kunstzone, a name that the band claim translates to “Art Zone”, which I am taking at face value, just as I’ve accepted at face value their claim that the project is ambient, mellow, jazz — “a nice, soothing pie placed on the window in the fresh summer breeze” — and that they are the captains of the starship Enterprise. On Bandcamp the band also lists their location as Syria.

Long story short, the musicians here have a huge layer of obfuscation on top of them, but given their past works and previously stated concepts it’s one that fits well. That said, I am certainly enjoying these two gentlemen’s idea of “calm” and “ambient”.

If you haven’t picked up on it by now, given the logo and the general group’s descriptors, the music of Kunstzone is at odds with what it claims to be. By choice, of course — because Candy more so than Alex has demonstrated a knack for an anarchic, “Let’s burn this place down!” sort of attitude when it comes to music.

When people claim to have come to heavy metal, grind, and hardcore in particular, for the socio-political aspects of the music, I often think of the projects Candy has placed itself into. President Streetwalker was very much a noisy blast of cybergrind, industrialized electronics used for the sole purpose of inflicting pain in as short a time as possible. Kunstzone continues in that grand tradition, but expands itself outward to more fully developed metal songs, placing it in the industrial death metal realm.

Alex Rise finds himself camped behind the drum kit, as well as contributing guitar parts on Eschaton Discipline, and anyone who is familiar with his Tyrant Of Death project as well as the underrated Psychotic Pulse are going to recognize the moments during which the guy has picked up the instruments. If my wild guess is correct, because even with a purchased version of this album it’s still obscure as to who did what, that leaves Candy handling vocals and programming on Eschaton Discipline, although no doubt the writing was probably spread evenly between the two.

That said, Eschaton Discipline is a monstrous creature clocking in at almost twenty-three minutes that, once again, feels like it is going by in the blink of an eye. The beginning of the disc goes by so fast — even though the two actual songs minus the intro are both three-minute meat tenderizers — that the four tunes at the top feel like one track, beginning with (and once again, it’s opposites day in the Kunstzone camp) “Outro (To Nothing And Beyond)” and ending at “Failure State”.

“Failure State” is a dynamic collage of sound, feeling like a mix of multiple TV channels conflicting with each other and the signals of a chemically ridden mind being rewired. It’s an intense experience, especially once you get past the middle with the ultra-percussive drum sample that hits incredibly hard. When the distorted sound that takes over the higher frequencies of the track comes on, then the listener is in for a world of hurt. I actually do enjoy “Failure State”, but the song has quickly marked itself as one of the few tracks that I am genuinely afraid to land on if I fall asleep to my mp3 player with the music playlist shuffled up. The whole back half of that collage is so jarring that it could probably wake the dead.

The frustrating part of Kunstzone is that the folks behind it have obscured themselves and their message so much that even though it’s easy to pick out some of the messaging and common themes that have run through all of the artists’ work, it still feels like we’re not getting the full message. It pains a little bit simply because Eschaton Disciple is a really enjoyable piece of metal — with themes that range from the surveillance state, to control through the usage of media, to the more technological aspects of control. Both Alex and Candy have played with this theme throughout their works, and Kunstzone seems to be the latest statement in that anti-establishment streak and one that feels like it would be a perfect fit for a dystopian cyber future — one that a good case can be made is already here.

The video for “Acolyte”, track three of the Eschaton Discipline experience, pretty much spells it out in an almost “They live” fashion — blasting messages onto the screen whilst a veiled and obfuscated voice screams out into the world. The song itself is a rhythmic bit of gunpowder that ignites and immediately descends into head-nodding grooves for the whole track, up until you start to question yourself as you’re being yelled at: “Acolyte! Bow down! Acolyte! Bow down!”

After the first four tracks, Kunstzone gets a little bit more bizarre, slower, and intense. “Blast” is the song that immediately follows “Failure State” and, if I remember correctly, was initially a demo track that was posted up a little while ago on the Tyrant Of Death facebook, so it’s exciting to see that one transformed into the pummeling monster that it has become. It, like its predecessors “Acolyte” and “Faith Enforcer”, is another tad bit over three-minute beating. “Blast” is the one where I most easily pinned down Alex’s playing, specifically due to one lead that seems to be a favorite effect of his that pops up during the clean-sung chorus. Its a weird, off-tuned, echoey chorus effect, and he chooses patterns of notes that dance around and create a strange harmony.

The closing two songs on Eschaton Discipline are where things slow down and take a brooding turn. “Eschaton Discipline” is the “doom” song of the album and, at close to seven minutes in length, is where the disc gets most of its runtime. It’s the type of song that rotates between a quiet and calm melody and a drop into huge, sustained distorted chords with screaming on top of it. “Eschaton Discipline” is one of the few tracks that features some clean singing within it, though the chosen method is probably closer to intonation that full blown singing.

One of Candy’s trademarks, and one of the things that I genuinely enjoy when they pop up in a project, is that Candy has a sense for inserting samples of radio and TV and morphing them so that they feel like they have a huge meeting. When they arrive at the end of the title track, it sounds once again as if the album is being invaded by radio signals and TV airwaves that are trying desperately to interrupt the Kunstzone broadcast.

Album closer “KUNSTZONE” (typed in all caps) is another dirge of a track but doesn’t run as long. It’s the most industrial of the album, built entirely around some heavy, rhythmic, and percussive samples, with strange noises reverberating in the background. I’m actually not too sure if that song has lyrics, or whether Kunstzone went the Anaal Nathrakh route and just decided to scream in order to close out Eschaton Discipline. If anything, it’s a telling mark that the one song you named after yourselves is the one where all you did was roar for three minutes. Its a purely cathartic track at the end of an already chaotic disc.

Eschaton Discipline is one of those discs that I really wish would get out there, because I think that the artists behind this project are underrated as hell and are putting out some of the best industrial metal, which unfortunately seems to be off to the side of everyone’s radar. Eschaton Discipline feels genuine in its hate and in its portrait of a constantly connected dystopian state. If ever there were an album being sent out in a burst frequency it would probably be Eschaton Discipline.

It’s heavy and crushing, and the distorted noise and filtering on the screaming voices make the disc sound like it is coming from a pirate broadcast through a white noise signal. Hell, this probably ties back into my earlier complaint about not fully receiving the message that Kunstzone are trying to send but this EP is one that has such a passion behind it that it needs to be heard. It’s an explosive protest, so to speak.

If this is what Alex and Candy consider their ambient, calm, smooth jazz disc, then when they make a metal album that they’re willing to properly label as such, I imagine it’s going to be an intensely abrasive experience. As it stands, Eschaton Discipline is like holding a belt-sander to your face.