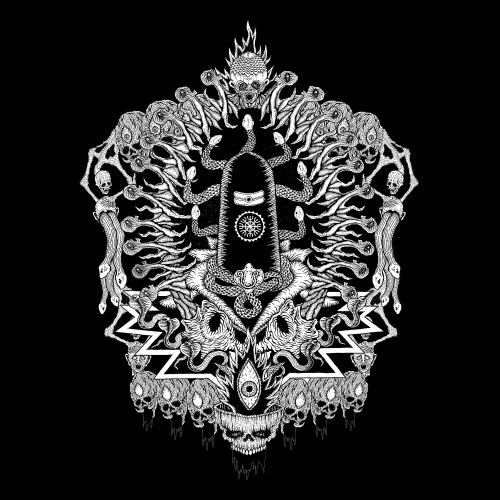 Those vicious Canadian purveyors of Total Death, Vault of Dried Bones, have been preparing once again to open their bomb bay doors and rain destruction from the skies, and their new weapon of choice is a Sri Lankan band appropriately named Genocide Shrines.  This new release from the Vault Cult’s label will be the band’s first full-length album, and its title is Manipura Imperial Deathevokovil (Scriptures of Reversed Puraana Dharmurder).

As an introduction to what this album holds in store, we bring you today the premiere of the album’s third track, “Subterranean Katacomb, Termination Temple (Henotheistic Primal Demiurge)”. Those who may be familiar with the band’s 2012 Devanation Monumentemples EP or the Mahabharat Terror Attack split with Manifestor released last spring may still not be prepared for what it will do your peace of mind (it will leave it in pieces). 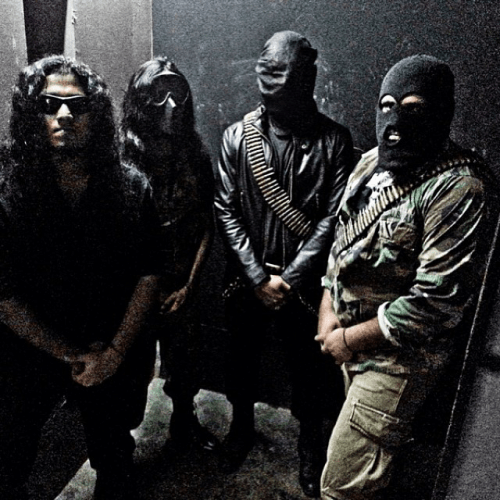 There is a super-heated fury in the music, and in its creators as well. The band have made the following statement regarding this new work:

“We have desecrated your faiths once again. There will be no grey areas. The Shrines have resurrected the ultimate Maranadhipathi to strive towards the abomination of highest of all monarchs and the termination of the Manushya race. Genocide Shrines is Anti-Dharmic and Anti-Colonial. We will hurl burning spears as we erase your dharma through exhuming the breath of Puraana fucking DEATH. Open fire and exit wounds, the goal was always to eliminate The King.”

The song we’re bringing you today is an eruption of overwhelming death metal warfare, a barrage of thundering drum strikes, crashing cymbals, cyclonic riffs, and reverberating vocal horror. Even when the band slow the pace in the song’s mid-section, the sense of remorseless and unstoppable devastation remains vivid, and the final terrifying howl of damnation in the song’s closing seconds may still make the hair on your neck stand up even after the torrent of sonic violence that has preceded it.

But the song is more than a very effective explosion of blackened death metal warfare. Within the blizzard of flying shrapnel and the blast front of napalm detonations are galvanizing rhythms, vicious vocal proclamations, and exotic guitar leads that resonate even after the song has ended.

Relevant links are below, followed by our premiere of “Subterranean Katacomb, Termination Temple (Henotheistic Primal Demiurge)”.