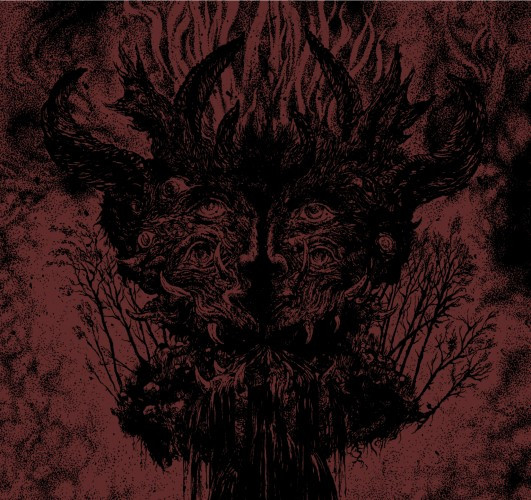 Iceland’s Svartidauði are perfecting the mechanics of tearing apart interdimensional membranes, exposing our ears to emanations from alien domains, while rocking very damned hard at the same time. Their latest offering, which will not be confused with the work of any other band, is a forthcoming two-song release from Daemon Worship Productions and Terratur Possessions entitled The Synthesis of Whore and Beast, and today we give you the chance to hear one of those two tracks: “Impotent Solar Phallus”.

Calling this music “black metal” feels unsatisfying. It’s too meager a description, and may in fact be misleading. “Impotent Solar Phallus” radiates reptilian menace, its exotic chords both disturbing and otherworldly, its booming/tumbling drumbeats conjuring images of a tribal ritual, as practiced by a tribe not found on this planet.

It rips and claws with distorted tremolo knives, the drumming hammers and blasts with destructive intent, and the vocals are maniacally vicious. But it is the band’s success in creating an eerie, disturbing atmosphere charged with dissonant melodies that leaves the most lasting impression. It’s skin-crawling, hair-raising, terrifying music, yet it exerts an undeniably magnetic attraction.

The EP’s first track, “Venus Illegitima”, premiered earlier this month at CVLT Nation and is now streaming on Bandcamp, so we’ve included that track for you to hear as well. It is no less strange, no less dark and threatening, than “Impotent Solar Phallus”, but perhaps more progressive-minded in its unearthly guitar excursions and its spine-shaking drumwork. It’s like the weaving of a massive cobra within striking distance of your face: You want to run, but transfixed by the odd swaying and the slitted eyes, you can’t look away, frozen in place.

All metaphors aside, these two songs are highly imaginative and highly distinctive, the works of a creative (if probably demented) band who have rapidly cemented themselves among the ranks of groups whose every release has become must-listen material for fans of dark extreme music.

The Synthesis of Whore and Beast was previously available on tape last spring but will now be released in a black poly MCD digipack format and as a 12″ MLP with a poster. It includes cover art by Timo Ketola (Davthvs) (Teitanblood, Watain, Deathspell Omega, etc.) and interior art by Timo Ketola and David Glomba, with layout by Brianvdp. We don’t have a precise release date but will update this post when we do.

The two tracks come next… so beware.