“Downwards Deathmarch” is the name of the Half Visible Presence track, and it could hardly be better named. Announced by the sound of a funeral bell against the backdrop of a cold, desolate wind, the song is anchored by doleful, groaning, repeating riffs and slow drumbeats. It’s a deep pit of misery, corroded with distortion and its melody sodden with tears.

The high, wraithlike guitar leads and solo milk the wretchedness and despair for all they’re worth, bringing to mind images of a rudderless soul adrift in the void, while the mix of harsh growls, brief clean vocals, and spoken words drive home the dismal message.

More doom than black metal, the song becomes hypnotic as it makes its slow progress forward, stalking deeper and deeper into a lightless cavity of decaying hopes. An excellent song. 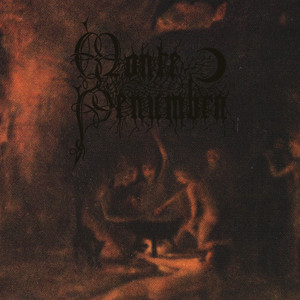 When I first discovered the existence of the split in August, Monte Penumbra’s contribution to it had become available for streaming, and I’ll borrow what I wrote about it then.

The song’s name is “One Is the Alignment of Shrines”. The music is so bleak and grim, so saturated in misery that its oppressiveness hangs like a tremendous pall. At the same time, it’s vibrantly alive, the huge riffs and rumbling drumbeats coming like sharp claws seizing the spine, the lycanthropic howls raising hairs on the neck. The song also includes ghostly clean vocals, which come in when the song accelerates into blasting, grinding mode.

This is the kind of black metal that’s heavy as hell and loses none of its occult, indigo atmosphere despite the introduction of avant-garde elements. Fantastic song.

The split is projected for release in late November by Oslo’s Duplicate Records on limited (300 copies) 7″ black vinyl in a reverse-print colour sleeve with an accompanying insert. There’s a pre-order link below. The songs are also streaming on Bandcamp, though a digital download isn’t yet available.

3 Responses to “SHORT BUT SWEET: MONTE PENUMBRA AND HALF VISIBLE PRESENCE (A SPLIT)”