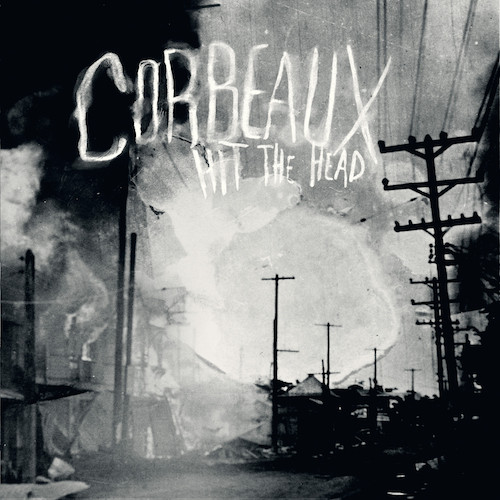 Corbeaux are a French quartet consisting of two guitarists, a bass player, a drummer — and (almost) no vocalist. Their debut album Hit the Head is being released today, and we’re bringing you a full stream of the album’s six songs.

It might be enough to say that if you’re a fan of bands such as Russian Circles, Pelican, and If These Trees Could Talk, you will enjoy this album. But it deserves more than drive-by name-dropping. Especially for a debut album, Hit the Head is a dynamic and engrossing experience.

Both within each song and through the album as a whole, the music ebbs and flows, with changes of pace, volume, and mood that will keep you involved and interested. Anchored by distorted, grinding bass notes and precise but ever-changing drum rhythms and creative fills, the songs spin out a wide array of absorbing dialogues between the dual guitars. 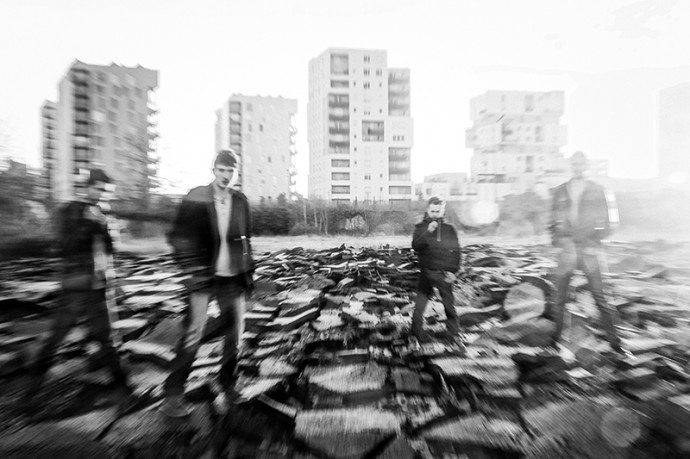 Carefully structured contrasts abound, with the infectious, hard-rocking “La Bagarre” followed immediately by the shimmering ambience of “7th Avenue”, a cosmic drift that becomes a slow build into rambunctious dissonance and squalling feedback. “Sur Un Fil” is light and joyful, like a pleasant daydream, and it’s followed by the clanging chords and rocking backbeats of “Where Is Dave?”

The standout tracks are the longest ones, the two that serve as the album’s bookends — “Cran d’Arrêt” and “Ezimpurkor”. The former elaborates variations on a fascinating theme, eventually becoming a jack-hammering headbanger with buzzing guitar dissonance intertwined with moody rippling arpeggios. The latter is also full of contrasts, from infectious pounding to passages of slow, melancholy, meditativeness, the twin guitars tracing a double-helix of shimmering sound — and near the end, you encounter the album’s only recognizable instance of vocals, clean and impassioned.

The ever-present challenge of album-length instrumental post-rock is holding the listener’s interest all the way through. With an impressive sense of dynamics and obvious skill in the performances, Corbeaux avoid that pitfall. Even the longer songs don’t wear out their welcome — there’s no padding in the music, no bloated passages that might lull listeners into a stupor, just a very enjoyable trip through the imaginings of some creative minds.

The album was recorded and mixed by Amaury Sauvé at La Senelle Studio (Birds in a Row, As We Draw…) and mastered in Stockholm by Magnus Lindberg (Cult of Luna, Abraham) — and it’s being released today. Stream the album below.

One Response to “AN NCS FULL ALBUM PREMIERE: CORBEAUX — “HIT THE HEAD””