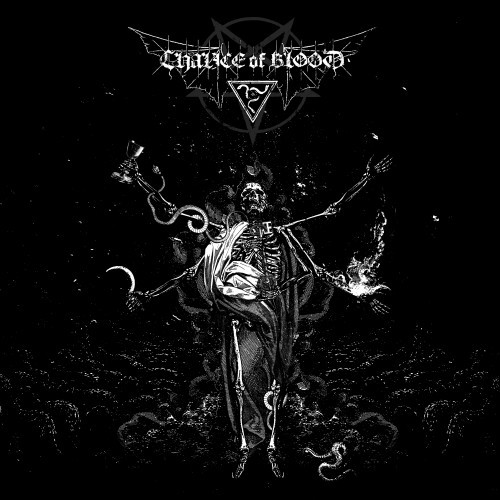 Sweden’s Chalice of Blood announced their arrival in the occult realms of black metal with a three-song demo in 2005 (Angelus Diaboli) and followed that with two split releases, including their excellent 2014 split with Israthoum on the Daemon Worship label. Early next year Daemon Worship will release the band’s most accomplished work yet, a five-song EP entitled Helig, Helig, Helig, and today we bring you the first taste of the new music through our premiere of a track entitled “Shemot“.

Those in search of “atmospheric” black metal or sweeping melodies that tug on the heartstrings will have to look elsewhere. “Shemot” is red of tooth and claw, a predatory assault that’s more interested in ripping out the heart and devouring it. Driven by relentlessly blasting drums and the buzzing whir of fiery tremolo riffs, the music radiates venomous energy, its dark melody full of malevolent threat, the cracked-glass vocals uttering hateful proclamations with bestial vehemence.

There is a pause in the frenzied onslaught, a middle section in which the kick drum segues into a propulsive militaristic rhythm and guitar chords ring with eerie dissonance, before the band unleash one final storming attack on the senses. “Shemot”, like the rest of the EP, is galvanizing music, bent on sending an electric charge through the listeners, and it has a riveting effect.

Helig, Helig, Helig will be released by Daemon Worship on January 15, 2015, and it’s available for pre-order on vinyl at the Bandcamp link below, where you can hear another track from the EP (“Nightside Serpent”). You can find all of the band’s previous releases at this location.

2 Responses to “AN NCS PREMIERE: CHALICE OF BLOOD — “SHEMOT””