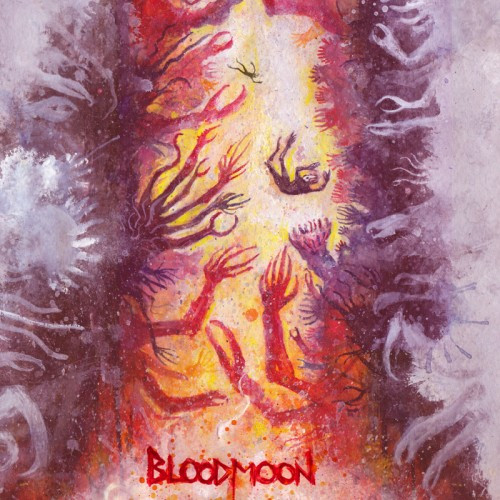 Bloodmoon released their debut album Voidbound near the end of last year on CD and tape, but it has now been remastered by James Plotkin for re-release on vinyl via Black Voodoo Records. I missed the album when it first came out, but have now had the chance to hear the vinyl remaster. The music is really unusual and really impressive, so much so that we’re happy to provide a platform for everyone else to hear the album as well.

The record is only three songs long, but the first two of those are monsters — with “Voidbound” coming in at nearly 18 minutes and “Back World” at more than 13. Even the shorter closing track “The Singing Flame” tips the scales at more than 7 minutes.

Unusual song lengths of this kind are often a sign of great ambitions. Unless your specialty is droning loops, filling such extravagant spaces with music that captures and holds the listeners’ attention is no mean feat. As an artist, you have to have something to say — something that merits all that time — and you have to say it well. There’s no question Bloodmoon are musically ambitious, and there’s also also no question they’ve got talent to match their aims.

The music on Voidbound crosses so many genre lines that it’s difficult to label. It interweaves elements of sludge, doom, post-rock, and progressive metal — not so much moving between the tropes from one to another, but somehow blending them all together at once, and that’s impressive.

There’s an undercurrent of menace throughout this album and an overhang of gloom, but the songs never overstay their welcome — there’s too much happening in them, too many rapid changes of course, for boredom to set it. It’s heavy as hell, and really interesting as well.

Voidbound can be pre-ordered from Black Voodoo here; it’s projected to ship in late December or early January, and at some point the album will again become available for download on Bandcamp as well. Hope you enjoy this album stream as much as I have.

One Response to “AN NCS ALBUM PREMIERE: BLOODMOON — “VOIDBOUND””