Twenty-five years on since their spawning in some Finnish hell pit, Archgoat are as bestial, as primordial, as blasphemous and unrepentant as ever. The proof is in their new album, The Apocalyptic Triumphator, from which we bring you the premiere of a barbaric new song: “Congregation of Circumcised“.

For a band whose roots in the underground go back a quarter-century, they have recorded only two other full-length albums, 2006’s Whore of Bethlehem and 2009’s The Light-Devouring Darkness. (their last EP, reviewed here, was Heavenly Vulva (Christ’s Last Rites) in 2011.) This was due in part to the band’s decision to become dormant for almost 11 years, submerging in 1993 and resurfacing in 2004. But if their releases have been few and far between, every one of them has made a mark. The new one may be the best yet.

As you’ll hear on this new song if you’re unfamiliar with the band, Archgoat have a distinctive and relatively unusual sound for a black metal group. Their strength is in mid-paced and even crawling tempos, and the mood of the music is often shrouded in a heavy cloak of doom. Angelslayer vomits forth his lyrics in deep, noxious croaks and grunts. Sinisterror’s drumming rarely reaches pyrotechnic levels of speed.  Their brand of ferocity shares almost as much DNA with death metal as with black. 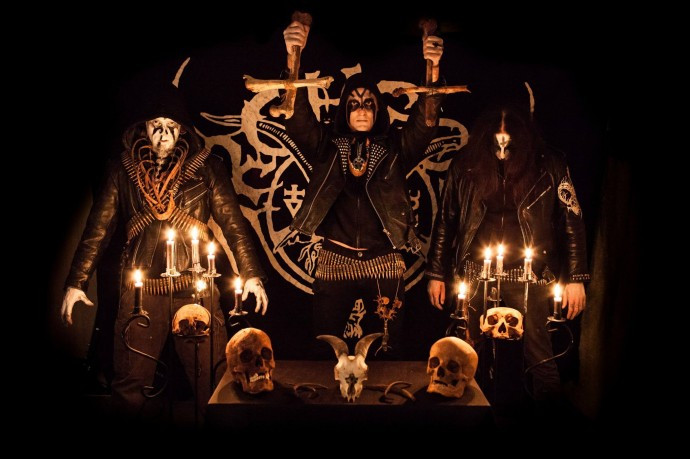 But the true hallmark of Archgoat is the band’s consummate skill in saturating their bone-chilling music with the foul stench of sulphur. Like the new album as a whole, “Congregation of Circumcised” is stripped-down, primal, begrimed, morbid, and infernally depraved. But for all its vile ugliness, it exerts a powerful magnetic attraction.

The scathing, slashing riffs, methodical drum assault, and deep, brutish vocals tap into some primitive part of the brain that instinctively responds to the commanding call of a dark ritual. The clattering snare drums and booming tom progressions have an amazing tone and a prominence in the mix that make them sound like a tribal rite being performed right inside your head, and Ritual Butcherer’s explosive guitar solo spews like a stream of acidic saliva. The music’s powerful invasive effect only grows stronger in the context of the album as a whole, with each song building the power from the one that precedes it. From the outset, the album grabs you by the throat… and then remorselessly tightens the grip.

The Apocalyptic Triumphator will be released by Debemur Morti Productions on January 26, 2015, and is available for pre-order now on CD, LP, and in special editions at this location. It features cover art by the talented Chris Moyen (Beherit, Blasphemy).

One other track from the album has already premiered (“Nuns, Cunts & Darkness”), and you can hear that one below, right after our premiere of “Congregation of Circumcised”.

3 Responses to “AN NCS PREMIERE: ARCHGOAT — “CONGREGATION OF CIRCUMCISED””