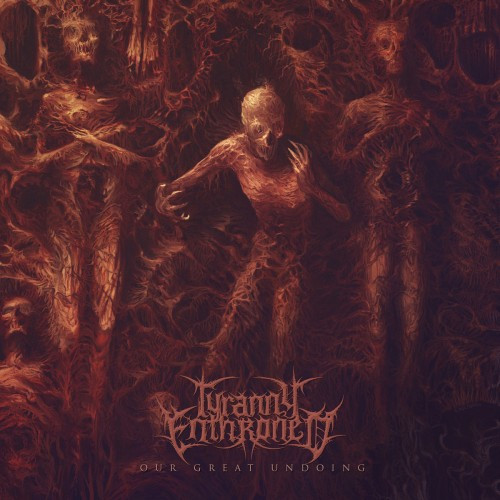 Tyranny Enthroned are one of America’s best death metal newcomers.

That could be viewed as a bit of a hyperbolic statement, but to me it’s absolutely true. I was already in love with the band’s debut Born of Hate, which I have reviewed here, but their sophomore opus Our Great Undoing cements them as a death-dealing titan worth watching.

It would be odd for me to quantify how this album functions as a sophomore release, especially considering just how important the second album is in any band’s career to either showing their stuff or getting dismissed. A lot has changed, and at the same time nothing has. The Polish influences of Behemoth and Hate are still a core of their sound, and they do maintain that layer of American militarism, but their riffing and songwriting is much less derivative and is now molding and establishing more of a definitive identity for them. 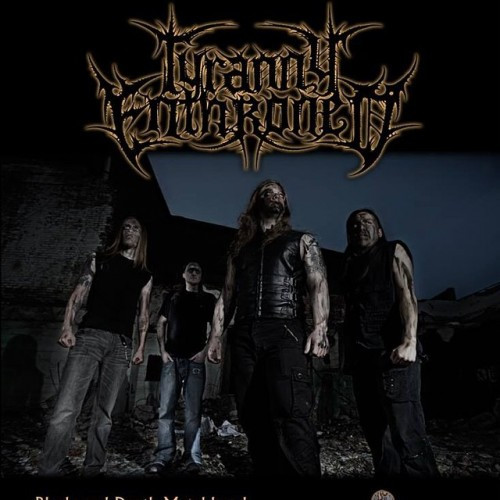 I’m even going to go as far as to say that this is Tyranny Enthroned’s true debut. Born of Hate was just practice.

The first thing that sticks out to me about this album is how dense the compositions are. The interplay of the instruments is most particularly what really makes the record, thanks in no small part to drummer Steve Lee, who mixes up his drum work much more than most drummers in that Polish “beat your face in” mentality. With the way he plays with the feel of different sections, he gives the songs a lot of push and pull, rise and fall.

The other main star of this album is the guitar work in general, and in particular, the choices of chords and chord voicing’s they utilize. They use a lot of the black metal melodic frameworks, but they don’t play it straight, instead making little modifications in the chords to add a bit of twistedness to them, even more so than your usual black metal melody usually contains.

This chord work combined with the band’s odd mix of start/stop and machine-gun rhythms, almost industrial-esque slabs of chunk, and twin-guitar walls of melody, make for an interesting mix of elements that gives Tyranny Enthroned a sound that’s quite a bit darker than contemporaries who are also doing a Polish-influenced sound. It’s abyssal in its blackness, and it’s grotesque in its form.

Jesse McCoy’s vocals have also undergone massive improvement. His lows are much more powerful and fill a bigger aural space while his high-end vocals are approaching the best of black metal tonality.

I really want to avoid doing a song by song here, but I will tell you “Concession” is undeniably the best song on the album — a sprawling seven-minute epic with one of the best mid-sections I’ve ever heard. Mostly because I just love the fucked up melodic progression going on in it. It’s also got the most tempo changes in it and is the kind of thing I really want to hear more of from these guys.

Super-late in reviewing this, but it’s definitely worth having. Tyranny Enthroned should start receiving your attention now if they hadn’t before.

Tyranny Enthroned are embarking on The Path To Annihilation Tour in January and February with Micawber. The schedule can be found in the flyer that follows the album stream below. 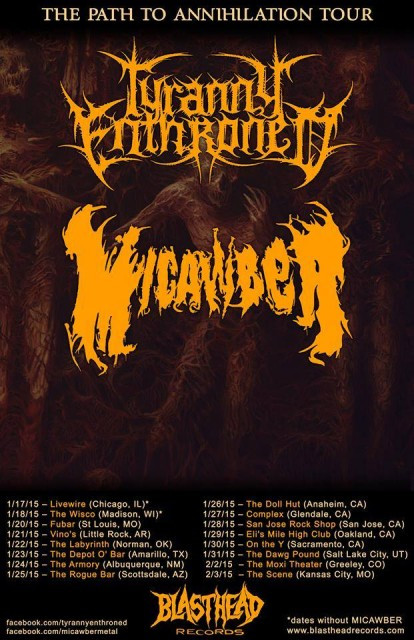 One Response to “TYRANNY ENTHRONED: “OUR GREAT UNDOING””