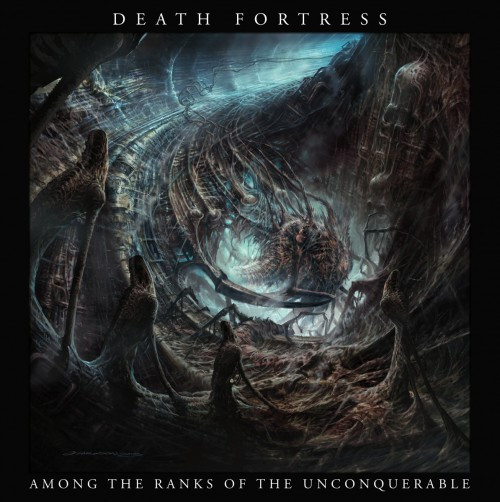 Despite our best efforts – and through no fault of our own – we still missed out on covering a lot of albums this year. There’s simply so much music, and so little time, that stuff always slips through the cracks. And, often, that means some real gems get missed.

Case in point, here we have Among the Ranks of the Unconquerable, a visceral slab of pitch-black perfection, with its foundations firmly rooted in the old school, but with a vision fixed firmly on new horizons.

From the rumbling filth and fury of “King’s Blood”, to the torrential ferocity of “Arrogant Force”, the three-piece meld buzzing, blistered tremolo melodies, choppy, guillotine riffs, and dense, choking basslines into a heaving mass of heretical heaviness, bolstered by a feverish array of scorched-earth blast-beats and shifting, tectonic rhythms.

The band aren’t afraid to pull back a little when the occasion calls for it though, such as for the drawn-out and doom-laden conclusion to “Fifth Season”, where they rein in the chaos and calamity in order to allow the ominous atmospherics and bleak, godless melodies room to breathe and germinate like pustulent plague-flowers of disharmony and disgrace.

The title track, “Among the Ranks of the Unconquerable”, is a malevolent mid-paced stomp of heaving riffage and brash, swaggering drum work that slowly gathers momentum, building to a gloriously evocative, brilliantly moody mid-section of stretched-out time and tortured melody, while “Pride of the Enslaver” is a more feverish conflagration of might and majesty, which throbs and pulsates with eerie, misanthropic life.

This is a pretty fantastic release, truth be told. Heavy in terms of both sheer sonic heft and pure emotional weight, it melds atmosphere and aggression seamlessly, a marriage of beauty and the beast which rewards the listener the more they delve into the album. A worthy (albeit late) addition to anyone’s year-end list.

Among the Ranks of the Unconquerable is available as a name-your-own-price download on Bandcamp, and it can be ordered on vinyl here. Stream it below….

2 Responses to “DEATH FORTRESS: “AMONG THE RANKS OF THE UNCONQUERABLE””