“The Aftermath captures and combines all the qualities that make this kind of old school death metal a primal, undying force while at the same time enriching the canon with songs that are vibrant and memorable. I think you’d have to be very jaded and hide-bound not to feel the spark, no matter how wedded you may be to the classics. And therefore I say, it’s unusually good.”

Part Bolt Thrower tank attack, part Swedish buzzsaw orgasm, the album is one highly infectious track after another. And that proved to be the biggest problem I confronted: which song to pick for this list? After much vigorous debate with myself, I settled finally on this one: “Lightning War”, which features none other than Dave Ingram of Bolt Thrower and Benediction on vocals and a searing whammy-dive solo from Rick Rozz (ex-Death, Massacre). 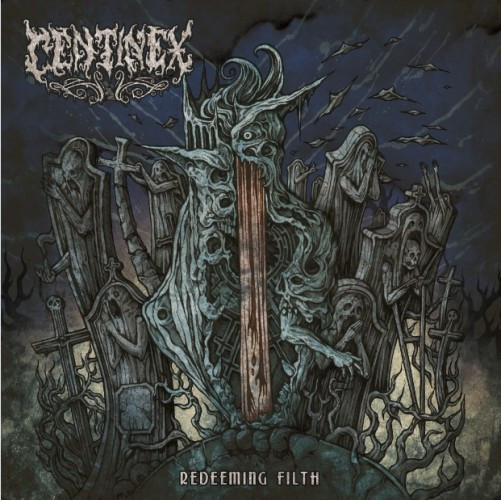 After eight albums going back to 1992′s Subconscious Lobotomy and a dozen shorter releases, Sweden’s Centinex disbanded in 2006 — but they crawled out of their grave this year with Agonia Records’ release of a new album named Redeeming Filth. It features cover art by one of our favorites, Romanian artist Costin Chioreanu of Twilight 13 Media as well as a big slug of gruesome death metal delights.

I don’t mean to suggest that this Centinex is the same band who released Subconscious Lobotomy or even the same one that released their last album before the break-up (2005′s World Declension). The only member of the current band who has been in the line-up since the beginning is bassist Martin Shulman, and none of the other current members was around even for that 2005 album. But they’re hardly newcomers to the scene: Sverker Widgren (Demonical, Diabolical) on guitars; vocalist Alexander Högbom (October Tide, Spasmodic, Volturyon); and drummer Kennet Englund (Interment), who was also in Centinex from 1999-2003.

Like that Just Before Dawn album, this one includes many worthy candidates for our “most infectious” list. I’ve chosen this one not only because of the atmospherically morbid crawl that interrupts the on-rushing freight train but also because I really enjoy chanting “MOIST PURPLE SKIN” right along with the band.

In May we had the privilege of premiering a full album stream of one of my favorite 2014 releases, Cursed Redeemer by Miasmal, and it’s the source of the next addition to this list.

Miasmal (who include two members of the excellent Agrimonia) call Gothenburg home, but don’t be fooled by the geography: This isn’t melodic death metal (though the songs do include a slew of memorable melodic hooks), and it’s not predominantly gore-drenched or doom-driven death metal either. Miasmal specialize in the strain of Swedish death metal that was influenced in its early development more by punk and d-beat hardcore than the scene in the U.S. But these dudes also know how to kick out some mighty galvanizing thrash licks, too. And they also deliver blunt-force trauma with convincing enthusiasm. More words from my review:

“Miasmal pride themselves on delivering no-bullshit, no frills extremity with a DIY rock ‘n’ roll ethos, but even though the band don’t put much stock in showing off, their instrumental chops still shine through. The flash-fired riffs are meaty and golden, the drum work drives like pistons firing on all cylinders, and the guitar solos are downright searing.

“Frontman (and co-guitarist) Pontus Redig (who’s also in Agrimonia and Martyrdöd) also brings great emotional range to his vocal performance. It ranges from ‘really pissed off’ to ‘I want to brain you with a brick and then gut your whole family with a carving knife’. You may think I’m exaggerating, but you’ll see. His high-range howls hold nothing back.”

This is the third album featured in this post that provided multiple candidates for this list, but in my addled brain “Until the Last” rose to the top. Enjoy…

9 Responses to “OUR LIST OF 2014’S MOST INFECTIOUS EXTREME METAL SONGS: PART 7”