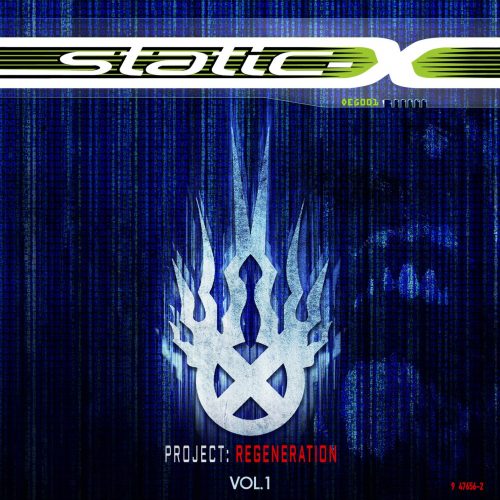 Static-X I think are a pretty niche band, but I personally loved their brand of dance groove industrial metal.  I thought Wayne Static was a great vocalist, and except for a couple of questionable albums, their discography was always reliably good, assuming you liked the premise of their sound.  Project: Regeneration Vol.1 is the first in a series of two albums that Wayne Static had started demo-ing prior to his death in 2014.  Helmed by the band’s OG lineup of bassist Tony Campos, guitarist Koichi Fukuda, and drummer Ken Jay, the band decided they’d try to pay tribute to their departed friend and bandmate while doing something for the fans, and finish what he started. END_OF_DOCUMENT_TOKEN_TO_BE_REPLACED

The path Centinex have charted since their return in 2014 has been an interesting one, if not one of the more uncompromising returns out there. They’re a band who are meant to be taken at face value, a death metal group playing the most stubborn version of it that they can, and benefiting from a renewed interest in that particular sound right around the time they came back.

The band exists partially as the other side of a death metal coin for bassist Martin Schulman (and at this point basically the last one standing of the earliest formations of the band) with the other half being a more modern-oriented death metal group with former Centinex members in the form of Demonical. END_OF_DOCUMENT_TOKEN_TO_BE_REPLACED

Felicitously, I discovered quotations from others about this new EP by the Texas band Oil Spill that seemed quite fitting, and they had the side benefit of saving me a bit of work in coming up with my own verbiage. These two are from commenters on the EP’s Bandcamp page: END_OF_DOCUMENT_TOKEN_TO_BE_REPLACED

We begin with a jackhammering, shivering, and slithering piece of death metal menace, complete with thoroughly beastly vocals and twisted melodic accents and grooves that both prove to be ridiculously catchy. I could swear they actually used a heavy-caliber machibe gun instead of drums for parts of this, and that they tortured a poltergeist for the solos. END_OF_DOCUMENT_TOKEN_TO_BE_REPLACED

After eight albums going back to 1992’s Subconscious Lobotomy and a dozen shorter releases, Sweden’s Centinex disbanded in 2006 — but they crawled out of their grave in 2014 and released a comeback album named Redeeming Filth, which was a hell of a comeback. And I put a deliciously morbid track from that album (“Moist Purple Skin”) on my 2014 Most Infectious Song list. In 2016 they released a killer follow-up with Doomsday Rituals, which is the source of the first song in this installment of the 2016 list. END_OF_DOCUMENT_TOKEN_TO_BE_REPLACED

(DGR embarks upon a review of the new album by Sweden’s Centinex.)

One of the interesting things about the recent wave of death metal revivalism that has been slowly worming its way through the metal scene over the last few years has been the resurgence of bands who had disbanded years ago. Centinex are one such group, having been on hold for the better part of eight years before returning with 2014’s Redeeming Filth — an about as red-meat-as-they-come, Swedish death metal disc.

It was a throwback in a sense, as Centinex have made no qualms about the fact that they aren’t exactly aiming to be innovators, just playing something that they know the in’s and out’s of and had been doing for a long time, and playing it well enough to dish out good music in that genre.

Centinex are one of those groups who are proudly a genre-fare band, which is actually something of a rarity these days. They’re happy to make meatheaded and Cro-Magnon-level death metal, comprised of huge chugging grooves and thick-sounding drums that sound like piston hammers. In an odd way, they are a throwback to a sound that has never really gone away, but has mutated into a variety of different and faster forms. Centinex choose to be the slow-moving grinder of the mix, albeit with better production.

July 8th, 2016, saw the group release the follow-up disc to Redeeming Filth — one that the band have said they weren’t going to wait around to record – entitled Doomsday Rituals. It’s as good a sign as any that Centinex are making zero attempts to slow themselves down and, if you’ll forgive the pun, have finally fallen into their groove. Interestingly enough, though, despite the hallmark mid-tempo grinders Centinex built Redeeming Filth out of in their proud honoring of the traditions of yore, Doomsday Rituals actually steps on the accelerator a bit — and that is where things get fun. END_OF_DOCUMENT_TOKEN_TO_BE_REPLACED

But first I want to publicly thank these four dudes: END_OF_DOCUMENT_TOKEN_TO_BE_REPLACED

The band’s current line-up, which is different from the one that released eight albums prior to the disbanding of Centinex in 2005, is truly impressive: Martin Schulman (Demonical) on bass, Sverker Widgren (Demonical, Diabolical) on guitars, Alexander Högbom (October Tide, Spasmodic) on vocals, and Kennet Englund (Interment, Centinex 1999-2003). And so is the new song that premiered yesterday. END_OF_DOCUMENT_TOKEN_TO_BE_REPLACED

Death metal will never die, and some death metal bands are really hard to kill, too.

After eight albums going back to 1992’s Subconscious Lobotomy and a dozen shorter releases, Sweden’s Centinex disbanded in 2006 — but they crawled out of their grave in 2014 and released a comeback album named Redeeming Filth, which was a hell of a comeback. And they have another album on the way now. END_OF_DOCUMENT_TOKEN_TO_BE_REPLACED

“The Aftermath captures and combines all the qualities that make this kind of old school death metal a primal, undying force while at the same time enriching the canon with songs that are vibrant and memorable. I think you’d have to be very jaded and hide-bound not to feel the spark, no matter how wedded you may be to the classics. And therefore I say, it’s unusually good.” END_OF_DOCUMENT_TOKEN_TO_BE_REPLACED