(DGR embarks upon a review of the new album by Sweden’s Centinex.)

One of the interesting things about the recent wave of death metal revivalism that has been slowly worming its way through the metal scene over the last few years has been the resurgence of bands who had disbanded years ago. Centinex are one such group, having been on hold for the better part of eight years before returning with 2014’s Redeeming Filth — an about as red-meat-as-they-come, Swedish death metal disc.

It was a throwback in a sense, as Centinex have made no qualms about the fact that they aren’t exactly aiming to be innovators, just playing something that they know the in’s and out’s of and had been doing for a long time, and playing it well enough to dish out good music in that genre.

Centinex are one of those groups who are proudly a genre-fare band, which is actually something of a rarity these days. They’re happy to make meatheaded and Cro-Magnon-level death metal, comprised of huge chugging grooves and thick-sounding drums that sound like piston hammers. In an odd way, they are a throwback to a sound that has never really gone away, but has mutated into a variety of different and faster forms. Centinex choose to be the slow-moving grinder of the mix, albeit with better production.

July 8th, 2016, saw the group release the follow-up disc to Redeeming Filth — one that the band have said they weren’t going to wait around to record – entitled Doomsday Rituals. It’s as good a sign as any that Centinex are making zero attempts to slow themselves down and, if you’ll forgive the pun, have finally fallen into their groove. Interestingly enough, though, despite the hallmark mid-tempo grinders Centinex built Redeeming Filth out of in their proud honoring of the traditions of yore, Doomsday Rituals actually steps on the accelerator a bit — and that is where things get fun. 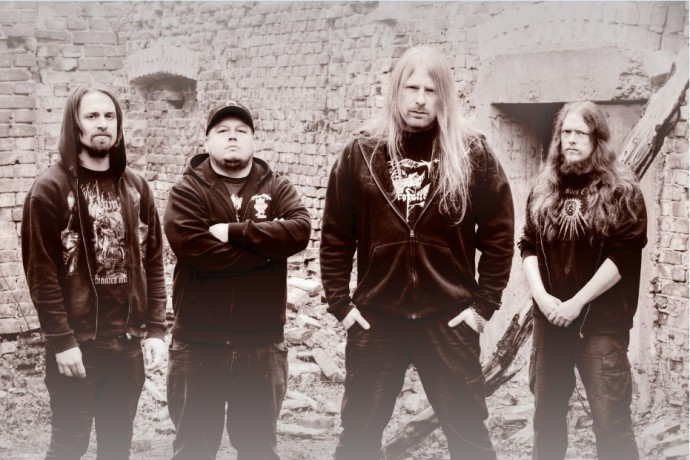 The discs are pretty much siblings; the group don’t move things forward — in fact, where Doomsday Rituals differs from Redeeming Filth is that it has a slightly larger ratio of faster songs and the vocal attack has a little bit more bite. Other than that, you’re still getting a large, stewing pot of lyrical gore and disgusting flesh.

Doomsday clocks in at a little bit over a half hour of music and that actually seems to travel faster than you would assume initially, as the first three songs of “Doomsday Rituals – Flesh Passion”, “From Intact To Broken”, and “Dismemberment Supreme” all run into one another with the slowest track being the last one.

Quite a few of the songs actually have little to no opener on Doomsday Rituals, so the disc has a snappy tempo to it — which is probably what has been providing the impression that Doomsday moves quicker than its predecessor disc. One song will end, there’s a half second breath, and you’re right back into the next guitar riff as it oozes its way across the landscape. Going by their guitar tone, at the very least you could never accuse Centinex of abandoning the “filth” part of their discography.

Despite the consistent throughline on Doomsday Rituals there are a handful of truly standout tracks that rise above their compatriots. In this case there’s six of them, and most are the faster songs — with one exception that has stood out mostly for its lyrical qualities more so than its mid-tempo chug.

There are two very hefty sides to what Centinex do and that combine to form their style of “Swedish Death Metal”: They have a quicker-moving side that has some thrashier elements hidden within it (especially in the up-down style of drumming), and then they have their slower, grindier songs where you hear that much-lauded chainsaw guitar tone that people often talk about within this genre.

With Doomsday Rituals, the draw lies in the faster songs, so tracks like “Sentenced To Suffer”, “From Intact To Broken”, “Generation of Flies”, and “Exist To Feed” tend to be the bigger draws. Opening song “Flesh Passion” is also up there, with a militaristic and percussive intro that builds into the song proper, but “From Intact To Broken” just annihilates all within its path, so that when they run together (as previously mentioned), “Flesh Passion” feels like a build into that maelstrom.

“Sentenced To Suffer” was one of the first tracks the band led off with in their promotions of the new disc, so it should be pretty familiar. But if not, “Sentenced To Suffer” is one of the shorter songs on Doomsday Rituals but manages to pack a lot in its two minutes and forty-some-odd-seconds of playtime. “Generation Of Flies”, a play on words for Generation Of Lies, is another one that moves quickly — although it lumbers itself around a bit during the chorus when the line “a new generation of flies” is growled.

“Exist To Feed” is probably the most dynamic one of the group mentioned so far, as it shifts tempo more obviously than the others for a real solid growled, built-for-the-crowd chorus line, which actually kind of makes Centinex feel like a power-pop death metal band, mostly because despite the fact that they’re writing bludgeoning, caveman-worthy death metal, they have a knack for a chorus hook that seems to lodge itself in your skin.

It’s the following line that sold me, the real simple “Die, Motherfucker, Die”. Now those three words have quite a bit of cachet in more popular music and I think that’s partially why the song sold itself to me, because hearing “Die, Motherfucker, Die” in between the more serious rip-and-tear aspects of a death metal disc is just enough to pull me out of the my listening and catch me off guard just about every time it hits. “Death, Decay, Murder” is a fun song built around some singularly focused lyricism, but it’s that singular focus that makes the song grow on you.

Recently I have found the execution vs. innovation debate being reignited in my head. Said debate is likely going to be argued about until the end of time, but this year seems to be the year where I find myself falling on the execution side of the debate. I’ve found myself drawn to the sort of straightforward attitude that some bands have, where they aren’t really aiming to make some huge revolution in music but instead just play their chosen genre really well.

Centinex have a sort of earnestness in how they approach their branch of the festering death metal tree — it is basically so red meat that it couldn’t possibly get more rare without being still attached to the animal. You know where the band are going pretty much from moment one, and by moment five you at least know exactly what you are in for.

Centinex are what they proclaim themselves to be from the get-go. Doomsday Rituals is super straight-forward, kind of proudly silly in its gore-fueled allegories, fun as hell death metal with fat, solid grooves, drumming that could shake the earth, and a low end that propels things forward for a half hour and then loops back around to do it all again.

Doomsday Rituals is out now on Agonia Records.

One Response to “CENTINEX: “DOOMSDAY RITUALS””