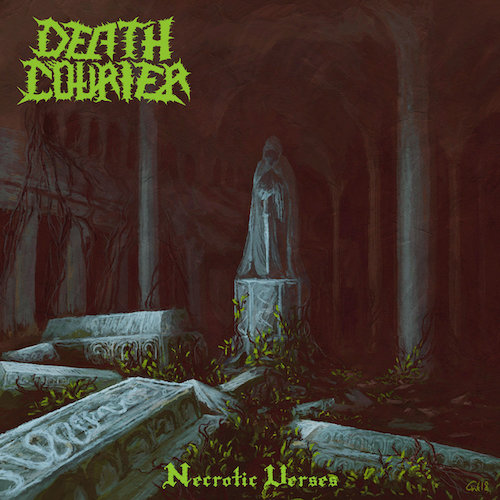 The name Death Courier has a history in the Greek metal scene that goes back to the first of their early demos in 1987, and with an extended break that began after the release of their 1992 debut album (Demise), that name is still alive. Their first studio after the band revived, Perimortem, was released in 2013, and now a long seven years afterward Transcending Obscurity Records has set June 5th as the due date for Death Courier’s third record, Necrotic Verses.

The first song released for listening off the new album was “Mourning Ecstasy“. It’s a fast death/thrashing escapade — an electrifying torrent of thunderous drumming, ecstatically vicious riffing that seethes and pummels, and vocals that sound like a rabid mastiff. It’s over almost before you know it, but the kind of song that leaves you hungry for more, which is why it made a good choice for the album’s first teaser.

But now it’s time for all you miscreants to be fed again, and we’re here to help stuff your head with graveyard nutrients as we premiere a song that reveals other dimensions of Death Courier‘s morbid and malevolent talents. END_OF_DOCUMENT_TOKEN_TO_BE_REPLACED

We begin with a jackhammering, shivering, and slithering piece of death metal menace, complete with thoroughly beastly vocals and twisted melodic accents and grooves that both prove to be ridiculously catchy. I could swear they actually used a heavy-caliber machibe gun instead of drums for parts of this, and that they tortured a poltergeist for the solos. END_OF_DOCUMENT_TOKEN_TO_BE_REPLACED

I confess that my decisions may have been influenced by the bleak feelings of dismay that I’ve been experiencing over the results of a certain referendum across the Atlantic coupled with the celebratory gasbaggery of a certain apricot-faced hellbeast hoping to capitalize on similarly ignorant, bigoted, and self-destructive impulses among the electorate on this side of the ocean. But I’ve also attempted to express my foul emotional state in a musically diverse way. END_OF_DOCUMENT_TOKEN_TO_BE_REPLACED 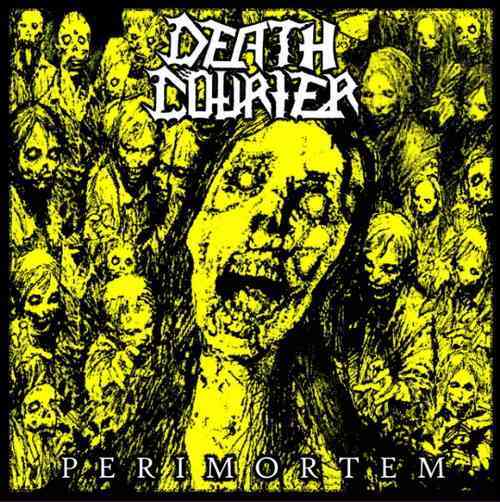 (TheMadIsraeli has found time to whip up a few quick reviews while participating in the Seattle NCS Confab, and this one seemed like a good pick for today.)

So, here we have a band who have been inactive since fucking 1992. They have been reformed by the bassist/vocalist (who seems to be the songwriter) with two new guys (being a three-piece seems to be the Death Courier “thing”). The original guitarist is dead, and I don’t know why the drummer didn’t come back.

I don’t pay much attention to Greek death metal — I usually find it underwhelming — but Death Courier’s brand of deathgrind is a fucking beastly affair, and Perimortem is both savage and catchy as shit. Short songs (the album is only 19 minutes long), chainsaw guitars tuned down to B, old-school vomity death vocals, grinds, slow drags out the ass, classic Swedish style riffing that brings forth memories of bands such as Bloodbath and Hypocrisy, and devastating Suffocation-style breakdowns: it’s a pretty satisfying meal for its insanely short duration. END_OF_DOCUMENT_TOKEN_TO_BE_REPLACED