I confess that my decisions may have been influenced by the bleak feelings of dismay that I’ve been experiencing over the results of a certain referendum across the Atlantic coupled with the celebratory gasbaggery of a certain apricot-faced hellbeast hoping to capitalize on similarly ignorant, bigoted, and self-destructive impulses among the electorate on this side of the ocean. But I’ve also attempted to express my foul emotional state in a musically diverse way. 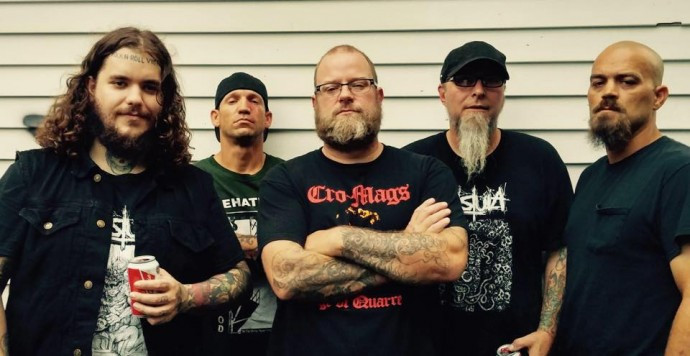 The first item in this collection is a video for the song “Morgue Attendant” off the new album by Ohio’s Fistula. The name of the album is Longing For Infection and it’s set for release by Patac Records on July 15, with delectable artwork by Jason Barnett. The video was created by King of the Witches. It’s disgusting.

The song was inspired by the true story of a Cincinnati sicko who admitted to raping hundreds of corpses over his sixteen-year career as an employee in a morgue. On the bright side, at least the people being violated in these scenes (both real and simulated) of necrophilia, mutilation, dissection, and general maggot-ridden depravity seem to be dead.

As for the music, it’s an ugly, heavy, chain-dragging, teeth-kicking, bare-knuckled piece of mixed martial arts. It’s quite headbangable, too.

Check out another song from the album after the video. 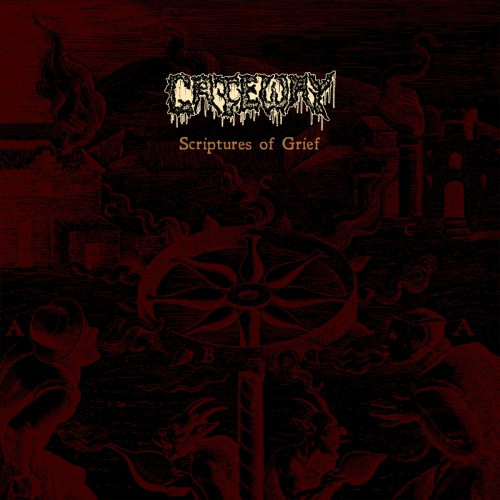 Gateway is a one-man band from Brugges, Belgium. I briefly reviewed the band’s two-song single Sights of Malevolence last fall, and now Gateway has a new three-song EP named Scriptures of Grief scheduled for release on July 1. The second track is available for streaming below. It’s as immense as a very immense thing.

The long, slow, groaning, radioactive chords that launch the song and the abysmal, abyssal gurgling and growling that accompany them feel like a life-sucking black hole spooling up to full strength. And when the drums kick in and the pace begins to quicken, the music becomes a titanic, rolling death/doom demolition job surrounded by a dense, shrapnel-littered, gale-force swarm of sound.

The head-wrecking grooves in the song are also stupendous; this leviathan of a track is as catchy as it is remorselessly crushing. It’s as crushing as a very crushing thing. 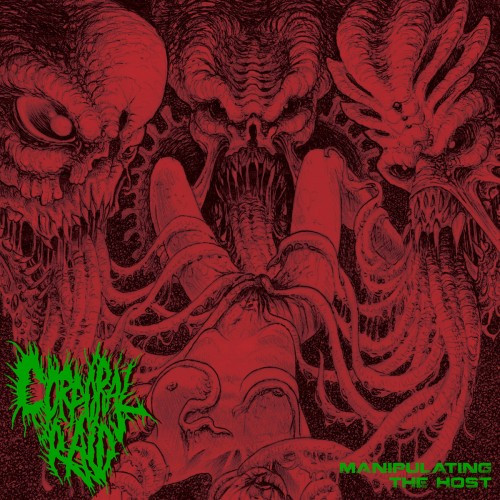 One of those premieres I mentioned at the outset of this post was a stream of the indescribably decimating new album by Madrid-based Internal Suffering. It happened that not long after posting the premiere I saw a recommendation by our friend Vonlughlio that was very much in the same obliterating vein, and that’s the next stream I have for you.

It’s a full run of an album called Manipulating the Host by Corporal Raid, who are based in Milan, Italy. The album was released on June 23 and is available for download on Bandcamp. It’s the band’s third album overall — and the first in 11 years!

This is a 10-song tornado of feral, brutalizing deathgrind, with all but one of the songs expiring before the two-minute mark. It’s a thoroughly militaristic, convincingly barbaric assault. The vocals are a combination of gurgles, squeals, and grunts, all of which sound like they emanate from a throat choked with vomit. The grooves are heavy enough to crack pavement; the drumming is berserk; the riffs are explosive. What’s not to like? 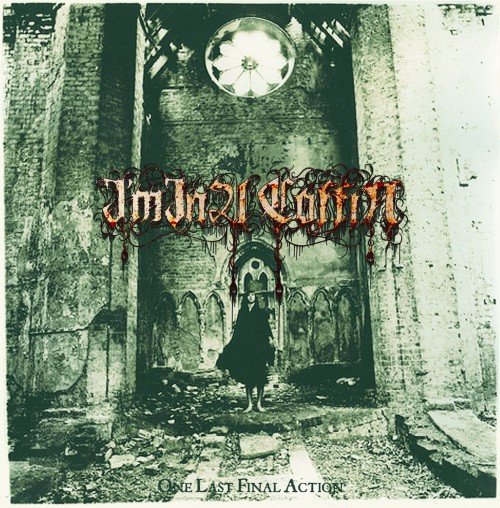 I’M IN A COFFIN

I’ve realized only recently what a treasure-trove of fine music is to be found through the Bandcamp page of the Mexico City label Self Mutilation Services. My most recent discovery is the album you can hear next, by a band named I’m In A Coffin, whose two members appear to be split between Texas and Massachusetts.

One Last Final Action is the group’s second album, which follows the last one by roughly eight years. And if you haven’t yet made some guesses about the music based on the names of the band and the album, further clues might be gleaned from song titles such as “Wrist Deep In Depression”, “Vein Deep In the Solution”, and “Life Is My Coffin”.

I’ve only started making my way through the album, and so will only comment about the amazing first track, “I’m A Weapon Against Myself”. The vocals are strikingly agonized, capturing the disturbing sensation of a complete and final emotional breakdown. The backing instrumentation is a slow loop of depressive chords and methodical beats, with a simple but gripping melody. As the intensity builds, the increasingly anguished atmosphere of the song transforms it into a monument sculpted from tears. 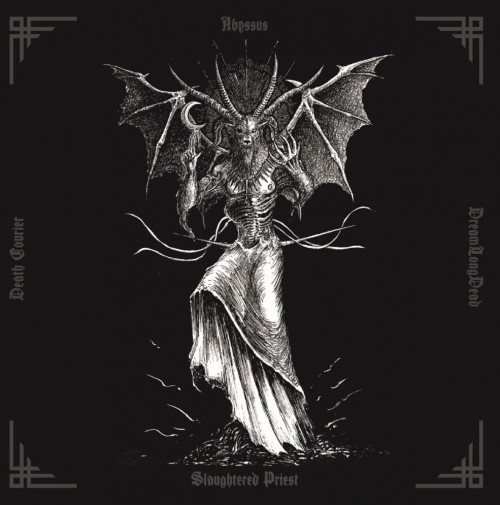 The Greek band Death Courier released their earliest demos in the late 1980s, split up in 1993 after releasing their debut album Demise, and then became active again in 2009 with an altered line-up. A second full-length (Perimortem) was released in 2013 (and reviewed by us here), and this year they’ve participated in a four-way split with Abyssus, Slaughtered Priest, and DreamLongDead. Yesterday I discovered a YouTube stream of Death Courier’s contribution to the split, and really like it.

The song’s name is “Immune To Burial”, and man, it’s a thoroughly vicious, high-octane, completely electrifying amalgam of death metal and thrash with a charred black coating. The riffs are both lethal and catchy, the rhythm section will get your whole body moving, and the vocals are positively bestial.

P.S. Shortly before launching this post, I discovered that the entire four-way split is streaming and available for name-your-own-price download at Bandcamp. I’m eager to check out the rest of it — I already know that Abyssus is really damned good, and I’m curious to see what the other two bands are like if they’re keeping such fine company. 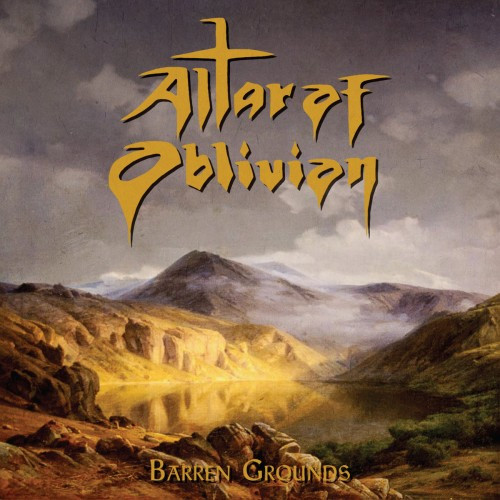 To conclude this round-up, I have a well-earned exception to our Rule. It’s an advance track named “State of Decay” from Barren Grounds, which is the new EP by Altar of Oblivion. It’s this Danish doom band’s first release since 2012’s Grand Gesture of Defiance, and it’s due for release by Shadow Kingdom Records on August 30.

This new song is ominous and chilling, but it has very strong melodic hooks propelled largely by the very strong vocals, along with some ridiculously headbangable riff chuggery and wrenching guitar leads.

6 Responses to “SEEN AND HEARD ON A SUNDAY: FISTULA, GATEWAY, CORPORAL RAID, I’M IN A COFFIN, DEATH COURIER, ALTAR OF OBLIVION”