For yet another week I’m devoting this backward look at metal’s past to a band I’ve only recently discovered. The band is Disincarnate, and the music I’ve chosen to stream is their lone album, 1993’s Dreams of the Carrion Kind.

In 2001, Murphy was diagnosed with brain cancer but recovered after surgery. He has been a busy record producer and operates a recording studio (SafeHouse Production), and he has made guest appearances on dozens of albums (listed here). 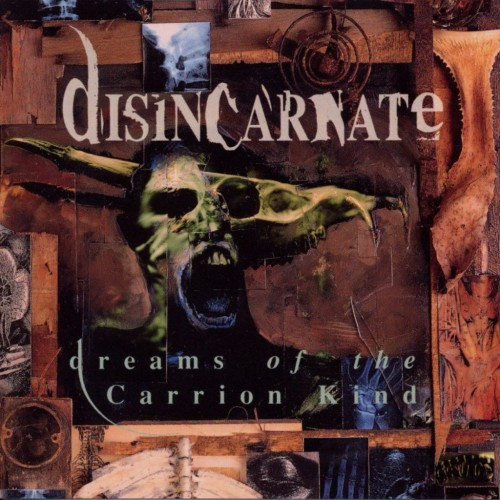 Dreams of the Carrion Kind is still a very impressive album 23 years after its release, and not surprisingly, it’s Murphy’s guitar performance that still makes it stand out. There’s a seething, sinister, morbid quality to the riffs and guitar leads, which are alternately jabbing, buzzing, skittering, and hammering, usually at high speed (and credit should be given to rhythm guitarist Jason Carman’s fleet-fingered work, as well as Murphy’s).

There’s a high level of intricacy and technical flash in the guitar performances on the album that sets it apart and makes it a riveting listen decades later. While the super-charged riffs are dismal and almost atonal, Murphy’s soloing rings out like clarion calls all the way through the album. The tone is high and piercing, and there’s so much volcanic shred in most of them that it will roll your eyes back in your head. But the solos are also quite varied in their style — they’re not being pumped out in a formulaic way, but reflect the exuberance of someone who’s in the throes of a creative conflagration. 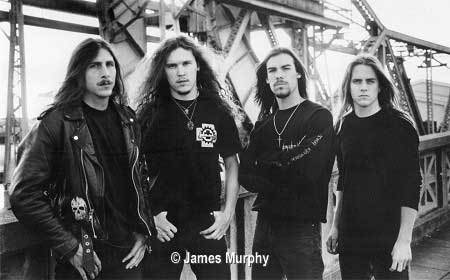 There are few places on the album where Disincarnate ease back on the accelerator and drop into gruesome, ghastly, doomy crawling, but when it happens (as in the song “Entranced”), it’s devastating (and even there, the pestilential guitar work is notable). And there’s also a sharp change of pace and style in the outro track “Immemorial Dream” that’s a huge and beautiful surprise.

It really is a remarkable album — and it may not be Disincarnate’s last one. In various interviews given over the years, Murphy has talked about his intention to revive Disincarnate. The most recent interview I found is this long and wide-ranging one from last year, in which Murphy suggests that a new album may not be far off.

10 Responses to “THE REARVIEW MIRROR (DISINCARNATE)”