Felicitously, I discovered quotations from others about this new EP by the Texas band Oil Spill that seemed quite fitting, and they had the side benefit of saving me a bit of work in coming up with my own verbiage. These two are from commenters on the EP’s Bandcamp page: 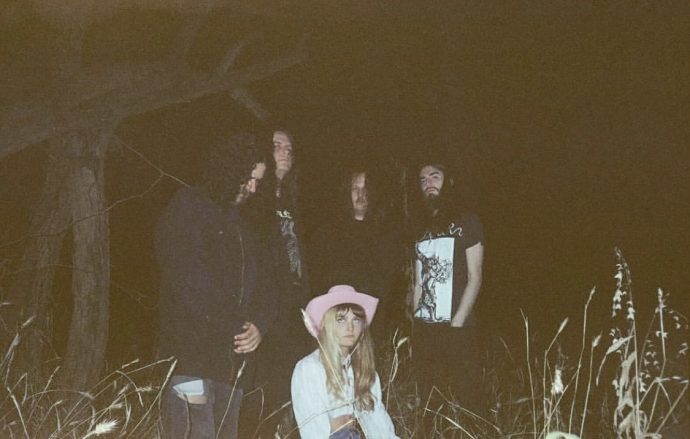 “Dirty Texas BM that unites buttoned-up Kralliceheads and unwashed gutterpunks alike. Each track blends the bass-heavy sludge/doom of bands like Hell and Primitive Man with the swirling, high-concept BM of Yellow Eyes and Krallice. The sludgy bits are the thick, sweet molasses base to the BM bits, which are a bit like snakes being puréed alive in a blender.”

I’ll add this comment from Rennie (starkweather), who recommended the EP to me (and was comparing it to something else he recommended, which I intend to write about later): “This one is rawer, and pardon the pun, more crude – guitars are similar to Primeval Well in a sense they are an odd register. Song arrangements aren’t as amorphous and nebulous as the tech act above, but, they use a lot of riffs to keep a listener on their toes”.

I second all of these comments, and will add these: The screams are scorching; the monstrous distorted roars are skin-shivering; the shrill leads are sheer lunacy; the bass action is also crazed but very inviting; and the clattering snare progressions are attention-grabbing. Oil Spill often throw themselves around with wild, head-spinning abandon, but when they exercise some restraint, they effectively create sensations of oppressive grandeur, spectral eeriness, and narcotic queasiness. An ingeniously inventive trip into hellish realms… and one that really will keep you on your toes.

The EP is Ashlands, released on April 3 (digital and cassette tape).

I paired this next song with the first one because it too is crazed, and in part because it too features an attention-grabbing bass performance. But really, all the performers seize attention, from the freakishly swirling and rapidly darting fretwork to the amalgam of mad vocals and the highly variable drumwork, which veers sharply in a multitude of directions but is always locked-in. The lyric video is kind of amazing too.

The album this song comes from is A Blunt Description of Something Obscene (what a great title). It will be released on May 19th by Lacerated Enemy.

The old gods return. If you can’t get into these uber-murderous lyrics, then we may have to revoke your death metal credentials. You can read them in the video, but Henrik Andersson’s enunciation is so good that you can probably comprehend them anyway, despite how raw and barbaric his voice sounds. And the band behind him do what they do best — maul and maraud, gallop and gouge, and discharge some damned contagious riffs.

Taken from Centinex’s album Death In Pieces, out on May 29th on Agonia Records.

It’s commonplace to say that rapid-fire snare attacks sound like machine-guns. But the snare-drum performance in this next song REALLY sounds like a machine-gun. Lots of other things about the song resemble modern armaments being wielded in manic and uber-brutal fashion. The full-throttle, rampaging and jackhammering sensations of the music get a contrasting element when a dismal and diseased lead slowly slithers through the machine-precise mayhem. By contrast with the last song, you can’t make out the words of this one quite as well (or at all) without the lyrics in the video, but the vocals are so disgusting and unhinged that who cares?

“Eyes Of Abzu” is drawn from Devangelic’s new album Ersetu, coming on May 15th from Willowtip Records.

Jeramie Kling (Venom Inc., Massacre, The Absence) and Taylor Nordberg (Massacre, The Absence) have been hard at work in the studio at their own Smoke & Mirrors Productions in Spring Hill, Florida. Their goal was to write, record, mix, and release a song in the space of a single day. Add once they’d done that, they kept doing it.

I stumbled across this project on Day 12 — which turned out to be the final day of this series — when the focus was Bay Area Thrash. On this track, Kling and Nordberg were joined by Brian Stephenson (Old James, Skull Fist) (vocals/lyrics), Noah Martin (Arsis) (bass), and Kragen Lum (Heathen, Exodus) (guitar solo). Good stuff, and you can find this one and all the other songs here:

Here’s another example of talented people not letting the virus choke off their creative energies. In recent days Fabio Brienza of the Chicago band Varaha collaborated with videographer David Leep to make a video called “Karantinas” that combines music from Varaha’s song “Disbelief” (from their wonderful album A Passage for Lost Years, reviewed here) with David Leep‘s drone footage of a Chicago transformed by the efforts to combat Covid-19. In addition, both David and Fabio appeared in a segment aired yesterday by Chicago’s NBC television channel that previewed the film and interviewed the artists. Fabio made the message plain in his interview:

“Despite the suffering, beautiful things are happening and are still possible. I believe that now more than ever, the creatives have the ability to facilitate bonding between people. And it is our responsibility to deliver.”

Both the NBC feature and the “Karantinas” video are below. The haunting scenes of this once bustling city rendered barren do indeed evoke a feeling of disbelief, and of sorrow — and thus the choice of that particular Varaha song made perfect sense. The combination of sights and sounds makes a powerful impact, and a vivid representation of the strange times we now live in.

Now we’ll switch gears into the next pair. The first song, which premiered at Deaf Forever, is “Wär nicht Traubhagel” by the German band Horn. The song’s opening, led by brass instruments, may come as a surprise if you’re not familiar with Horn‘s interesting musical proclivities. What comes after that is a guaranteed head-mover, but the swaying and swirling melodies in this mid-paced piece are also completely (and often gloriously) bewitching, though the timbre of the harsh vocals and the bursts of blasting still tether the song to black metal. Especially when Horn‘s clean vocals appear near the end, the music seems to transport us into a folkloric dance of a different time.

The song is from Horn’s multi-faceted new album Mohngang, which will be released by Iron Bonehead on May 15th.

Like the last song, “Whore To War” is a guaranteed head-mover too, but of the kind whose bruising and battering intensity threatens skull trauma. There are other aspects of the song that made me think it would be a fine companion to that Horn song — the scintillating leads also made me think of a dance, and the harsh vocals are pleasingly savage. The song does eventually shift gears, becoming wilder and more unchained, pulsating with vibrant energy and delivering more extravagant drum athleticism, but the band don’t ever really let go of your neck, so loosen up.

The song is off the new album Slaver by this Australian band, whose line-up includes members of Mournful Congregation and Stargazer. The album will be released by 20 Buck Spin on May 22nd.

This next video (which should perhaps be accompanied by a warning to epileptics) begins the final pairing for this large round-up. As my friend Andy Synn remarked, “Filth for the eyes and the ears”. The disturbing imagery was compiled by Jakub Moth. The disturbing music (“Santa Muerte“)  was made by Lord Mantis, and appears on their latest album Universal Death Church (reviewed here). This comment from vocalist Charlie Fell appears along with the video:

“The concept for the video comes directly form the lyrics which were based on an experience hanging out in the Kensington badlands’ and seeing a dude come up after being hit with narcane. He came out clawing the air and screaming he looked as if he just came back from a trip to hell. I had seen this type of thing before but this was different; the way he came out scratching at the air in pain convulsing and hollering about the cold inside him. This was happening all over Kensington at the time due to a batch of fentanyl called ‘Santa Muerte’ and in no way am I trying to glorify the use of these drugs, they truly are a curse. But this all happened at a time when I was reading a lot of Manly P. Hall and other esoteric writings and started to think a lot on the idea of evil, curses and magic just all these ancient concepts that we have dismissed through the years and put under the banner of science to take the intention behind them out of the picture.”

The final item in this giant round-up is Grand Design of the Apocalypse, a recently released EP by the Finnish black/death band The Lifted Veil, and I’m including a video for one of the three songs, which may explain why I’ve paired this with that Lord Mantis video and song above.

The last time I wrote about the band was three and a half years ago, and the occasion was a review of their debut EP, The Wicked Shall Inherit the Earth. I wrote:

“There are few albums I’ve heard this year that are as effective as this one in channeling blood fury and an orgiastic desire to slaughter and maim. At times it’s like an unholy union of Anaal Nathrakh and Aborted. The vocals alone, which range across a wide variety of bestial sounds, are off the charts.”

But I also wrote that “as maniacally destructive as the music is, the band have built in so many dynamic twists and turns and undercurrents of diseased melody that the EP leaves you electrified rather than exhausted. Hugely impressive!”

This new second EP begins in electrifying fashion, thanks to a drum overture that launches the opening track, “The Sanctums of Disease”. The drumming remains magnetic, and the riffs are magnetic too, even as the music morphs among different phases of swarming and slaughtering mayhem, accented by delirious and exotic lead-guitar extravagance and full-bore vocal hostility.

The music has a well-defined rhythmic pulse (or rather, many of them), as well as morbid and melancholy melodic accents that make an impression. There are also times when the music becomes disturbingly majestic, with the chords ringing out in grand yet nightmarish fanfares. While it’s clear that The Lifted Veil haven’t forgotten how to rip, tear, pound, and mutilate, these songs are more multi-faceted and more intriguingly constructed than what I remember from their hellishly good debut. Welcome back!