Felicitously, I discovered quotations from others about this new EP by the Texas band Oil Spill that seemed quite fitting, and they had the side benefit of saving me a bit of work in coming up with my own verbiage. These two are from commenters on the EP’s Bandcamp page: END_OF_DOCUMENT_TOKEN_TO_BE_REPLACED

(On November 22nd Profound Lore will release a new album by Lord Mantis, and today we share with you Todd Manning‘s review.)

It’s the return of the filth, courtesy of Lord Mantis. These people have been absent for five long years, but they are ready to reopen festering wounds with their new full-length, Universal Death Church, out November 22nd on Profound Lore Records.

At one point this entity appeared to be dead, but the group decided to rebuild burnt bridges in order to honor the memory of drummer and founding member Bill Bumgardner. Universal Death Church is an immense statement by the reformed line-up, a sprawling testament to chaos and sadism, done as only Lord Mantis knows how to do. END_OF_DOCUMENT_TOKEN_TO_BE_REPLACED 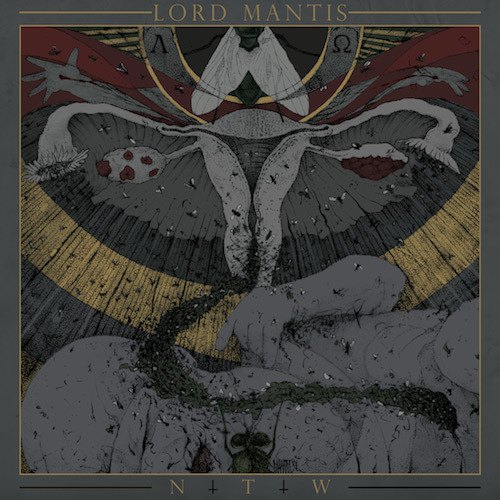 Here at NCS we really try our best to stay out of all the inter- and intra- band drama that goes on within the metal scene, and that goes double when we’re friendly/familiar with some of the parties involved.

Still, I have to acknowledge that it’s practically impossible to talk about the new Lord Mantis EP without addressing the acrimonious, and very public, split that occurred in the band’s ranks not long after the release of 2014’s phenomenal Death Mask, with both Charlie Fell and Ken Sorceron decisively cutting ties with the group, even as drummer Bill Baumgardner and guitarist Andrew Markuszewski vowed to continue on without them.

As a result of this division, lines were drawn, sides were chosen, old alliances torn asunder… with fans on both sides of the divide pulled (willingly or otherwise) into one very un-civil war.

But, despite all this, the one question which matters more than any other is… how does the music on Nice Teeth Whore stack up to the band’s previous releases? END_OF_DOCUMENT_TOKEN_TO_BE_REPLACED

Here we have Part 8 of our continuing list of 2014′s Most Infectious Extreme Metal Songs. For more details about what this list is all about and how it was compiled, read the introductory post via this link. For the other songs we’ve previously named to the list, go here.

Since this is the last day of the year, it seems like a good time to take stock of our progress on this list. Only problem is, I have no fuckin’ idea where we are. After today I’ll have rolled out 17 songs, but I don’t know whether we’re halfway through or a third of the way or only a quarter deep. So let’s just keep going, shall we?

In a word, the latest album by Germany’s Infestus — The Reflecting Void — was (and is) stunning. Andy Synn concluded his review of the album with these words:

““The beautiful, unforgettable cover art embodies the album so well – this is music from the darkest depths of the human mind, a black, malignant tumour of pain and anguish which spreads its tendrils widely to encompass a host of dark emotions and warped musical influences, creating a truly immersive, unforgettable experience.” END_OF_DOCUMENT_TOKEN_TO_BE_REPLACED

You’d think the mighty Behemoth would have done a live video before now, but this new one for “Ora Pro Nobis Lucifer” off The Satanist turns out to be their first ever. The video, which was filmed by Grupa 13, is really, really well done. Of course, the song is a blasphemous killer. END_OF_DOCUMENT_TOKEN_TO_BE_REPLACED

In some quarters, Jef Whitehead’s cover to the new album (Death Mask) by Chicago’s Lord Mantis has stirred up controversy — including in the comment thread to our own review of the album, where the band’s Charlie Fell joined the conversation to provide his own response to the controversy. Of course, controversy and metal aren’t strangers. In fact, one might argue that controversy is at the heart of metal. In fact, one might go further and argue that metal really doesn’t give a shit (and shouldn’t give a shit) about social agendas, political issues, or trying to move society in one direction or another.

That seems to be the general point of a short but potent piece by our fellow blogger Full Metal Attorney that appeared yesterday. In that piece, with the title “Metal Doesn’t Give A Shit”, he uses the controversy over Whitehead’s cover as a jumping-off point for an opinion piece in which he responds to the claim that metal should become “a truly counter-cultural resistance against mainstream society” — and I quote in part below:

“No, I’m sorry. Metal doesn’t care. Metal is horror films, snuff films, shock jocks, and pulp in music form. It has no higher purpose, and no social agenda.

Metal isn’t left. It isn’t right. It’s up yours. Dee Snider didn’t dress up like a woman because he was “ahead of his time” on queer issues, he did it to piss people off. END_OF_DOCUMENT_TOKEN_TO_BE_REPLACED

We already reviewed Death Mask. We’ve heard it all, but most of you haven’t. Some of you will want to run away from it, some of you will eat it up like whatever it is you can’t stop eating even when you know you should. I’m in the latter category — it has made an indelible mark, as deep as all the black tattoos that beautify my limbs. END_OF_DOCUMENT_TOKEN_TO_BE_REPLACED

(Yesterday we posted BadWolf’s review of Lord Mantis’ forthcoming album, Death Mask. The review led to some interesting exchanges in the Comment section, most of which revolved around the album’s controversial cover art by Jef Whitehead. BadWolf now follows up with this post.)

Here at NCS, we are blessed with a great stable of readers and commentators. For the most part, you guys respond with decorum and thoughtfulness, even when we cover transgressive and confrontative music, like the kind we covered yesterday in my review of Lord Mantis’ new album, Death Mask. That album features a striking piece of cover art, which some people have claimed is transphobic, or otherwise vile toward transgendered persons. That artwork was produced by another controversial member of the metal community, Jef Whitehead of Leviathan, among other projects.

In that thread, Charlie Fell, bassist and vocalist in Lord Mantis, spoke up. And he had this to say:

“The art work wasn’t meant to offend it was made to be a portrait of myself destructiveness as well as my minds eye view of my humanity and sexuality. The last album also featured a transgendered Christ on it and its been a theme in our cover art through out the bands existence. Im not always the best with words and come off a bit crass and insensitive to some people but I have no problems or prejudices with any race, gender (cis, trans or otherwise) or sexual orientation. END_OF_DOCUMENT_TOKEN_TO_BE_REPLACED

There is something deeply wrong with the minds and hearts of Charlie Fell, Andrew Markuszewski, Bill Bumgardner, and Ken Sorceron, who together form Lord Mantis. I’m not sure how we didn’t know before—each of these musicians has made waves in the underground for quite some time as members of Nachtmystium, Avichi, Indian, and Abigail Williams, among other bands. But there’s just something deeply upsetting about the music they make together as Lord Mantis on their new album, Death Mask.

At this point, people probably know the Chicago-based black-sludge outfit best for their filthy taste in cover art. 2012’s critically-acclaimed album Pervertor featured a limbless, vaginal Jesus being gang-penetrated by some Lovecraftian tongue beasties. Death Mask might be even worse, sporting a sickly-green big-bushed hermaphrodite sewing a death mask (get it?) onto his/her own face. The image has already stirred some controversy (see this and this). For my money, I feel the artwork has about as much artistic depth of content as Lady Gaga getting covered in vomit. As a PR move, however, it’s adept, since Death Mask is such an inaccessible album that it requires some sort of outside hook to get listeners interested.

I have no idea what they’re putting in the waters of Lake Michigan, but it seems like this year has marked release after release of well and truly unsettling music, including Catharsis Absolute by Avichi (a solo project by Markuszewski), and From All Purity by Indian. Death Mask might be the best record of the bunch—it’s the one I’ve revisited most, at least, and it probably has the most hooks. But make no mistake, this is a difficult album to listen to. Almost the whole of the record comes coated in distortion and noise—industrial effects pepper the background, while several digital filters mask the blackened shriek vocals that populate Death Mask. END_OF_DOCUMENT_TOKEN_TO_BE_REPLACED