Five years after Death Mask, Lord Mantis has revived and recorded a new album named Universal Death Church. The line-up this time consisted of a reunion of vocalist/bassist Charlie Fell and guitarist/vocalist Andrew Markuszewski, joined again by guitarist Ken Sorceron of Abigail Williams, and by new drummer Bryce Butler in place of the late Bill Bumgardner.

The album also features synth work by Sanford Parker (who produced the record), an appearance on three tracks by honorary vocalist/member Dylan O’Toole of Indian, and guest appearances by Dallas Thomas of Pelican and Bruce Lamont of Yakuza.

So far, two songs have been revealed. The latest one, “Qliphotic Alpha“, is mean and merciless, primordial in its physical compulsiveness, and crazed in its discordance. It fuses bleak hammering riffage with a heavy-pulsed bass and neck-snapping snare beats. The dissonant blaring leads create a queasy and demented feeling, and the screamed vocals are scorching.

The song comes to a dead stop well before it ends, and when it resumes, in a more crawling cadence, the mood is more desolate, the gleaming guitar notes more despairing, the vocals even more unhinged — but the music also becomes mystical and mesmerizing as the energy builds back to the propulsive hammering with which it began.

The previously released track, “Damocles Falls“, reveals some of the same ingredients — spine-shaking bass, skull-splintering snare rhythms, incinerating vocals, and an air of incipient madness. Yet there’s also grandeur in the blaring melodies, as well as some spooky singing. The song has a massive physical impact, heavy and groovesome enough to bend you at the waist in body-wracking movement, until it crescendos in a calamity of feverish, hard-hitting sound.

Universal Death Church will be released on November 22 by Profound Lore. The great cover art was created by Venien.

In addition to a second track from the new Lord Mantis album, last week also brought a second one from the new Abigail Williams album (Walk Beyond the Dark), through a premiere at Kerrang (which includes a discussion with AW‘s main man Ken Sorceron).

The track revealed last week, “Ever So Bold“, includes a guest solo by Justin McKinney (The Zenith Passage, ex-The Faceless), which is terrific. Everything else about the song is also tremendous. It has an overpowering sound, and a grand, sweeping quality in its melodies. The music often seems to arc gloriously upward, yet the leads channel weariness and pain, wistfulness and regret. It’s an emotionally intense, rhythmically dynamic song, a charismatic hybrid of highs and lows, with intense vocals to go along with the soul-spearing melodies.

Walk Beyond the Dark will be released by Blood Music on November 15th, with a vinyl release projected for December 13th. If you couldn’t guess, the cover art is a painting by Mariusz Lewandowski.

This week’s meeting of the Greg Mackintosh Fan Club (NCS Branch) is hereby called to order. The first order of business is for you deadbeat NCS staff members to get your dues payments up to date. This is the last time I’m paying for the cookies and milk out of my own pocket. Our club house is also starting to stink, and I shower regularly, so you bastards need to get your bathing up to date too.

Second order of business is the new Strigoi track, “Nocturnal Vermin“, which was obviously written with our fan club members in mind. This is another winner from the new Strigoi album, Abandon All Faith, which Greg recorded with the aid of Extreme Noise Terror and Vallenfyre bassist Chris Casket, and session drummer Waltteri Väyrynen. It makes a great follow-on to the first single, “Phantoms“, which as you know was also great.

You may feel the ground quake beneath your feet at first, and then the song will run you into the ground. The guitar tone is massive, the drumming is off the hook when the track is in high gear, and it will pound you to smithereens at the end. Just what you deserve.

Abandon All Faith, will be released by Nuclear Blast on November 22nd.

Man, the stench in here is getting to me, so… MEETING ADJOURNED. 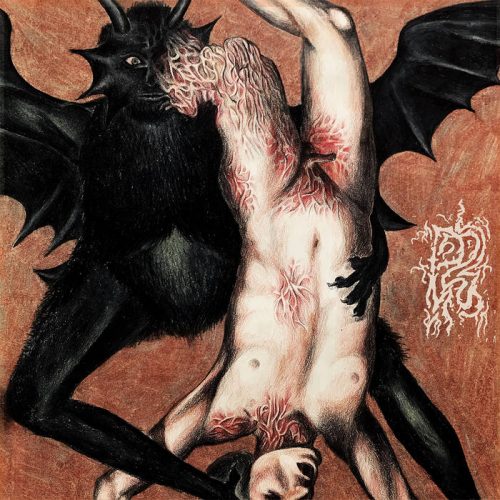 This last song was a late addition, and credit for that goes to Rennie (starkweather), who overcame Facebook’s community-standards ban on the Bandcamp link he tried to send me by finding a Soundcloud link. Hard to know what part of the cover art offended the FB overlords. Also hard to know how you train an algorithm to spot a bloody penis or an imminent decapitation.

Anyway, the song in question, “Abreactive Trance“, is absolutely punishing — and damned good. It’s off Tellurian Insurgency, a new EP by the genre-bending Australian band Ploughshare, which will be out on November 29th via I, Voidhanger Records. I’m taking the liberty of sharing Rennie’s impressions first:

“After the wash of electronics comes a very Morbid Angel attack with its gurgling, sludgy guitar tone and dynamics… though the vocal attack is very Gorguts-Obscura, as are some of the slower moments and noisier chords”.

That wash of electronics, coupled with monstrous roaring voices, is scary stuff, and then the song comes for your throat, all battering drums, cyclonic riffing, and wild screams, before eerie, dissonant notes and sludgy, mind-gouging chords put the serious frighteners on you. There’s a warped, yowling quality to the guitars, and pile-driving brutishness in the percussive hammering. Chaos reigns in the war-zone-like frenzies, and the song also becomes apocalyptically oppressive near the end.

I’d wish you sweet dreams after you hear this, but I’ve wished for world peace, too, and you see how much good that does.