The path Centinex have charted since their return in 2014 has been an interesting one, if not one of the more uncompromising returns out there. They’re a band who are meant to be taken at face value, a death metal group playing the most stubborn version of it that they can, and benefiting from a renewed interest in that particular sound right around the time they came back.

The band exists partially as the other side of a death metal coin for bassist Martin Schulman (and at this point basically the last one standing of the earliest formations of the band) with the other half being a more modern-oriented death metal group with former Centinex members in the form of Demonical. 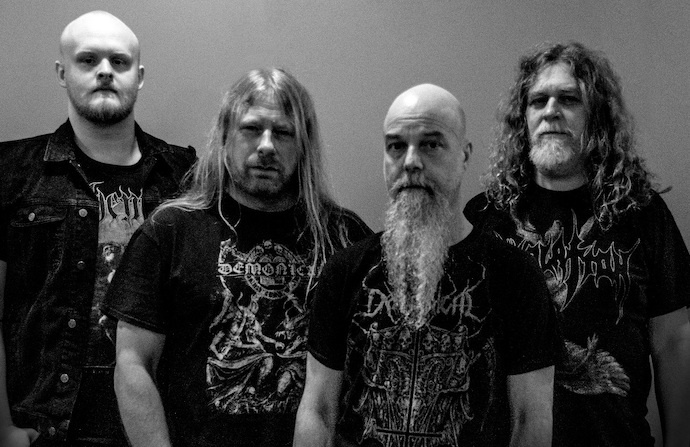 The re-formed lineup of Centinex hammered out two enjoyable discs in 2014’s Redeeming Filth and 2016’s Doomsday Rituals, but the four years in between the latter album and the group’s newest disc Death In Pieces – released May 29th via Agonia Records – saw some serious lineup changes for the band, with Martin Schulman surrounding himself with an entirely new group of seasoned death metal veterans – and as of this year a new drummer. If Centinex were going to be the old school flavored death metal band, then the lineup had shifted to subtly reflect that, and as a result Death In Pieces feels like a soft reset of the band. You wouldn’t know it from the initial blast musically, but each of the ten songs on ∫i is almost dogged in its determination represent the caveman-hitting-rocks style of death metal that has long been Centinex’s trade.

Knowing what you’re in for with Centinex can transform a listening session of Death In Pieces into a musical anthropology exercise. As mentioned above, that ‘face value’ effect of what Centinex does means that the sense of familiarity with the band is almost instantaneous. You’ll recognize all sorts of death metal hallmarks from moment one and you’ll be able to grasp the musical blueprint they follow with at a similar speed.

Thus, in recognizing the red-meat nature of Death In Pieces, listening to it is more an exploration of how effective the band are with each building block and, frankly, just how much mileage one can get out of thirty-two minutes of chainsaw guitar. The most immediately noticeable addition to the band is new vocalist Henrik Andersson, who’s rougher on the voice and with a harsher-sounding approach that’s very different than that of the aggressive and upfront lows of his predecessor.

With partially a bellow and partially a mid-range yell, Henrik actually comes through the hammered music behind him clearly. It’s not too often you’d think that you might be able to make it through a death metal song and pick up the lyrics without a booklet, yet a trip through the death-obsessed subject matter of Centinex’s latest might have you thinking otherwise. It’s not poetry – closer “Skin Turning Grey”, for instance, is like an unintentional spiritual sequel to “Moist Purple Skin” from Redeeming Filth – and for the most part is written to match the percussive nature of the music. If a song like “God Ends Here” is thundering along and almost purpose-built for a massive circle-pit, so too is the vocal work.

Every recent Centinex album feels like an exercise in dispensing with bullshit, and Death In Pieces is no different in that regard. The most pretentious you could accuse Centinex of getting on the album is that they wrote a song that functionally serves as an intro for the one that follows. “Pieces” is nearly two minutes of a chugging riffing, as dumb as it could get, which serves as a true lead-in to the much faster and punchier “Cauterized”.

Otherwise, Death In Pieces is an album that dwells in the “variations on a theme” section of music. The first three songs lay out the foundation and every song afterwards is constructed out of the same materials. There’s a healthy amount of mid-tempo stompers making up the track listing, hand-in-hand with the songs for which the chainsaw-guitar riffing is meant to be the fuel for many a headbanging session, but the band rarely go for a hyperspeed assault. Centinex prefer the classic sewer-monster approach to death metal, and Death In Pieces only serves to further reinforce that notion. 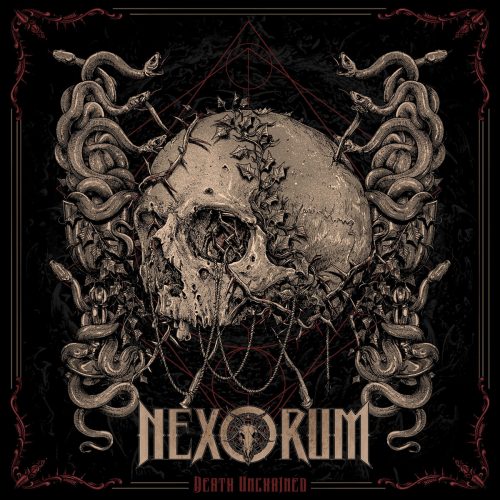 Given the infinite spirals, wheels-within-wheels, turtles all the way down, style of musical exploration that this site often uses to find groups to listen and look into, and the way we love to dive deeper and deeper into various artists and projects and how they all connect to each other, I’m honestly surprised we haven’t taken much time to focus on Norway’s Nexorum and their March full-length album Death Unchained – especially when the lineup counts Keep Of Kallesin and Khonsu musicians in its lineup.

Nexorum are a new project, formed last year, who released their first single (the lead song on Death Unchained) – in October of that year.  February would see the release of a second single, just ahead of the full disc, and now we have Death Unchained as a whole, a low rumbler of a death metal disc, heavily oriented around neck-snapping grooves and vocalist Terje Olsen‘s yells. Nexorum move with big, imperial guitar riffs, and even though every song on Death Unchained stays in a pretty neat three-to-four-and-a-half-minute range, the band still sound gigantic. All the more fitting for this latest collection of testaments dedicated to the abyss and the dwellers therein.

Nexorum tap into a very rich vein of blackened-death metal ore early on within Death Unchained and then continue to mine from it throughout its forty minutes. You’ll pick up on it from the first few segments of “Saligia Moralis Codice”, how the band use the humongous riffs to create an oppressive atmosphere and the sense that they’re a big, lumbering monster, how the bass guitar is not only brought forward in the group’s sound but also highlighted very early on within the aforementioned song, and how all of those elements work in concert with one another to form Nexorum’s sound. 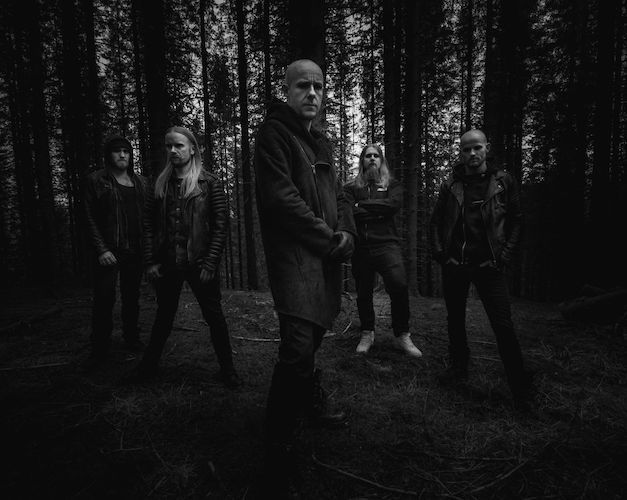 The band don’t steer too far from that initial demonstration of might throughout Death Unchained, and instead use the elements to craft music befitting their skull-and-snakes artwork for the album. “Great Horned King” is a little more blatant on the groove front in its opening segment before the group commence what is otherwise a gnarly bit of sonic annihilation (and one of the times when drummer Vidar Lehmann has the opportunity to absolutely dominate a song. Parts of “Great Horned King” sound like they’re meant to hang on with all their might to keep up with whatever is happening behind the kit vs the usual ‘have drummer serve as backbone’ approach.

While most of Death Unchained is happy to bulldoze its listener, album closer “Murderer” is one of the rare occasions where Nexorum embrace the meat-headed side of their genre. Most of Death Unchained is a whirling vortex of sound in comparison to “Murderer”, a song defined by one gigantic guitar riff that is all weight and rumbling chug. It’s not even the longest song on Death Unchained either. It falls short by eight seconds to the massive “Cataclysmic Rebirth” – a song which is a brother in the slow lumbering movement department up until the halfway mark, where it shifts into full head-spinning torment mode to close things out. Coupled with album highlight “Antediluvian Purification” before it, you have a damned solid middle section of Death Unchained.

Death Unchained is one of the most evenly spread-out albums I’ve heard in a while. Most discs tend to favor frontloading their highlights and then tailing off from there, but Death Unchained keeps finding ways to hold a listener’s attention throughout its ten songs. The first three are so vastly different from one another that they basically serve as a demo reel for every element that Nexorum use in constructing their music. After that it seems like every other song has some way to grab hold of you and shake you around for a bit, with that aforementioned lumbering-beast style of songwriting helping a ton in that regard. It isn’t a friendly release but those looking for a molten slab of blackened-death may find themselves served well by Death Unchained.