From the first seconds of the first song on Cursed Redeemer, Sweden’s Miasmal rip the door open on a death metal blast furnace, and the conflagration doesn’t diminish (much) from then until the album’s final notes. It’s an adrenaline rush that also happens to be adroitly composed and performed with top-shelf skill, and we’re damned happy to bring you a stream of the whole scorching thing, right here, right now, on the day before its US release.

Miasmal (who include two members of the excellent Agrimonia) call Gothenburg home, but don’t be fooled by the geography: This isn’t melodic death metal (though the songs do include a slew of memorable melodic hooks), and it’s not predominantly gore-drenched or doom-driven death metal either.

If you’re familiar with the history of death metal in Sweden, then you know that it was influenced in its early development more by punk and d-beat hardcore than the scene in the U.S., and that comes through loud and clear in Cursed Redeemer. But these dudes also know how to kick out some mighty galvanizing thrash licks, too. And they also deliver blunt-force trauma with convincing enthusiasm. 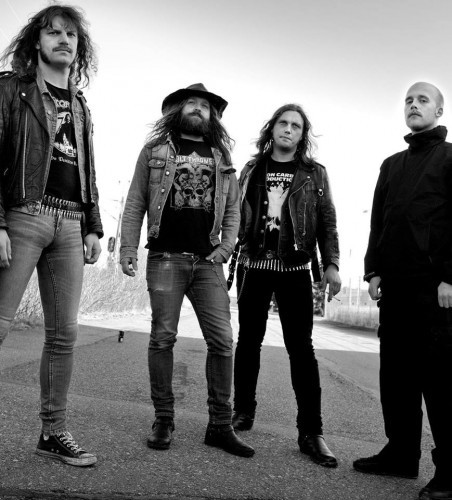 Miasmal pride themselves on delivering no-bullshit, no frills extremity with a DIY rock ‘n’ roll ethos, but even though the band don’t put much stock in showing off,  their instrumental chops still shine through. The flash-fired riffs are meaty and golden, the drum work drives like pistons firing on all cylinders, and the guitar solos are downright searing.

Frontman (and co-guitarist) Pontus Redig (who’s also in Agrimonia and Martyrdöd) also brings great emotional range to his vocal performance. It ranges from “really pissed off” to “I want to brain you with a brick and then gut your whole family with a carving knife”. You may think I’m exaggerating, but you’ll see. His high-range howls hold nothing back. There was obviously a microphone somewhere close when the vocals were recorded, but he sounds every bit like a caged animal thoroughly focused on trying to rip through the bars.

The songwriting may not go in for the graveyard horrors of many other death metal bands, but the atmosphere is undeniably evil and voracious. And when Miasmal do ease up on the gas pedal (which they do at just the right moments to keep you riveted in place), they generate a poisonous… miasma.

All in all, Cursed Redeemer is one of 2014’s death metal highlights. It’s out now in Europe and will be released in the US on May 13; it’s available for pre-order from CM Distro here. You can (and should) connect with Miasmal on Facebook via this link.

And finally, my words are at an end…. Hear for yourself what’s got me so stoked:

13 Responses to “AN NCS PREMIERE: A FULL ALBUM STREAM OF MIASMAL’S “CURSED REDEEMER””