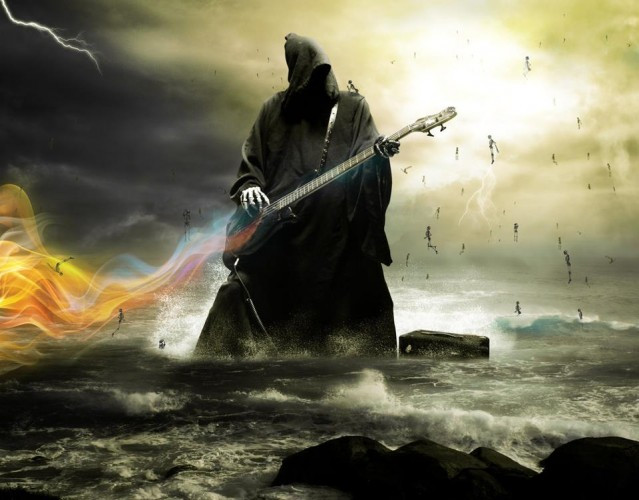 There’s been a lot of chat recently (actually, I suppose it’s a pretty constant state of affairs) about what is or, more frequently, what isn’t Metal. In fact you’d be hard-pressed to go very long at all in this scene without encountering someone willing to tell you how you’re “doing Metal wrong”, and happy to lay out a list of all the Heavy Metal Commandments which a good metalhead should adhere to.

And yet, somehow the irony of this goes right over their heads. The same people who preach the inviolable laws of “Metal” (which, strangely enough, always seem to apply solely to the things they do and the bands they like), are the same people who harp on about the evils of religion and blind faith. Whether it’s willful denial or simple ignorance, I don’t know, but it’s absolutely mind-boggling to me.

You see, not to be too blunt and simplistic about it, Heavy Metal is, at its heart, just a musical genre. And quite a varied one at that. But still, a defined genre. One based around loud, distorted guitars, hammering drums and (ideally) a palpable sense of passion and fire.

In fact, certain people particularly don’t like it when you start to question what Metal is…

Metal deals with darker subject matter than a lot of genres… that’s a common enough claim, although it’s not entirely unique in that regard by any means. In many that’s right and valid though. It should do that. It should address issues and ideas that other genres don’t. That’s one way it sets itself apart and defines itself. The minor-key melodies and ominous riffs of the Metal genre often provide the perfect context in which to explore the darker side of life, something which shouldn’t be ignored.

Heck, I want my bands to deal with darker and serious subject matter (well, except when I want something else from them, of course), but dealing with it… exploring it… discussing it… doesn’t give you the inalienable right to be an asshole yourself. From somewhere this idea took root that being “Metal” – whatever the hell that means in this ill-defined context – gives you carte blanche to act in whatever way you want, to say whatever you want, without fear of consequences or criticism.

There’s a reactionary part of the Metal community which holds fast to this idea, and to the idea that Metal should always be challenging the status quo. And, in many ways, that makes sense. Yet what happens when the status quo starts to improve? What happens when the world does start to get better, fairer, smarter… does Metal have to get worse, less tolerant, and dumber, in response?

That’s the problem with attributing such inflexible rules to an amorphous concept as “Metal” – it invites paradox and contradiction.

Indeed, trying to pin down exactly what Metal is, what makes it unique and singular and sets it apart from other genres of music – beyond the very vague definition of the genre stated above — quickly becomes an exercise in futility and constant contradiction if you’re not careful. For every claim made by one person, there’s always a counter-example available.

Some Manowar fans are often all-too keen to dictate what is or isn’t “true” to the spirit of Heavy Metal. Although exactly what this “spirit” is no-one ever seems entirely certain. Lots of Death Metal fans will tell you how there’s no room for melody in the genre… despite the fact that bands like Judas Priest, Black Sabbath, and Iron Maiden are the acknowledged “gods” of Heavy Metal.

Heck, even this very website is named “NoCleanSinging” after the idea that there’s no room for clean vocals (at least, of the poppy variety) in the Metal we cover here.

Some people claim that Metal is a liberal genre… yet there are endless examples of Metal bands and Metal fans who hold conservative viewpoints. Heck, even the supposed “liberal” values of certain bands and fans only extend so far until they’re threatened by progress and unforeseen changes.

Some people claim Metal shouldn’t be political, that it shouldn’t deal with serious social issues… and just as many people only want Metal that deals with those issues.

Some people claim that Metal is about progression. It’s a genre that doesn’t stand still. Yet also that it should hold tightly to tradition and not allow itself to change.

And, of course, just as many people hold that the only constant in Metal is change. That it needs to keep transforming and progressing, growing more extreme and pushing the boundaries, or else it will grow safe and stale.

It’s everything. And nothing.

Ultimately, it’s us. All of us.

But it doesn’t, or shouldn’t, define us.

This doesn’t mean that we’re somehow special, or a “chosen people” (I’ve seen variants on this argument pop up far too often for my liking). Metal fans – that’s you, me, and even people who inexplicably like The Monolith Deathcult — exist on a bell-curve, just like any other grouping of people. Get enough of us together and we’ll even out in pretty much the same way as everybody else. Sure, there’ll be certain trends, and here and there we’ll probably skew slightly differently than fans of other genres in certain areas, but ultimately, we’re all just people.

I’ve heard it said that it’s not “Metal” to care about other people, or to care what they think, or to take other people into consideration… or to otherwise act like a decent human being. And when you look at that in context, well, it’s a pretty ridiculous statement.

The only people who don’t really care what other people think are out-and-out psychopaths. This myth of the self-reliant, utterly individual, totally cool and relentlessly rebellious metalhead is just that… a myth… one that falls apart when you confront the simple reality that all of us… all of us… are interlinked and inter-related in the world we live in.

You see this thing that we call “Metal” does not exist in a vacuum, despite what some people want to believe. It wasn’t formed in isolation, and it doesn’t have its own independent form of existence. It’s made by, made up of, and made for people – people of all different types, who all make up part of a bigger society. And it’s ludicrous to ignore that.

That’s why it’s so hard to precisely define the genre past its key musical ingredients. It’s why people struggle so hard to specify one thing that is metal, yet can always find something that isn’t.

Because Metal, as a musical genre, is in a constant state of flux.

Trends come and go. People change. Society develops and grows. And Metal, like so much else in life, continues to reflect that.

Ultimately “Metal” is whatever we want it to be. It’s what we make of it. And because of that it will never truly die. Not as long as there are people who want to create, build, and express themselves honestly, with this thing that we call “Metal” as their medium.