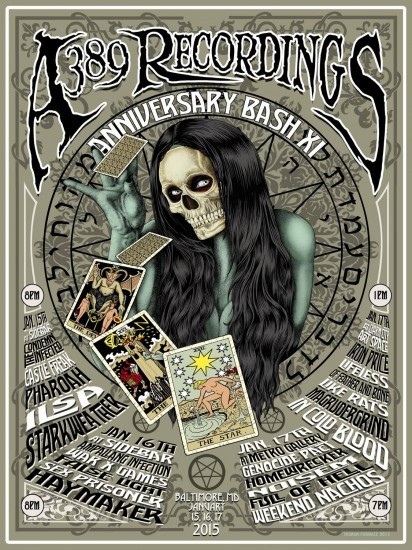 Baltimore-based A389 Recordings is hosting a music festival on January 15-17, 2015, to commemorate its 11th anniversary. The show will take place at three Baltimore venues (Sidebar Tavern, CCAS, and Metro Gallery) and will feature performances by 20 bands. The awesome poster for this year’s festival (above) was created by Human Furnace of Ringworm.

To help promote the festival and to salve the wounds of those who will be unable to attend, A389 has made available a free digital compilation called the A389 MMXI Anniversary Bash Soundtrack with songs from all the bands who will be performing at the festival. The soundtrack includes brand new tracks by Ilsa and Genocide Pact, as well as music from Noisem, Full of Hell, Magrudergrind, In Cold Blood, Weekend Nachos, and many more.

Ilsa have always been reliable purveyors of music designed to cause spinal compression fractures, and their new song “Oubliette” is no exception. It’s a bone-breaking crusher that starts slowly and then ramps up into something resembling a steamroller on steroids. With jugular-bursting vocals and enough riff distortion to set off Geiger counters, it will tear you down — but the finish is guaranteed to get your head bobbing right before it comes clean off.

The new Genocide Pact track, “Desecration”, is also a heavy motherfucker, loaded with hard-jabbing riffs, knee-capping percussive strikes, and neck-snapping groove, with lyrics voiced in a hollow roar and a breakdown that’s a sure-fire mosh trigger. A killer song.

To download the whole comp and to get more information about the festival, visit this Bandcamp page:

2 Responses to “FREE SHIT: THE A389 MMXI ANNIVERSARY BASH SOUNDTRACK”