Today we present Part 11 in the continuing rollout of our list of 2014′s Most Infectious Extreme Metal Songs. For more details about what this list is all about and how it was compiled, read the introductory post via this link. For the other songs we’ve previously named to the list, go here.

Today’s additions to the list are both by bands from my neck of the woods, i.e., the Pacific Northwest. One band has become a name known worldwide, the other is one whose name deserves to become much better known.

I’m long past caring about what kind of genre label should now be applied to the music of Agalloch, especially because I’m not sure a genre label has yet been invented that would suit the music on their latest album, The Serpent & The Sphere. It splices together so many strands of disparate music, from folk to prog to black metal to rock to doom, in contrasting and often surprising ways. It’s both complex and simple, both thunderous and sublime, a work that’s both earthy and mystical, and Billy Anderson’s production masterfully brings the band’s songwriting creativity and instrumental skill to vibrant life.

So many of the songs on The Serpent & The Sphere have gotten stuck in my head. I’ve really struggled to decide which of them was the right choice for this list — because one of my self-imposed constraints is to pick no more than one song from any individual album. The one I chose isn’t the best song on the album — I think the long, magnificent instrumental piece “Plateau of the Ages” is probably the album’s crowning achievement, and I seriously considered it for this list as well. “The Astral Dialogue” was another that proved to be a strong contender. But even though it may not be the best song on the album, I do think “Dark Matter Gods” is the most infectious — and I do love it.

To quote from Andy Synn’s NCS review: “A shining synthesis of mood and melody, ‘Dark Matter Gods’ marries void-like post-metal ambience to an undercurrent of scintillating obsidian electricity….” And I’ll add that it rocks damned hard, too. 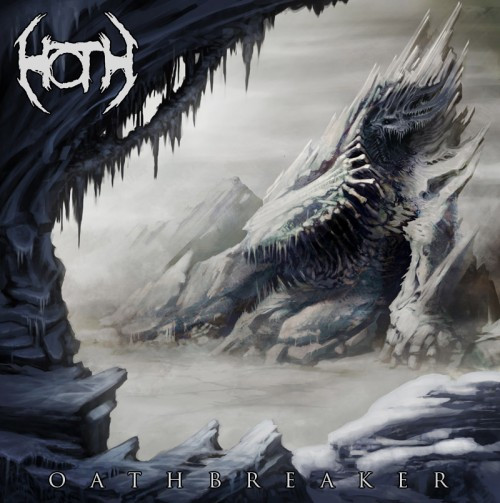 For me, Oathbreaker proved to be one of the brightest, best, and most surprising discoveries of 2014. The two members of Hoth (David Dees and Eric Peters) reportedly live in the Seattle area, as I do, but I don’t think they’ve ever performed live and until a friend pushed me to hear Oathbreaker, I didn’t know their names. But what they’ve accomplished on this, their second album, is remarkable.

The album conceptually tells the story of one man’s descent into darkness, a thinly veiled narrative of Anakin Skywalker’s transformation into Darth Vader — but you don’t need to be a Star Wars geek to appreciate the lyrical narrative or the incredible music. The multi-faceted music itself reflects the progression of the story, the album seamlessly incorporating a multitude of different stylistic elements as it changes the mood from the beginning to the end. Icy black metal may be the most dominant motif, but folk metal and melodic death metal have their place as well (just to name two of the album’s many genre ingredients).

Hoth have many strengths, but the ability to craft enticing melodies is certainly one of them. I think it’s fair to say that every song on the album is infectious. But the one I think takes the prize — and so earned its way onto this list — is a track that comes in the middle of the album and marks a turning point in the doomed narrative. Ironically, one aspect of the song that has made it such a favorite of mine is the deployment of clean vocals, chanting in Latin. Listen below to “Serpentine Whispers” (I’m including the lyrics below the song stream);

There is one always watching from the shadows disguised as an affable mentor,
one who knows the gifts of the darkness, his words reek o’ lies and a power unmatched
no one can sense his ever creeping influence, as he shrouds his ill will from his foes
he knows the young one’s passions will overwhelm all the somber vows he has sworn
slithering into his ears, a legend was passed down from the old master to the vile disciple
dark magic, dark desire, unnatural power – see the dead, stop the dying, save the ones he loves

the necromantic powers guised in white,
a noble cloth hides the fetid spirit
a bastard child born of prophecy,
misplaced hope of an age forgotten
his words are like the singing of serpents
songs the color of shadows
he blurs the line between good and evil
a false smile masking the deceit

sensing the young one’s power and lust, he grows ever bolder still,
a silver tongue conceals the bile of his nature – he wants to consume the stars:
“sit with me, my child, I know what troubles you, so listen to my words attentively:
become a god, create life – though some might hold these ancient secrets as unholy and unnatural”

3 Responses to “OUR LIST OF 2014’S MOST INFECTIOUS EXTREME METAL SONGS: PART 11”