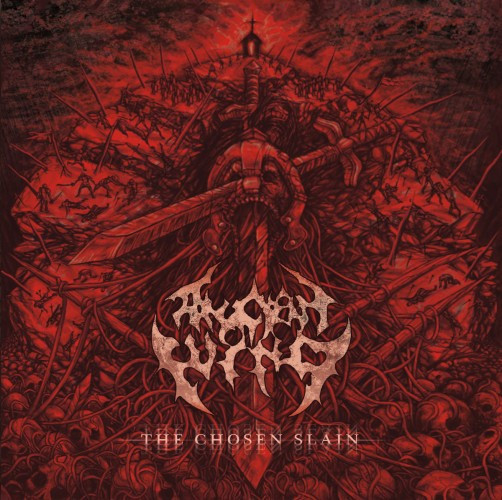 Ancient Wind are from Glenwood Springs, Colorado, but you wouldn’t guess that from their music. The Chosen Slain is their debut album, but you wouldn’t guess that either — because it sounds like something produced by a band with multiple albums already under their belts. But judge for yourselves — because you’re about to hear the album’s first single, “With Hate In Their Eyes”.

You won’t hear much David Alan Coe in “With Hate In Their Eyes”. What you will hear is a flurry of savage, galvanizing riffs, a thundering drum and bass duo, and acid-drenched, flesh-scarring vocal rasps and roars. The song launches a galloping, warlike assault accompanied by gripping melodies that fly like banners over a field of battle. It’s the kind of blending of melodic black metal and death metal that gets the blood pumping and conjures visions of an ancient, mythic time, and it’s performed with a lot of instrumental flair.

The Chosen Slain is the first major release from To The Head Records. and is due to drop on January 27. The digital album can be preordered on iTunes here  or on Bandcamp here. Physical copies and packages including shirts and stickers can be ordered from the label’s webshop, located here.

Enjoy “With Hate In Their Eyes”:

4 Responses to “AN NCS PREMIERE: ANCIENT WIND — “WITH HATE IN THEIR EYES””