As those who dwell in the underground already know, the seminal U.S. black metal band VON has embarked on an unusual audiovisual project: They are releasing their third album Dark Gods: Birth of the Architects  (which is itself Part II of a trilogy that began with 2013’s Dark Gods: Seven Billion Slaves) in 12 CD installments, with each of the 12 tracks accompanied by part of a comic book named Dark Gods written and illustrated by VON’s founder VENIEN!!! Each CD includes not only a version of a track from the album — which will be released in its entirety in March — but also a bonus track exclusive to the comic book.

Today we bring you a special two-part feature: the premiere of a demo teaser for the album’s 7th track “Black Lotus” along with an instrumental B-side from the CD called “Extinction”, plus an exclusive interview with VON’s drummer “Dirty FvKn! Pistols” and the band’s guitarist “HangMan”. The interview, conducted by e-mail, comes first… the images you will see are preview pages from the comic.

“Dark Gods: Birth of the Architect” is an unusual project – 12 songs released on a weekly basis, with each song accompanied by an installment of a 12-part “Dark Gods” comic book, with a variety of variant covers. For people who are just learning about this, could you explain the concept behind the story and the music?

Dirty Fvkn! Pistols:
The idea was to take the story each song told individually and release them as though someone was giving you a novel, one chapter at a time. Conceptually we already intended to intertwine them so it just made sense to us. We wanted a record that was more than just a bunch of songs, but rather its own entity within itself. It was important that each piece be the correct fit to make one cohesive unit in the end. 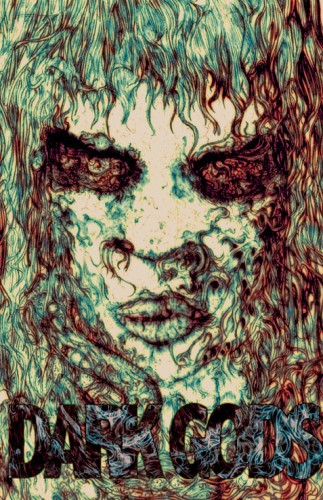 I understand that “Dark Gods: Birth of the Architect” is Part 2 of a trilogy of albums, which began with 2013’s “Dark Gods: Seven Billion Slaves” – with these 12 songs and the story they tell being themselves part of an even larger story. Is there a short way of explaining the entire 3-part album concept?

Dirty Fvkn! Pistols:
It has much to do with the progression musically from one record into the next, combined with the evolution of the entire story which spans the trilogy. The ideal being that each record can easily stand alone, but the true purpose is for them to be one body of work. How each record transcends into the next was an important concern considering the writing, production, dynamics, story, etc…

Have the songs for all 3 albums in the trilogy already been written and recorded?

Dirty Fvkn! Pistols:
Ancient Blood is the only one we haven’t recorded. We already have much of the material but it needs completion on numerous levels before tracking is even a thought. Aside from that, there are a number of B-sides we are trying to finish as well. 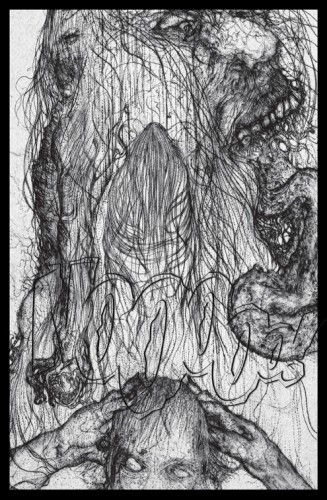 The teaser of the song we’re premiering today is named “Black Lotus”. How does this song fit into the narrative of the music and the story being told in the “Birth of the Architects” album and comic book?

Dirty Fvkn! Pistols:
In my opinion, it’s definitely the crux of the overall story in many ways. Not trying to be too vague. I’m a huge fan of stories that fit together like a puzzle as all these do. As I mentioned earlier about the songs, each one needs to be able to stand alone yet combined they make a complete body of work. Similarly, the stories follow suit in the same fashion.

VON’s roots in the history of U.S. black metal go back more than 20 years, and nothing stays the same, especially with that much time passing. I know you guys have only been involved with the project over the last 2 or 3 years, but how would you say the sound of VON today has changed from the early roots of the band?

Dirty Fvkn! Pistols:
Drastically, albeit, it makes complete sense to me in terms of the evolution musically. I feel the roots of what VENIEN!!! began then are still inherent and noticeable in much of what we’re doing currently. We just don’t do it the same way anymore. What would be the point in making the same record every time?!? That is what makes each record unique in its own way. Each one tells its own story for that period of time, yet is still part of the entire body of work in the end. 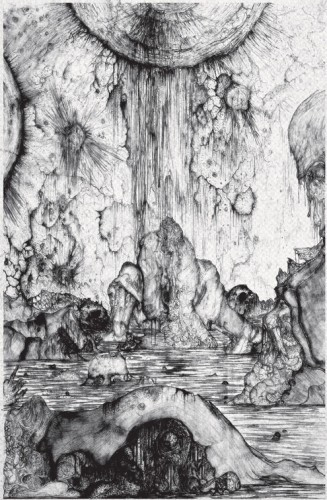 How did you become part of VON? And what attracted you about the idea of joining VENIEN!!! to carry VON’s name forward with new music?

Dirty Fvkn! Pistols:
VENIEN!!! (Jason Ventura) was recording Satanic and Seven Billion, and the drummer on those records (Charlie Fell) could not continue and recommended I come in to finish. I was under the impression this was just going to be another session gig as I’ve done a million motherfuckin times before. I didn’t even know who the hell J was. On the way to the studio, the dude I was with says, “you know that’s the VON guy right?” Had no idea and really didn’t give a shit one way or the other. I got there, and we just hit it off. It was refreshing to meet a cat that was straight up, no bullshit. We rapped about a bunch of shit for a while, just hangin like we’d been friends for years. Finally I said hey, you wanna play me those jams? That session churned out a lot of what became demos for Birth, which at the time was not the protocol. At that point he asked me if I wanted to throw down and be part of this thing. That was nearly three years ago. The vision is the primary reason I am here. I believe in the journey. It intrigues me on a level that is incomprehensible.

HangMan:
Tony (Dirty Fvkn! Pistols) and I have been jamming in Chicago with The Hang Union and my other bands for 7 or 8 years now, just kinda recording everything we do, booking shows and being stupid. I’m too anti-social to try to suck my way into the scenes but Tony was in with a lot of those people, doing session work and this and that, so him and VENIEN!!! linked up to work on VON and they hit it off. I don’t know much about the guitarists before me, but they weren’t working out so Tony told VENIEN!!! about me and all it took was a phone call.

I’ve always been attracted to the dark side of art in any medium, especially that which provokes the question “Why would someone do this?” When I was younger it led me towards Satanism, the Occult, and pentagram worship for a time, and I was really into it, it scared me out of it because I had some intense, real experiences that felt like I had given my soul to it and made me wonder, How real is this? When Tony called me to join VON it was almost like the devil had finally cashed the check, years after. It wasn’t quite what I asked for, but it was close, and that’s usually how it goes right? Ultimately I’m still doing the devil’s work, and not for the uptight delusional black metal elitists who talk about true VON as if they were fuckin’ there when it started, but for the people who have never heard of it and stumble upon it now. I hope it raises questions and perks that evil interest. It’s not about VON, it’s about what VON represents. What are these symbols? What is the Occult? If it attracts young people to the left hand path, then I am proud of contributing to that. 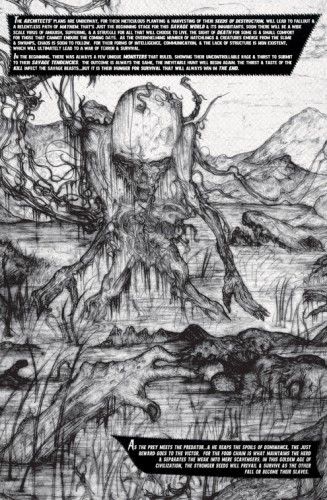 Could you give us a sketch about how the songs on “Birth of the Architects” were written and recorded and how each person contributed in that process, especially since all of you aren’t located in the same city?

Dirty Fvkn! Pistols:
Like I was saying, many of those songs from the first session I did with J wound up being demos for Birth. It tends to work like this… J comes to the table with some riffs and ideas. Then we discuss where we want this piece to go, not only musically but as the story it needs to represent. Much of the writing for Birth was us hangin out, burnin jibs on the porch while grillin food, and talkin through the landscapes. Once we figured out the correct vehicle to construct that would get the song where it needed to be, we then started tracking. This record was always bass first, as I prefer to drop grooves over a fat-assed bass line…then drums get dropped, then all the guitars, and vocals are last. Most of these tracks are 1-2 takes on everyone’s parts. I can only attribute that to the amount of time we took to prepare the forms and bounce ideas off one another. That’s one of the things I love most about our process. Everyone is open to suggestion, and J is always pushing us to do what we think is best for the material. Which in turn, brings the best out of us individually and as a band.

HangMan:
All the songs and the story, the concept, all were written by VENIEN!!!. He brought me and Tony down to the desert and every day was a new song. VENIEN!!! would play us some of the riffs, we’d talk about the form, and then record the foundation. Once that was complete VENIEN!!! would talk to me about the style of guitar he wanted and I would do my best to make his sonic vision come true. 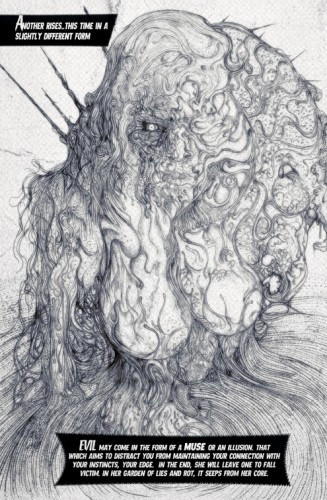 One wonders what “Black Lotus” will sound like in finished form on the album. As it is now, in this demo version, it’s otherworldly — a slow progression of vibrating bass tones and electronic noises that warble and shimmer like radiated waves from a dark star. VENIEN!!!’s distorted, whispering rasp crackles with an alien vehemence, proclaiming the burning to come, proclaiming “We are one”.

“Extinction” makes a fitting complement to the “Black Lotus” bass demo — a slow beat, a kind of black backwoods aura in the acoustic picking, a squalling, psychedelic guitar jam ripping through the rhythms. It’s a lysergic acid trip that includes a tumbling, somersaulting drum performance as the lead guitar continues to cast a psychoactive spell that becomes increasingly irresistible.

As these two new tracks amply demonstrate, VON’s music has changed dramatically from the days of Satanic Blood, but the musical vision that is now unfolding is one that’s more imaginative, just as arresting, and still black at its core. Listen below…

3 Responses to “AN NCS INTERVIEW AND A PREMIERE: VON — “BLACK LOTUS (BASS DEMO)” AND “EXTINCTION””